The new technology stores digital ones and zeroes by shifting the position of metals that form layers just three atoms thick. | Adobe Stock/gaihong

A Stanford-led team has invented a way to store data by sliding atomically thin layers of metal over one another, an approach that could pack more data into less space than silicon chips, while also using less energy.

The research, led by Aaron Lindenberg, associate professor of materials science and engineering at Stanford and at the SLAC National Accelerator Laboratory, would be a significant upgrade from the type of nonvolatile memory storage that today’s computers accomplish with silicon-based technologies like flash chips.

UC Berkeley mechanical engineer Xiang Zhang, Texas A&M materials scientist Xiaofeng Qian, and Stanford/SLAC Professor of Materials Science and Engineering Thomas Devereaux also helped direct the experiments, which are described in the journal Nature Physics. The breakthrough is based on a newly discovered class of metals that form incredibly thin layers, in this case just three atoms thick. The researchers stacked these layers, made from a metal known as tungsten ditelluride, like a nanoscale deck of cards. By injecting a tiny bit of electricity into the stack they caused each odd-numbered layer to shift ever-so slightly relative to the even-numbered layers above and below it. The offset was permanent, or non-volatile, until another jolt of electricity caused the odd and even layers to once again realign.

“The arrangement of the layers becomes a method for encoding information,” Lindenberg says, creating the on-off, 1s-and-0s that store binary data.

To read the digital data stored between these shifting layers of atoms, the researchers exploit a quantum property known as Berry curvature, which acts like a magnetic field to manipulate the electrons in the material to read the arrangement of the layers without disturbing the stack. 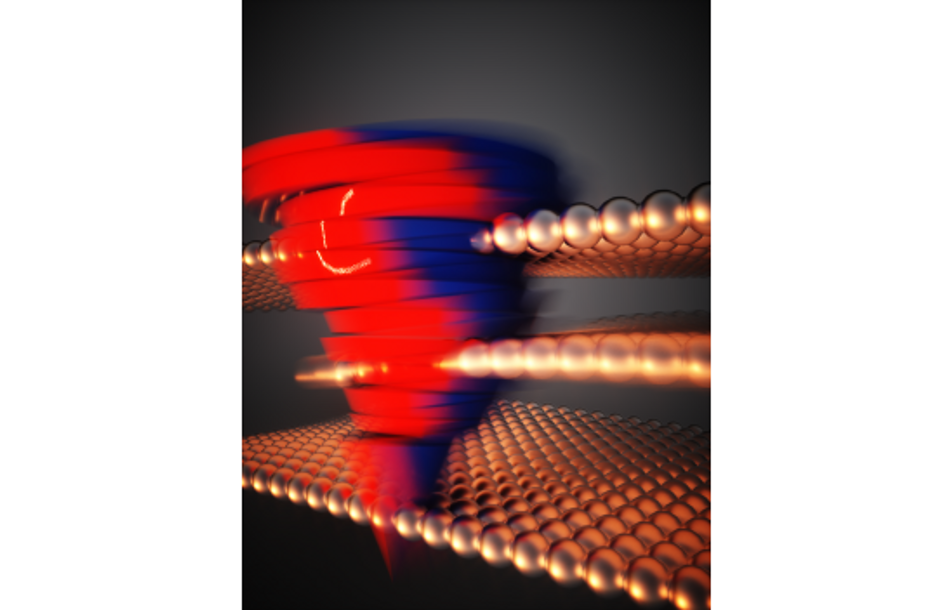 The swirling colors show how the middle layer of atoms shift, enabling electrons to encode digital ones and zeroes. | Image courtesy of Ella Maru Studios

Jun Xiao, a postdoctoral scholar in Lindenberg’s lab and first author of the paper, said it takes very little energy to shift the layers back and forth. This means it should take much less energy to “write” a zero or one to the new device than is required for today’s non-volatile memory technologies. Furthermore, based on research the same group published in Nature last year, the sliding of the atomic layers can occur so rapidly that data storage could be accomplished more than a hundred times faster than with current technologies.

The design of the prototype device was based in part on theoretical calculations contributed by co-authors Xiaofeng Qian, an assistant professor at Texas A&M University, and Hua Wang a graduate student in his lab. After the researchers observed experimental results consistent with the theoretical predictions, they made further calculations which lead them to believe that further refinements to their design will greatly improve the storage capacity of this new approach, paving the way for a shift toward a new, and far more powerful class of nonvolatile memory using ultrathin 2D materials.

The team has patented their technology while they further refine their memory prototype and design. They also plan to seek out other 2D materials that could work even better as data storage mediums than tungsten ditelluride.

“The scientific bottom line here,” Lindenberg adds, “is that very slight adjustments to these ultrathin layers have a large influence on its functional properties. We can use that knowledge to engineer new and energy-efficient devices towards a sustainable and smart future.”

Experiments and theory collaborations at Stanford/SLAC National Accelerator Laboratory were funded by the U.S. Department of Energy, Division of Materials Sciences and Engineering through the Stanford Institute for Materials and Energy Sciences (SIMES).