Alloys could have applications for lithium-air batteries, recycling carbon dioxide into fuels

Researchers at Washington University in St. Louis and the University of Illinois at Chicago (UIC) have predicted and synthesized new 2D alloys with catalytic properties that can be used in lithium-air (Li-air) batteries and to reduce carbon dioxide (CO2), a greenhouse gas.

In research published May 25, 2020, in Advanced Materials, Rohan Mishra, assistant professor of mechanical engineering & materials science in the McKelvey School of Engineering at WashU, and John Cavin, a physics doctoral student in his lab, used quantum-mechanical calculations and thermodynamics to make predictions on the stability of 25 alloys of a class of materials known as transition metal dichalcogenides (TMDCs) that can be separated into atomically thin 2D layers. Two-dimensional materials are of interest for nanoelectronics because of their exceptional electronic and optical properties and for catalysis because of their large surface area. These predictions were then sent to collaborators at UIC, led by Amin Salehi-Khojin, who synthesized a subset of 12 alloys in the lab and confirmed all of them to match with Cavin's predictions.

Individual TMDCs have been found to be good catalysts to facilitate various chemical reactions that are important in Li-air batteries, fuel cells and for CO2 reduction. These three applications are important to reduce dependence on and to reverse the damage done by fossil fuel use, Cavin said.

"Catalysts can help separate oxygen molecules that are made up of a pair of oxygen atoms to individual atoms, then combine that with hydrogen to get water and energy in fuel-cell-powered cars, which currently use expensive metals like platinum as a catalyst," Cavin said.

Alloying has been shown to improve catalytic behavior in other classes of materials but has had limited applications in TMDCs.

"These alloys have not been largely explored because of a lack in understanding of their stability under relevant growth conditions," Mishra said. 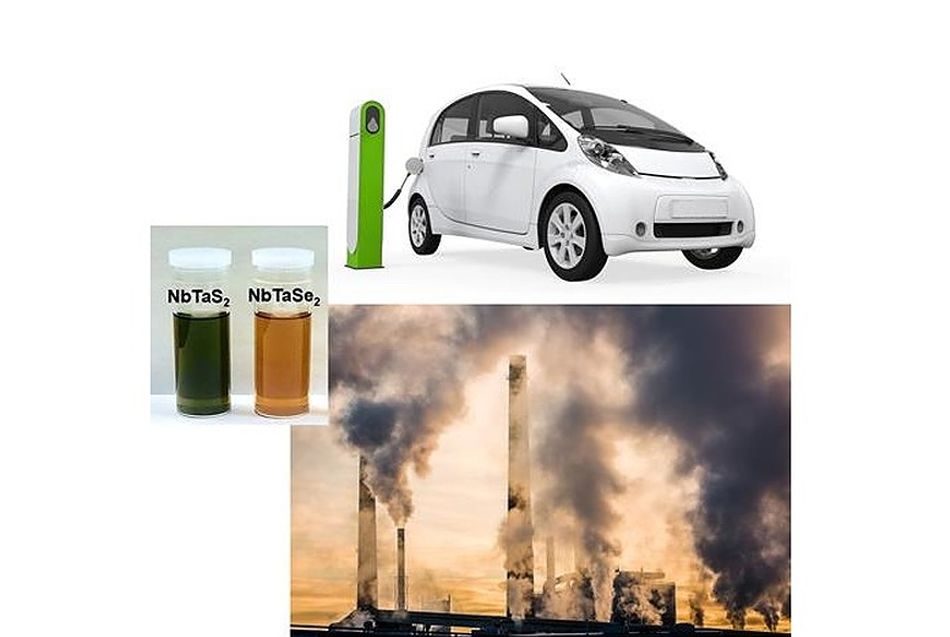 New alloys developed by a McKelvey Engineering and UIC team could be used in electric-car batteries and to reduce carbon dioxide (CO2).

Alloying is the process of mixing two materials with different properties to get a material that shows a combination of the properties or even new ones. However, not all materials are receptive to mixing. A classic example is water and oil, which separate when mixed because of the way their molecules interact. Similarly, some alloys are prone to separation due to the way their atoms interact.

Alloys that mix easily are referred to as miscible, Mishra said. Because the benefits of alloying are reduced through separation, having the ability to determine the miscibility of an alloy is valuable. Using considerable supercomputing resources, made available by the Extreme Science and Engineering Discovery Environment (XSEDE) network, which is supported by the National Science Foundation, Cavin calculated the miscibility of 25 TMDC alloys. Of those, nine were predicted to be miscible including four that had not been synthesized before.

The group at WashU also showed that increased growth temperatures could be used to mix some immiscible TMDC alloys. The second law of thermodynamics says that entropy, a measure of disorder, likes to increase. At higher temperatures, this effect is amplified and the high chemical disorder in a well-mixed alloy is preferred over the low disorder of a segregated alloy. Using these thermodynamic principles, the WashU group was able to determine the temperature required for mixing the remaining 16 immiscible TMDC alloys.

The team from UIC synthesized 12 of the predicted alloys using a scalable chemical vapor transport method. They performed characterization of the structure and composition of the materials from macroscopic to atomic scales using a suite of techniques, all of which confirmed Cavin's predictions.

In addition to their synthesis and characterization work, the team from UIC also tested the catalytic performance of one of the miscible alloys for CO2 reduction and for oxygen reduction in Li-air battery setups.

"Our colleagues characterized the properties, and found that an alloy of Niobium disulfide and Tantalum disulfide was excellent for CO2 reduction and for oxygen reduction," Mishra said.

Going forward, the researchers plan to explore other emergent properties of these alloys, including superconductivity, magnetism and topological insulation. Mishra has filed a provisional patent for the process/alloys with assistance from Washington University's Office of Technology Management.

The work stems from a $361,177 grant from the National Science Foundation as part of the Materials Genome Initiative launched by President Barack Obama in 2011 as a multi-agency initiative to create policy, resources and infrastructure that support U.S. institutions to discover, manufacture and deploy advanced materials efficiently and cost-effectively. It builds on work published in Advanced Materials in 2018 in which the groups looked at the catalytic activity of individual pure TMDCs.

"That was the motivation for us to do this," Mishra said. "Some showed good properties in one reaction and one for the other, and we wondered if we could mix them together to improve overall performance."

Fluorine found as possible substitute for lithium in rechargeable batteries

In his lab at WashU, Rohan Mishra plans to identify and develop a quantitative measure of structure-property correlations in materials, such as epitaxial thin films and materials with reduced dimensionality, using a synergistic combination of scanning transmission electron microscopy and atomic-scal...

Fluorine found as possible substitute for lithium in rechargeable batteries

Rohan Mishra and Steven Hartman in the McKelvey School of Engineering have found a potential alternative for lithium in fluorine, a relatively abundant and light element

Family of compounds could someday be useful for fuel cells, supercapacitors, catalysts, and sensors.