A novel, efficient model for whole-body 3D pose estimation (including bodies, hands and faces), trained by mimicking the output of hand-, body- and face-pose experts.

Estimating human poses from photographs and videos represents a major challenge in computer vision. The ability to recognize detailed 3D poses—defined by the location of a set of predefined ‘key points’, such as body joints—could enable avatar animation to be simplified, for example, or make human interaction with virtual content feel more natural. Pose recognition is also useful for teaching robots to perform tasks via human demonstration, as it makes their implementation far more intuitive and adaptive (1).

So far, pose recognition has been tackled by looking at specific body parts, such as the limbs (position of the arms and legs) (2, 3), hands (position of the fingers) (4) or face (position of eyes, nose, eyebrows, mouth and face contour) (5). To achieve a global understanding of human poses, though, one must capture information about all body parts at once. Animating an avatar in a realistic fashion, for example, requires the capture not only of limb position but also of facial expression and hand gesture, as finger poses and facial movements carry a great deal of non-verbal communication. Moreover, teaching a robot arm how to perform a task goes beyond the position of the arm to the hand; nuanced information about finger movement would be required to enable manipulation of an object, for example.

We’re proposing the first learning-based framework that can detect people in an image and estimate their whole-body pose (including body, face and hands) in both 2D and 3D, as shown in Figure 1 (6). Importantly, our aim is to tackle this problem in the wild, which means that our method must be robust to occlusion (where the object being tracked is partially obscured by another object or another person) and truncation at the image boundary (where the object is cut off at the corner or edge of the image). Our framework should also be able to accurately estimate poses in images that depict multiple people interacting either among themselves or with objects in the scene.

Figure 1: Example result of our approach for whole-body 3D pose estimation. The 3D poses of two people are accurately rendered in 3D from a 2D photograph.

The main difficulty in estimating poses arises due to the lack of in-the-wild training data with whole-body 3D annotations. The datasets currently available are generally captured in controlled environments, such as ‘mocap’ rooms. A model trained on this kind of data—with a single fully visible person and a fixed background—would not be generalizable to real-world images, due to the more complex interplay between people and objects. Although in-the-wild datasets are available for the sub-problems of body-, hand- and face-pose estimation, annotations are only provided for the key points of interest in each set. This means that while one dataset could include, for example, hand-pose annotations, information about facial features and the pose of other parts of the body would be missing. 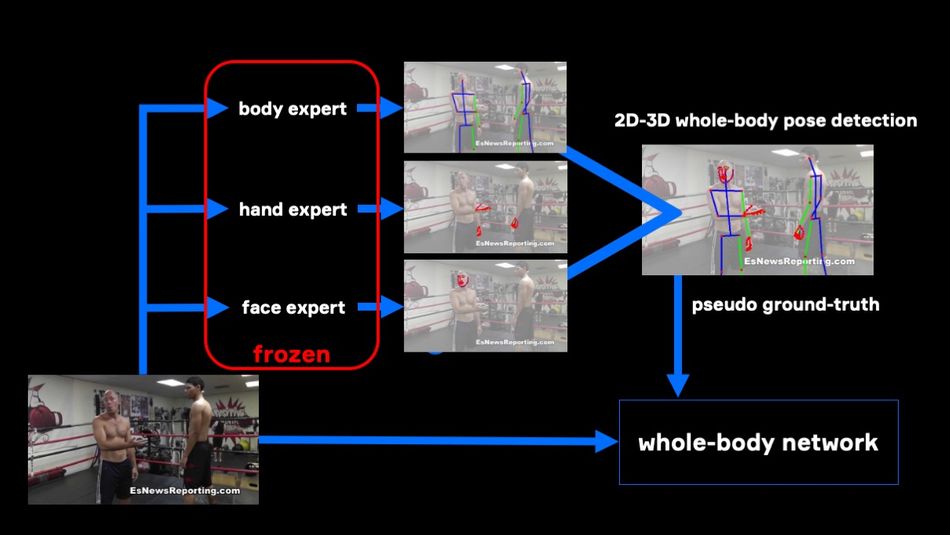 Figure 2: Schematic of our approach. Body, hand and face experts are combined to obtain whole-body poses and thereby create pseudo ground-truth annotations that can be used to train a whole-body network.

We propose leveraging these datasets to train a single network for whole-body pose estimation using distillation. More precisely, we use distillation to transfer the knowledge of several body-part experts into a unified network that outputs a more complete representation of the whole human body. An overview of our training framework is shown in Figure 2. Given a training image, a whole-body network requires ground-truth annotations—i.e. information about the exact 2D and 3D locations of every joint for each part—for bodies, hands and faces observed in the image. As we don’t have ground-truth data, we propose instead using an expert (a network specialized for 2D/3D pose estimation of a given body part) for each. In the example shown in Figure 2, we run a body expert, a hand expert and a face expert to obtain detections and 2D/3D poses for each. We then combine the estimations of the three experts to obtain detections for whole bodies that can then be used as pseudo-ground-truth annotations to train our whole-body network. Note that because we assume that these experts are already trained on dedicated datasets, they are frozen (i.e. do not change) during training of the whole-body network.

We also employ a distillation loss, which ensures the network makes predictions that are as close as possible to those made by the experts. Since we are distilling the knowledge of each part expert into a single network for whole-body pose estimation, we call our method ‘distillation of part experts’, or DOPE.

A network architecture for the detection of whole-body poses

Figure 3: Overview of body-pose-detecting architecture LCR-Net++. Convolutional features are extracted from an image and fed into a region proposal network (RPN), which generates candidate boxes around the people in the scene. These candidate boxes are fed into two branches: the first one performs classification among a predefined set of body anchor poses; the second one carries out an anchor-pose-specific regression to refine the estimated body pose.

DOPE uses a detection architecture where bodies, hands and faces are the objects detected in each image. To achieve this, we extend LCR-Net++ (2), a recently developed body-pose-detecting architecture that’s robust in a variety of challenging real-world scenarios (an overview is shown in Figure 3). As well as estimating body poses, LCR-Net++ has been adapted (4) to address the challenge of hand-pose estimation. Here, the anchor poses represent a set of particular hand poses and the regression is applied to the hand key points. Additionally, we adapted LCR-Net++ to tackle face-pose detection with facial features as key points. The original LCR-Net++ architecture and the adapted versions for hands and faces comprised the three part experts that we required for our architecture.

With a given image, LCR-Net++ extracts convolutional features and feeds them into a region proposal network (RPN) to generate candidate boxes that contain potential body instances. After the features of the image are pooled according to these boxes, additional convolutions are applied to separate the data into two branches. Of these, the classification branch detects the most similar pose from a discrete set of predefined anchor poses. Then, the regression branch applies an anchor-pose-specific regression to refine the predicted pose in both 2D and 3D. 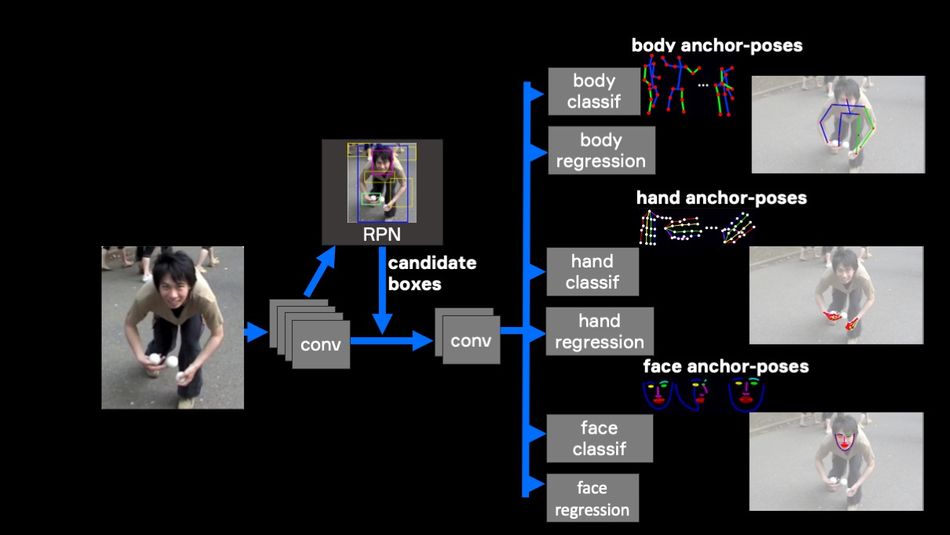 Figure 4: Overview of the DOPE (distillation of part experts) architecture. DOPE extends the LCR-Net++ architecture with classification and regression branches for bodies, hands and faces.

Our results: DOPE performs on par with the experts

Table 1: Performance comparisons between part experts for body-, hand- and face-pose estimation tasks with our whole-body model in terms of accuracy (%) show that DOPE performs on par with the experts on a range of datasets (MPII, MuPoTs, RenderedHand and Menpo). PCK: Metric for measuring the accuracy of the localization of body joints; PCK-h: with a matching threshold of 50%; PCK3D: for 3D. AUC: Area under the curve estimation.

Table 1 compares the performance of DOPE with that of the three experts (i.e. for body, hand and face) on a variety of datasets. To evaluate the body-pose estimation of the experts in 2D and 3D, we used the MPII and MuPoTs datasets, respectively. We evaluated hand-pose estimation in 3D on the RenderedHand dataset, and face landmark detection on the Menpo dataset. Our results show that DOPE performs on par with the experts and carries out multiple tasks with a network capacity comparable to that of a single expert. By comparing DOPE to a baseline (i.e. where unannotated parts are simply ignored during training), we observe a decrease of performance, especially for hands and faces. This performance decrease occurs because unannotated parts are considered as background during the training of our detection framework.

Video 1: A live demo of DOPE

Footage from a live demo of our approach (Video 1) shows that DOPE is fast even when performing in real time on relatively inexpensive equipment (a laptop with a GTX 1080 graphics card). For clarity, we only show the 2D poses, but 3D poses are also estimated. Our model detects multiple people in the scene and is robust to challenging conditions (such as truncation and occlusion).

Summarizing DOPE and next steps

DOPE is the first learning-based method to detect and estimate whole-body 3D human poses in the wild, and includes 2D and 3D key points for the body, hands and face. We successfully overcame the lack of training data that is available for this task by leveraging distillation from part experts to our whole-body network. We will present DOPE at the (virtual) European Conference on Computer Vision at the end of August. Code and models are available here.

In our future work, we intend to investigate whether using diverse unlabelled data can further improve the generalizability of our model. We also hope to improve the performance of the experts under challenging conditions—such as interactions with objects—for wider applicability. Finally, we plan to develop applications around DOPE (e.g. interaction with virtual avatars and robots).

This article was first published on the blog of NAVER LABS Europe.

What can Robotics Research Learn from Computer Vision Research?

What is Machine Vision?

NAVER LABS Europe is the biggest industrial research centre in Artificial Intelligence (AI) in France and owned by NAVER Corporation, Korea’s leading internet content services company and a leading global innovator. NAVER is focussed on seamlessly connecting the physical and digital worlds through...

What can Robotics Research Learn from Computer Vision Research?

What is Machine Vision?

You may not realize it, but machine vision technology is everywhere. Anything mass produced - from food to semiconductors to textiles - relies on machine vision to guide automation and check product quality.