The research objective is to accurately represent the three-dimensional flows and turbulence in the lowest layer of the atmosphere.

The wind is not just 'wind' – but a complicated arrangement of turbulent features that are influenced by the surrounding environment. Air turbulence is created by the landscape, but also by buildings, roads and wind turbines. In the ESTABLIS-UAS project, the German Aerospace Center (Deutsches Zentrum für Luft- und Raumfahrt; DLR) is researching these flow effects. For this purpose, a swarm of drones ascends and measures these phenomena. The results can be used, for example, to improve the arrangement of turbines in a wind farm.

"Wind turbines are among the most important technologies for sustainable energy supply, both in Germany and worldwide. The further expansion of wind energy requires a significant increase in the performance of wind turbines. For this reason, the DLR Executive Board has decided to increase the annual funding for wind energy research by one million euros with immediate effect," explains Anke Kaysser-Pyzalla, Chair of the DLR Executive Board. "DLR has been conducting research in this area for many years. Its activities make use of the many synergies with aerospace research. The work ranges from fundamental research to the further development of individual components in cooperation with industry."

"Understanding these turbulent, three-dimensional conditions plays an important role in the energy transition. This allows us to comprehend the loads to which wind turbines will be subjected during their lifecycle and to predict how much power they will feed into the energy grid," says project leader Norman Wildmann from DLR's Institute of Atmospheric Physics. Up to 100 drones take off from the ground in a fixed formation for the ESTABLIS-UAS (Exposing spatio-temporal Structures of Turbulence in the Atmospheric Boundary Layer with In-Situ measurements by a fleet of Unmanned Aerial Systems) project. The Unmanned Aerial Systems (UAS) measure wind characteristics, temperature and humidity with high resolution. Tests were carried out in advance with up to 20 of these small drones. They are particularly robust so that they can maintain their position and deliver results even at higher wind speeds. 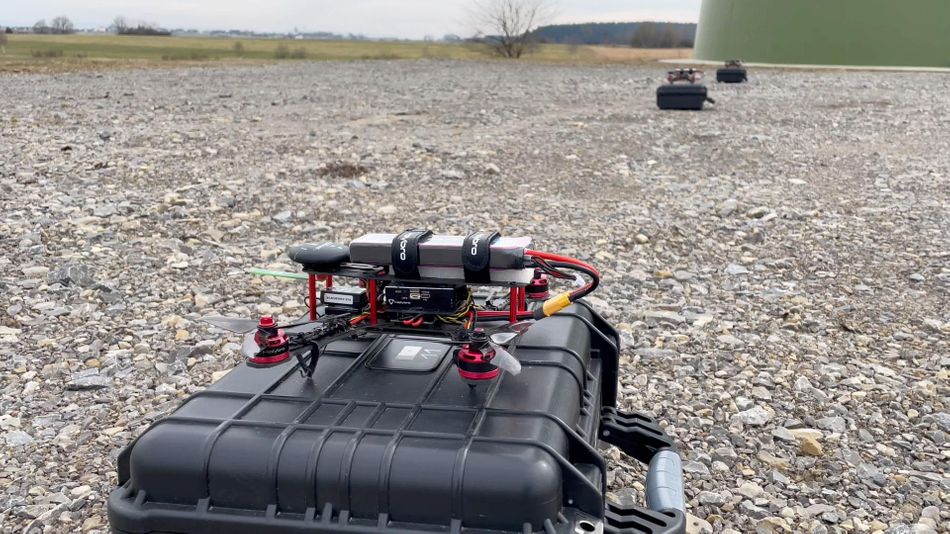 Wind turbines generate their own turbulent effects in addition to the flow phenomena that already exist. As such, one goal of wind energy research at DLR is to develop a model that clearly shows the effects on the turbines in the second or third rows of a wind farm. "There is still some need for optimisation here. The answers to questions about how the wind behaves at these points are very complex," explains Wildmann. "And this is not only dependent on the turbine, but also on local atmospheric conditions and the properties of the surrounding terrain. It is about a combination of the two."

In addition to measurements on wind turbines, experiments are planned in the wind tunnel at the University of Oldenburg, which is a partner in the Research Alliance Wind Energy (Forschungsverbund Windenergie; FVWE), and at the DLR Wind Energy Research Farm in Krummendeich. Two further measurement campaigns will take place as part of the international TEAMx initiative, which is dedicated to the study of complex flows in the boundary layer over mountainous terrain. All experiments will be supplemented by numerical simulations. Ultimately, a comprehensive model for the representation of turbulent flows will be created.

The lowest layer of the atmosphere – the 'Atmospheric Boundary Layer' (ABL) – is directly influenced by Earth’s surface. Exchange and transport processes in the ABL are mainly driven by turbulence, which extends over a large range of scales; some turbulent phenomena are a few millimetres across, others are over a kilometre in size. Physical models for the ABL, which extends from the ground to an altitude of approximately 2000 metres, are not yet very accurate. Turbulence from interconnected features such as gusts, slope and valley winds, cities, wind turbines or aircraft are difficult to capture. "The ESTABLIS-UAS measurements fill an observational gap between very small, local processes near the ground and large-scale observations by remote sensing, research aircraft and satellites," says Markus Rapp, Director of the DLR Institute of Atmospheric Physics in Oberpfaffenhofen. "Combining this with ground-based sensors and remote sensing enables completely new insights into the interaction of complex flow phenomena." These models could then also explain how turbulent flows influence the mixing of the lower atmosphere. This is important, for example, in the dispersion of dust, pollutants and aerosols.

EPFL researchers have used swarms of drones to measure city traffic with unprecedented accuracy and precision. Algorithms are then used to identify sources of traffic jams and recommend solutions to alleviate traffic problems.

Caltech Engineers have created a new data-driven method of controlling the movement of multiple robots in unmapped and cluttered spaces to avoid collisions with each other. This can be applied to real-life situations such as urban search and rescue to the control of fleets of self-driving cars.