Initial measurements made by the European CHaracterising ExOPlanet Satellite (CHEOPS) space telescope indicate that the giant planet, WASP-189b, located 326 light years from Earth, glows as hot as a small star as it orbits its central star at high speed on an unusual orbit that takes it close to the star's poles. At 3200 degrees Celsius, it is one of the hottest bodies of the over 4000 known exoplanets. The European Space Agency (ESA) mission, launched last year, enables the high-precision characterisation of extrasolar planets. Scientists from the German Aerospace Center (Deutsches Zentrum für Luft- und Raumfahrt; DLR) involved in CHEOPS contributed to the analyses, which have now been published in the journal Astronomy & Astrophysics.

"The planet WASP-189b was detected in 2018. Because of its unusual orbit close to its central star, we studied it with CHEOPS very early on," explains Szilárd Csizmadia from the DLR Institute of Planetary Research. "The precise measurements made with CHEOPS have now revealed its extraordinary characteristics: it is an ultra-hot planet, almost 1.6 times the diameter of Jupiter, and its orbit around its star is strangely inclined."

The CHEOPS space telescope was placed in a sun-synchronous orbit 700 kilometres above Earth on 18 December 2019. Since then, CHEOPS has been observing stars in our cosmic neighbourhood that are already known to be orbited by planets. It takes a so-called 'second look' at these exoplanets. Thanks to its ultra-precise measurements, CHEOPS is able to characterise these planets in detail, and thus greatly enhance our understanding of the formation and evolution of planetary systems. 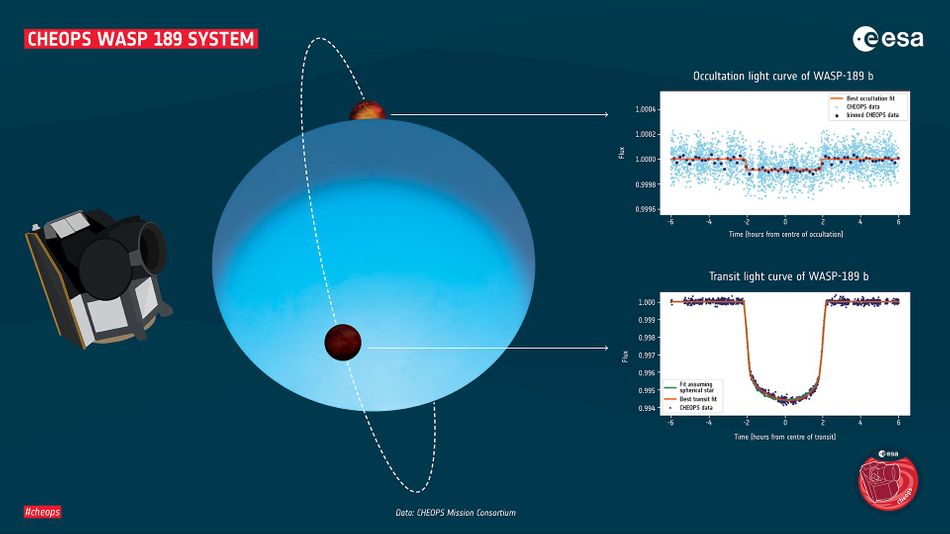 CHEOPS ob­ser­va­tions of WASP-189b in front of and be­hind its star, Credit: ©ESA

CHEOPS measures the dips in the observed light intensity of a star when an orbiting planet passes in front of it with great accuracy. In addition to measuring a primary transit event of WASP-189b, when the planet passes across the line of sight between the observer and the star, CHEOPS was also able to measure the much smaller dip during the secondary signal when the planet disappears behind the star with respect to the observer. These extremely precise measurements of such an occultation allows the temperature of the planet to be derived. It was determined that WASP-189b has a surface temperature of approximately 3200 degrees Celsius, hotter than almost any other exoplanet known to date. At such temperatures, all rocks and metals melt and become gaseous. By way of comparison, the Sun has a surface temperature of almost 6000 degrees Celsius, but some small M dwarf stars have temperatures well below 3000 degrees Celsius.

Orbiting at approximately 7.5 million kilometres from its star, WASP-189b is 20 times closer to its star than Earth, which orbits the Sun at a distance of about 150 million kilometres. One orbit takes only 2.7 days to complete. The star around which it orbits is larger and over 2000 degrees hotter than the Sun, and therefore appears to glow blue. "Only a handful of planets are known to exist around stars this hot, and this system is by far the brightest," says Monika Lendl of the University of Geneva, Switzerland, lead author of the new study. "WASP-189b is also the brightest hot Jupiter that we can observe as it passes in front of or behind its star, making the whole system really intriguing." 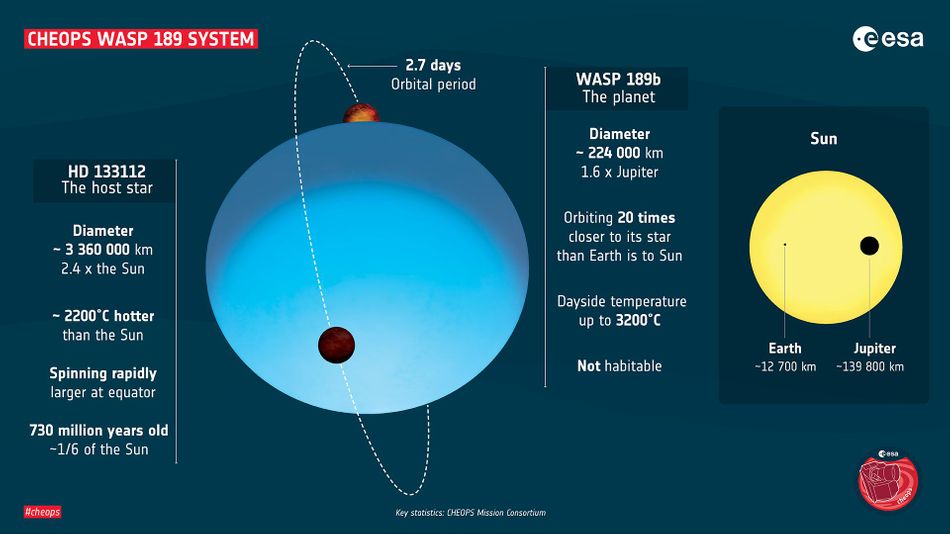 Transit measurements make it possible to determine the planet's radius and orbital parameters and to learn about the shape of the planet and its star. With an equatorial diameter of about 220,000 kilometres, WASP-189b is almost 1.6 times larger than Jupiter – larger than previously thought. The star itself also had a surprise in store for the researchers. Instead of a perfect sphere, the star rotates so fast that it deforms. As a result, the equatorial radius is greater than the polar radius. This causes the star to be cooler at the equator and hotter at the poles, making the poles appear brighter. In addition to this unusual asymmetry, the planet's orbit is not in the equatorial plane of the star, as would be expected if the star and planet developed from a common disk of gas and dust that passes on its rotational direction to its planets, as is the case in the Solar System. The orbit of WASP-189b, however, passes over the poles of its star.

Such an inclined orbit leads to the unsolved question of how the 'hot Jupiter' was formed. It is thought that such an inclined orbit is possible when a planet forms further out from its star and is then driven inwards. This could occur either when several planets within a system crowd into one orbit or when an external influence – such as another star –- disrupts the system and forces the gas giant towards its star and into a very strongly inclined orbit. The strong inclination of the planetary orbit suggests that WASP-189b experienced such a strong interaction in the past. 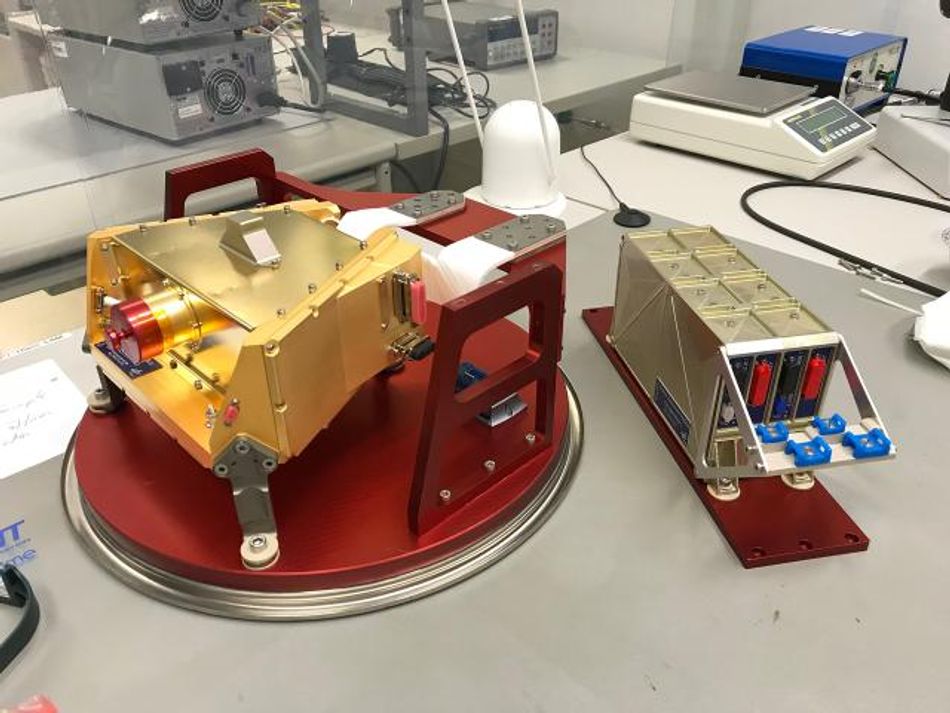 ﻿Focal plane module for acquisition sensor and sensor control electronics module
Two electronic modules from the Berlin Institute of Optical Sensor Systems are DLR's hardware contribution to ESA's CHEOPS mission. The focal plane module (FPM, left), the heart of the measuring instrument, contains the CCD detector with its electronics. In order to observe very small variations in starlight, the thermal requirements are enormous: The CCD detector and the subsequent low-noise electronics must be kept at a constant working temperature. The temperature fluctuations must not exceed one hundredth of a degree Kelvin (10 millikelvin). The Sensor Electronics Module (SEM, right) contains additional electronics to control the sensor (e.g. temperature controller, processor and software). Credit: DLR (CC-BY 3.0)

CHEOPS' high-precision observations and optical capabilities made it possible to discover the unusual properties of WASP-189b's planetary system. CHEOPS opened its 'eye' in January this year and began routine scientific operations in April. Heike Rauer, Director of the DLR Institute of Planetary Research in Berlin-Adlershof, is enthusiastic: "The accuracy achieved with CHEOPS is fantastic.” As a CHEOPS project scientist, she is optimistic about the future of the mission: "The initial measurements already show that the instrument works better than expected. It is allowing us to learn more about these distant planets." Thousands of exoplanets, the vast majority of which have no direct equivalent in the Solar System, have been discovered in the last quarter century, and many more will be identified with current and future ground-based surveys and space missions such as PLATO.

Over the next few years, CHEOPS will monitor hundreds of previously identified planets orbiting bright stars, building and expanding on existing knowledge, as was done for WASP-189b. The mission is the first in a series of three ESA science missions focusing on the detection and characterisation of exoplanets. But CHEOPS also has significant discovery potential of its own – from identifying worthwhile observation objects for future missions, to exploring exoplanetary atmospheres and searching for other planets in known planetary systems.

CHEOPS is a mission of the European Space Agency (ESA) that was developed in close cooperation with Switzerland. The scientific consortium is led by the University of Bern, with significant contributions from Austria, Belgium, France, Germany, Hungary, Italy, Portugal, Spain, Sweden, Italy, Portugal, and the United Kingdom. The German Aerospace Center (DLR) is involved in the scientific evaluation of the CHEOPS data. DLR's Berlin-based Institutes for Optical Sensor Systems and of Planetary Research contributed two electronic modules, the heart of the satellite telescope and the focal plane module containing the CCD detector, whose thermo-mechanical stability enables high-precision measurements. DLR also developed algorithms for the scientific evaluation of the measurement data.