Iron, sodium, magnesium and sulphur – with these four simple chemical elements, Maksym Kovalenko, Assistant Professor for Functional Inorganic Materials at ETH Zurich, together with his colleagues at Empa (the Swiss Federal Laboratories for Materials Science and Technology) in Dübendorf, intends to build a high-performance battery.

The researchers’ goal is to overcome a fundamental dilemma associated with the use of batteries for storing electricity. The ground-breaking lithium batteries now used in, for instance, laptops, smartphones and electric cars are efficient but they are not well suited for large, stationary installations. Lithium, a light element, is available only in limited quantities, making it an unlikely candidate for large-scale use in building electrical storage devices.

What Kovalenko has in mind are battery systems that are 1,000 times larger than the batteries in electric cars. The Ukrainian-born researcher is certain: “For this type of installation, we need economical materials that are available in sufficient quantities.” Placing such strict demands on your work is, of course, extremely limiting for a researcher. After all, it leaves very few elements in the entire periodic table that can be considered as potential candidates.

Pyrite is a key factor

Despite this demanding restriction, Kovalenko achieved initial success. The battery prototype he developed consists of a magnesium anode and a cathode made of crystalline iron sulphide, also known as pyrite or (popularly) fool’s gold. As the electrolyte, the researchers use a solution of magnesium and sodium ions. The test battery in the lab withstood 40 charging and discharging cycles with no significant decrease in performance – a promising result for further development.

It will, however, be some time before such batteries are ready for practical application. “We really are just in the early stages of research,” Kovalenko explains. “When you consider that it took 30 years to develop lithium batteries to their current capacity,” he continues, “it’s clear that it will take several years to bring lithium-free batteries like ours to market.”

Battery technology is a high-profile issue. “But this is actually just a small part of my work, even if it is a very important field,” he explains. “The other main focus of my research at ETH,” says the chemist, “deals with new semiconducting materials.” His goal is to develop materials that are either better or cheaper than today’s compounds – or ideally both. His hope is that new materials will give fresh momentum to various sectors, such as radiation detectors, solar cells or the manufacture of displays or LED lights.

Kovalenko has high hopes for halides. These materials combine metals – for instance, caesium and lead – with halogens, such as chlorine, bromine or iodine. Such compounds, known as metal halide perovskites, have ideal characteristics for the applications mentioned above. They are capable, for instance, of converting blue or ultraviolet light to any visible colour. “Our goal,” says Kovalenko, “is to develop materials that are at least as good as those quantum dots used by major display manufacturers today.” These companies usually use indium phosphide or compounds containing cadmium.

The halide nanoparticles emit a rainbow of colours depending upon their composition. Combining caesium and lead with chlorine yields blue colours. Replacing the  chlorine with bromine causes the materials to emit green. Adding iodine results in red tones; mixtures of these halides produce any other colour between those three. (Photograph: Maksym Kovalenko)

The materials Kovalenko’s group analysed, which are produced as nanoparticles in a suspension or in a polymer matrix, offer two advantages: they are very economical to manufacture, and they are highly efficient emitters. They produce pure colours, meaning that lower energy losses arise from colour filtering in LCD displays, and correspondingly higher energy efficiency can be attained than in the case of conventional phosphors.

Although development has now advanced to the point where these new compounds are now being used in the development of commercial products, as a basic researcher, Kovalenko still has a lot to do: How exactly do the nanoparticles grow in the suspension? What is their surface chemistry like? And how do the particles behave when they are embedded in a polymer? Can we fully replace heavy metals in such applications, retaining the colour gamut of the lead-based counterparts? “The great challenge is to maintain the luminosity of these particles when we transfer them from the suspension to a solid form,” says the chemist.

These halide semiconductors are also of great interest in another field: they could be used to detect gamma rays, arising, for instance, from radioactive substances. “There are at present very few materials that can measure this form of radiation at room temperature,” explains Kovalenko, “and the best one is relatively expensive, too.” The need for affordable materials that can register radioactive decay will increase in the coming years – not only in medicine or research, but also, for instance, in security. In Kovalenko’s words: “In view of the current threat of terror, it would be helpful to have an affordable material that could detect this radiation at low levels. Then we could equip security personnel around the world with such detectors.”

However, implementing this isn’t exactly easy: it takes a relatively thick semiconductor comprising heavy elements to even be able to detect the high-energy photons in the gamma radiation. That’s why Kovalenko favours materials containing lead or caesium. “We’re currently able to use these materials to produce nanoparticles. But for the detectors, we’re developing millimetre to centimetre-size single crystals – which is one million times larger than the nanoparticles.”

The chemist is now researching how to grow such materials from aqueous solutions or other solvents at low cost. “We need to develop a method for each compound of potential interest, and there are hundreds of such compounds to be tested as hard-radiationdetectors,” he says, adding, “it will take a lot of persistent work to get to that point.” In any case, one thing is certain: for these new materials, a high-temperature growth from melts is no longer needed, but rather “only” an aqueous solution that doesn’t even need to be particularly pure, as crystals purify themselves when they crystallize. 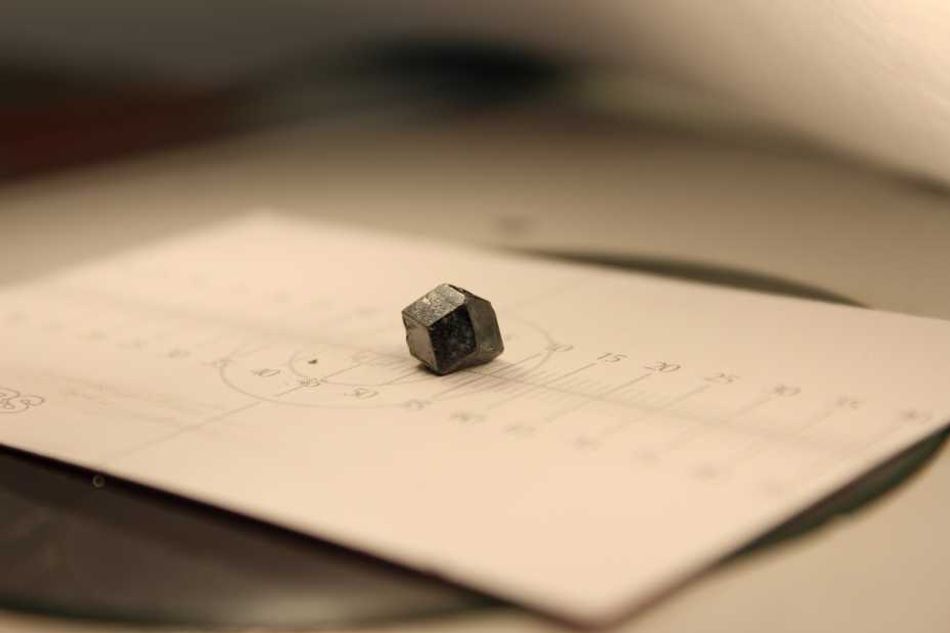 Kovalenko’s work on batteries and new semiconductor materials spans two very different fields that have few direct points of contact. “Working in these fields is a balancing act,” he says. “It’s a major challenge, but also a huge asset,” he continues, “as each of these topics gives me fascinating insights into how materials work.”