The value of automotive lightweighting reaches far deeper than zero-to-sixty times and top speeds. Safety, manufacturing costs, operating costs, and environmental sustainability can all directly benefit from more clever uses of lightweight materials in getting us from point A to B.

Lighter vehicles can be safer vehicles: crashworthiness boils down to dissipating kinetic energy and transferring momentum, both of which scale with mass, and both require deformable and crushable hollow structures (more on this later) to do so.

Far from last, lighter vehicles are cheaper to operate because they are more fuel-efficient and consume less electricity. Better fuel economy and power efficiency reduce emissions, amounting to environmental benefits across the automotive industry.

Where things begin to get interesting is when these effects are coupled, and the savings begin to compound and multiply. Vehicle weight eliminated from the chassis structure permits a smaller and lighter motor and lighter brakes and suspension. The whole vehicle weighs substantially less, and the chassis can be revisited and lightened further. This adds to potentially higher performance, safer, and more efficient vehicles. Mass decompounding in an automotive design context. With a lighter chassis, a smaller (and lighter) engine is required to achieve the same performance. That, in turn, means smaller brakes to decelerate the lighter vehicle and a further-lightened chassis to support these lighter subsystems. This can add to secondary mass savings far greater than the initial weight reduction task.

These are referred to as “secondary mass savings” or “mass decompounding.” You can read more about these in this paper from MIT and General Motors if you’re interested. With a blank-sheet design opportunity, they estimate that (on average) every pound of savings on structural, load-bearing parts provides an opportunity to save nearly a pound on subsystems (steering, brakes, suspension, etc.). That’s essentially a two-for-one deal! This figure decreases as the design cycle progresses and subsystems are locked in, so weight reduction should be considered in design as early as possible to maximize these compounding effects.

Does lightweighting come for free? Certainly not. But with the aforementioned value propositions, it is easy to see why there is so much focus on it in the auto industry today.

New technologies almost always cost more than what they replace, at least during their initial implementation. Aluminum was once seen as an aerospace-only material due to cost, with cast iron and steel dominating the automotive bill-of-materials for many years.

In retrospect, this is almost surprising to realize with aluminum now so widespread in our cars and trucks today. We are right in the midst of the same phenomenon with composites. Not long ago, carbon-fiber-reinforced composites were relegated to aerospace and Formula One, eventually trickling down to the supercar market. Now they are rapidly expanding into the mainstream market, with some manufacturers already building large body panels entirely from polymer composites for family sedans and small hatchbacks. Two associated trends in lightweighting: 1) Implementation timeline of new material systems: generally, in the quest for lightweighting, engineers may consider these material systems in roughly this order. 2) Exchange constants: indicators of the value or utility of lightweighting over the vehicle’s lifetime (i.e., fuel efficiency, payload capacity, etc.). While these values are useful as general guidelines, specific cases can sometimes land in unexpected regions of this chart (for example, spacecraft-tier exchange constants for high-end racing bicycle components). Koenigsegg appeared to have launched the metal additive trend for the production of end-use car parts in 2014, with a 3D-printed stainless steel variable turbocharger and a 3D-printed titanium exhaust component which saves a kilogram over its machined aluminum predecessor.

Of course, these are 1300+hp multi-million-dollar cars, but it marks the start of the metal additive age in the automotive industry. Since then, several larger manufacturers have begun to adopt additive manufacturing in serial production at much larger production volumes. This trend will only continue as the manufacturing technologies mature and become less expensive, just as they did with light alloys and carbon fiber.

However, unlike light alloys and composites, the expansion of additive technologies may also eliminate a significant amount of tooling (a substantial investment in both time and cost for manufacturers) — both through part consolidation and technological progress towards nearer-net-shape finishes in additive manufacturing processes.

Unfortunately, lightweighting is not as simple as substituting new, stronger, and lighter materials. Even if it were, the opportunity of that new material or manufacturing process would likely be underutilized.

Recall the ‘black aluminum’ phenomenon with composites: simply rebuilding a sheet metal design with a composite was not the best use of this new material, nor were conventional simulation and validation approaches suitable. Things like anisotropy, ply stack terminations, size/edge effects, etc., were all new effects to consider in the design process.

Engineers had to start at a micromechanical level, first understanding things like fiber-matrix failure mechanisms and establishing certification methods, and then working their way up to design guidelines and repeatable workflows and processes. Years later, however, composites are everywhere, and it is hard to envision going back without them. It is much more a gentle transition than an overnight revolution.

A multi-scale understanding of new material systems is required before they can be effectively deployed. This requires substantial research effort up-front in first understanding the micromechanics of the material systems, then building certification and testing methods, and ultimately design guidelines and repeatable processes. This took decades for composite materials and is still evolving. We are only on step two for additive manufacturing, but it appears the industry is progressing faster than ever. (Inset micrograph for “Metallic Alloys” from Olympus .)

The same is true for additive manufacturing and advanced generative/organic topologies. It is perhaps even more true for lattice structures and architected materials, though the potential return on these is also much greater. With additive’s much less restricted design space (any reader remaining at this point will likely agree that ‘unrestricted’ is not entirely accurate for AM), generating and iterating on design candidates becomes burdensome with conventional modeling tools.

If creating the models is difficult and slow, the simulation and validation will be even more critical now that we have less wiggle room and factor-of-safety to work with as we approach an optimum solution. A somewhat synergistic effect is that, because these advanced manufacturing technologies and lightweight structural materials generally cost more per pound, there is even more motivation to use them efficiently.

With topology optimized designs, a key obstacle to real implementation is that the results are often solid lumps formed by simple compliance minimization algorithms. The trouble here is that solid blobs do not collapse and crush very smoothly, and automotive engineers often require hollow tubes instead.

However, as any CAD engineer would know, shelling a complex organic part can be an unexpectedly difficult task, even if it is just of constant wall thickness (unlikely to be an optimal distribution of material). Conventionally, engineers have struggled to manufacture what they design, but with additive, it is often reversed: it can be difficult to design what you’re able to manufacture. Conventional topology optimization is step one of load-path identification and generally produces solid parts. Most automotive parts need to be hollow for crashworthiness to allow energy absorption through large plastic deformations (i.e., crumple zones and crush tubes). An advanced design technique is to shell the part with the wall thickness directly based on stress data and iteratively validate this with crash simulations. 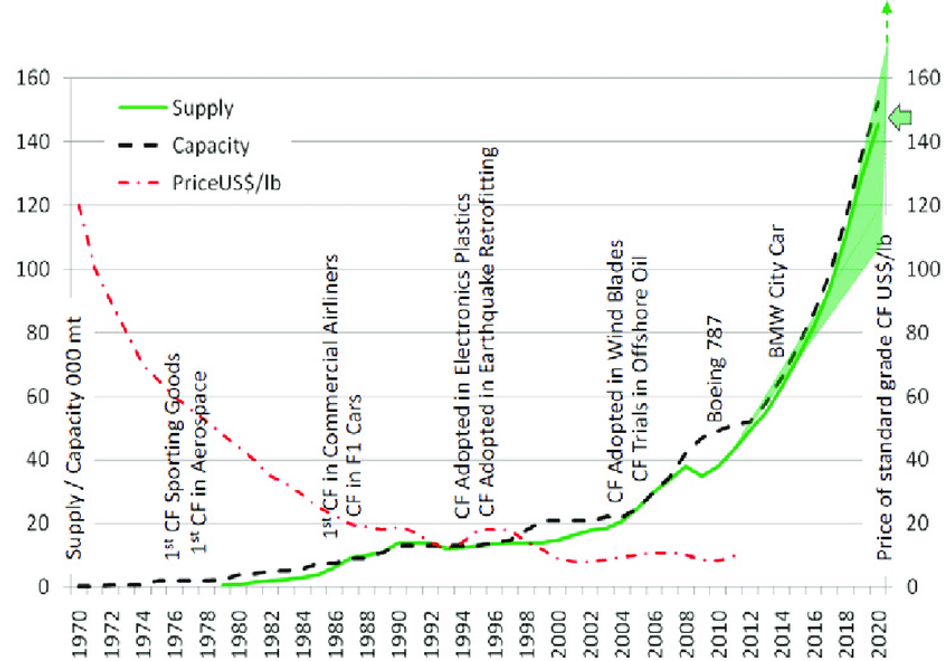 This diagram helps to comprehend the rise in supply and the decrease in the price of carbon fiber composites over the last 50 years. With the introduction of more and more applications for the hybrid material, the demand continues to increase while the price sits at a very affordable $10-15 per pound.

However, advanced materials are only as effective as the shapes in which they are formed; topology is half the battle. One aspect that has been lagging and is becoming an increasingly glaring bottleneck is the fragmented and expensive alphabet soup of upstream design tools (CAD, CAM, CAE, etc.).

It is surprising how many hours (and therefore dollars) each handshake between these acronyms can actually represent. We sometimes hear of days being spent reconstructing the native geometry of a shape-optimized density field and weeks wrestling sketch relations and offsets if one were to shell it for crashworthiness requirements. Of course, the latter requires remeshing and revalidating to adapt the wall thickness locally and will hopefully be the final iteration of this whole process (which it rarely is). The design effort required to trim out those final few pounds increases exponentially.

There is a glaring need in the automotive industry for design tools built on solid and modern foundations, foundations designed for these new materials and technologies. However, just as some classical materials still have their place in production (cast iron brake disks and engine blocks), so too will existing tools and procedures, like clay modeling or drafting in CAD. Some of the many mixed data sources involved in modern engineering. Each of them has value but also limitations. A hybridization or data-fusion approach allows engineers to optimize their parts to previously unimaginable levels. Where the arrowheads lie on each of these lines is often case-specific, and more (or fewer) data sources may apply.

In the quest for lightweighting, the same will hold true of design tools. Instead of mixed-materials, we have mixed data sources: surfaces from CAD, meshes from FEA, density fields or stress results from CAE, and real-world measurements like scan data or digitally-imaged strains. Like physical materials, these too can be synthesized and fused digitally to reach new performance levels.

We need new tools to do this mixed-material, multi-objective design and optimization process — considering all of the mixed data sources being used where they’re best suited. This is where computational modeling fits in, enabling this data-fusion approach to engineering design. The many factors and measurements relevant to the engineering process can be synthesized into one high-performance design representation. With this new multi-factor approach to design, we can begin to exploit the many simultaneous lightweighting opportunities available in automotive fully.

This case study was first published on the nTopology blog.

Online Manufacturing is the key to price-stable custom parts procurement

Online Manufacturing is alleviating the problem of material price fluctuations - enabling companies to focus on innovation.

With sustainability near the top of most organisations’ agendas, we, with Design Council, explored how to use life cycle analysis to develop more sustainable products and solutions.