Natural photosynthesis evolved to covert water and sunlight into oxygen (O2) and stored chemical energy. In plants this process is not very efficient, however the possibility to convert sunlight into chemical fuel in an economical and globally scalable manner is a very attractive method for reducing our dependence on fossil fuels. As such, scientists have been searching for routes toward efficient and inexpensive mimics of natural photosynthesis for decades. It turns out that the O2 production step is quite tricky and remains a major challenge toward artificial photosynthesis. 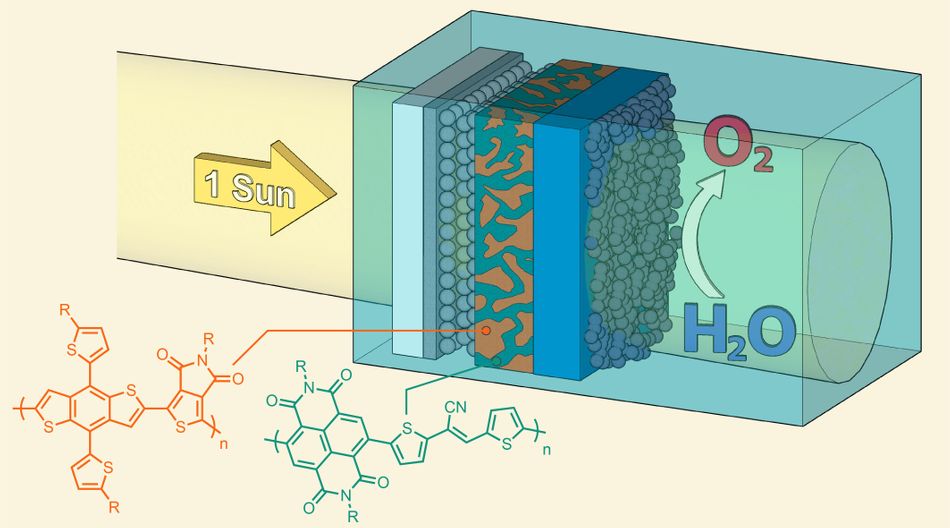 Compared to previously-reported systems, which employ inorganic materials such as metal oxides or silicon and have not met the performance and cost requirements for industrialization, the polymeric materials reported in this new work have molecularly tunable properties, and are solution-processable at low temperature, allowing large scale device fabrication at low manufacturing cost.

The EPFL team’s breakthrough was realized by tuning the properties of the polymers to match the requirements of the water oxidation reaction and by assembling them into what is called “a bulk heterojunction” (BHJ) blend that further improves the efficiency of the solar-driven catalytic reaction. By also optimizing the conduction of the electronic charges in the device by using carefully engineered interfaces, they realized the first demonstration of a water oxidizing “photo-anode” based on a BHJ polymer blend that exhibits a benchmark performance to date - performing two orders of magnitude better than previous organic-based devices. Moreover, the team identified key factors that influence the robust performance of O2 production, which will help define paths forward to further improve the performance.

By virtue of the potential of this approach, the system developed by Prof. Kevin Sivula and colleagues could substantially contribute to advancing the field of polymer-based electronics and establishing a promising route towards economical, efficient, and scalable solar fuel production by artificial photosynthesis.