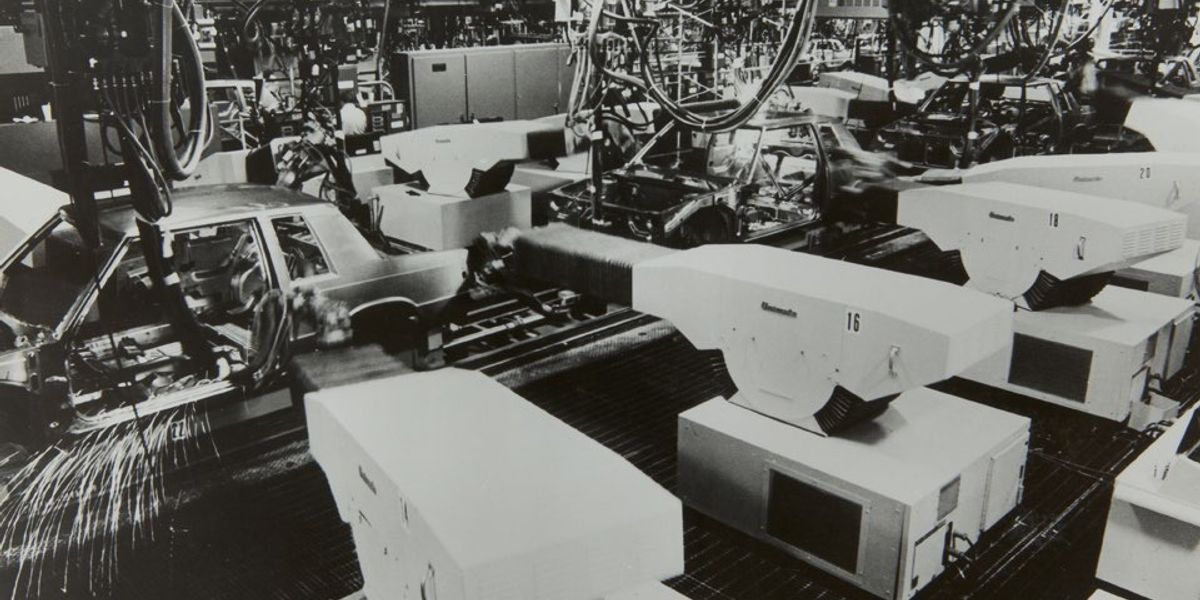 Article 2 of our Cobot Series: Driven by advances in software, sensors, and electronics, the market for industrial robots has greatly evolved over the past half-century. In today’s industrial workspaces, the evolution continues with collaborative robots—or cobots—working side-by-side with humans.

This is the second article of an eight-part series that explores how collaborative robots or cobots are transforming industrial workspaces. It will survey the technologies that have converged to make robotic influence possible, unpack the unique engineering challenges robotics pose, and describe the solutions that are leading the way to the influential robots of the future.

The articles were originally published in an e-magazine, and have been substantially edited by Wevolver to update them and make them available on the Wevolver platform.
This series is sponsored by Mouser, an online distributor of electronic components. Through their sponsorship, Mouser Electronics supports spreading knowledge about collaborative robots.

Industrial robots are often discussed in the context of 21st-century innovations. However, their roots date back much further to the 1950s, when George Devol developed the first industrial robot—a two-ton device that autonomously transferred objects from one place to another with hydraulic actuators. Since that time, as sensors, electronics, and computer software have advanced, the capabilities of industrial robots have greatly expanded to include complex tasks such as welding, painting, assembly, packaging, palletizing, inspecting, and testing—all accomplished with speed, precision, and repeatability. 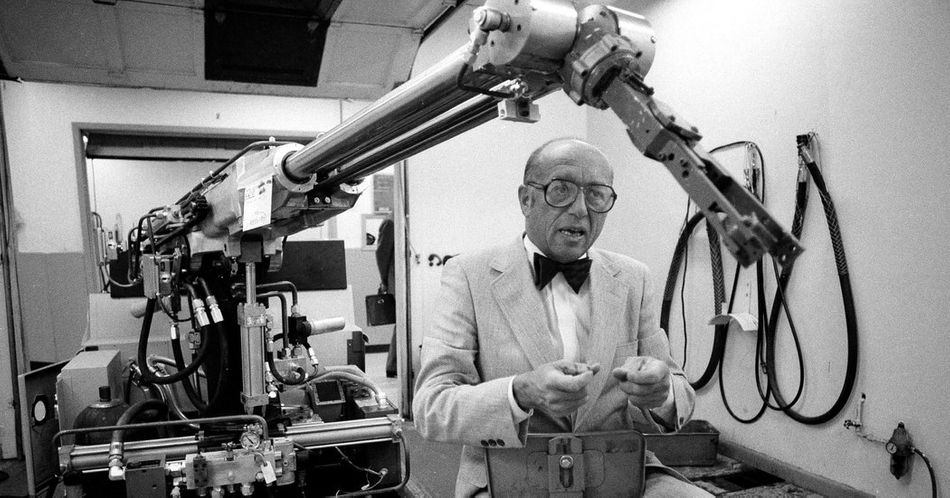 Robots were first used commercially on assembly lines in the early 1960s. Most featured hydraulic or pneumatic arms and were primarily used for heavy lifting. Although the devices were primitive, sensorless, and featured limited programmability, they proved to be an invaluable tool for increasing production in manufacturing facilities and set the stage for what would be a prolonged period of robotics development.

Throughout the late 1960s and early 1970s, as the need for automation of manpower-intensive tasks in manufacturing increased, the focus of industrial robotics shifted away from heavy lifting to materials handling and precision work. This gave birth to the development of smaller electric robots with advanced controls, microprocessors, miniaturized motors, gyros, and servos, which made them ideal for lighter assembly tasks, such as bolt and nut tightening.

By the late 1970s, the capabilities of robots expanded even further to include tasks such as material transferring, painting, and arc welding. They also began taking over dangerous tasks in manufacturing facilities. In steel mills, for instance, robots were used to move parts and materials in high-temperature environments that were inhospitable for humans. This significantly improved facility safety and drove increased workforce productivity by freeing up skilled labourers to direct their focus to more important manufacturing operations.

Robotic Technology in the 1980s: Laying the Foundation for the Future

The mid-1980s saw increased interest and excitement in robotics. In understanding robots as the “machines of the future,” engineers began pushing the frontier forward to support industrial development and achieve greater manufacturing competitiveness. It was during this period that the foundation of the present-day industrial robot was laid, as they began incorporating advanced sensors and rudimentary machine vision systems. 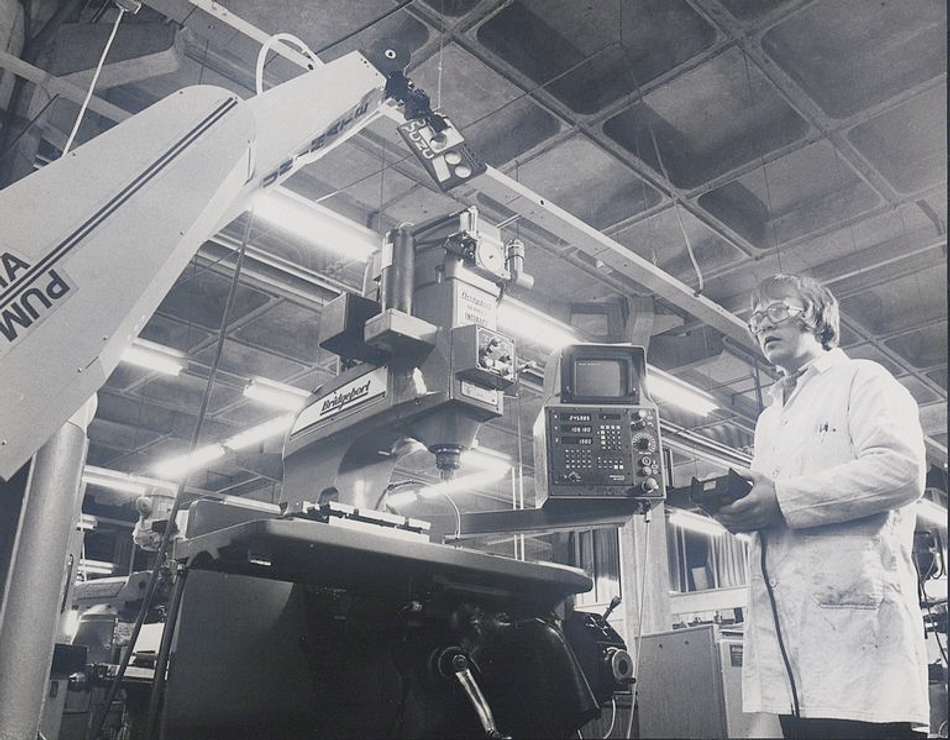 The emergence of these technologies, coupled with a substantial reduction in costs of computer hardware, like microprocessors, resulted in a steep change of advancement in industrial robotic capabilities. Using precision force sensors and lasers, industrial robots were given the ability to detect and follow manufacturing components along assembly lines. These lasers and sensors provided the robots with a human-like sense of sight and touch and revolutionized their interactions with the industrial environment. As a result, robots were transformed from simple mechanical devices that were programmed to perform repetitive tasks to more elaborate machines that possessed what many categorized as “limited intelligence.

Industrial Robots of Today and Tomorrow

Since the early 2000s, developments in industrial robotics have largely been driven by advancements in software. Emerging fields, such as machine learning (ML) and artificial intelligence (AI), are now pushing forward the frontier of what robots can do—giving them the ability to learn, improve, and make decisions without direction or guidance from humans.

Most industrial robots in use today are equipped with a multitude of advanced sensors that gather immense amounts of data. When integrated with advanced analytics and ML software, the robots can interpret this data and use it to adapt, alter mechanical motions, and better complete the task at hand. This quest to provide robots with “real intelligence” is now the primary focus of robotics engineers.

In the coming years, as industrial robots become smarter, they will be able to take on more complex tasks and execute them with an efficiency that far exceeds human capabilities. They will also be able to safely work alongside humans in the manufacturing environment. This is something that is already occurring today with the emergence of collaborative robots or cobots.

Cobots are a relatively new type of robot designed to safely operate in close proximity or even in direct contact with humans. They utilize advanced technology, including force-limited joints and computer vision to detect the presence of humans in their environment. Cobots are often much smaller and lighter than traditional industrial robots, easily moveable, and trainable to perform specific tasks. 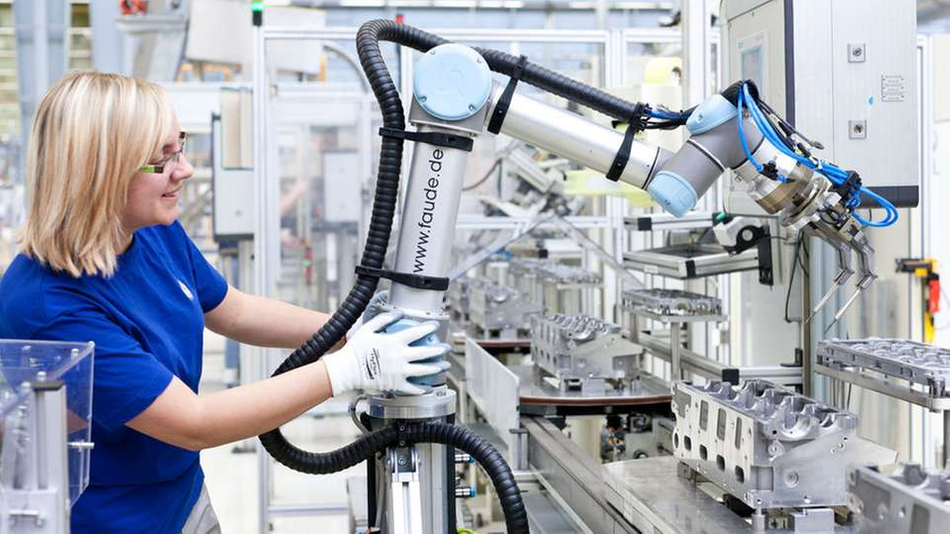 Early cobots were passive without their own power source. Human workers provide the force needed to move an object, while the robot-guided its trajectory and eliminated some of the physical strain. Cobots have since rapidly advanced to a point where they can lift and move objects with precision and gather and deliver information about their environment.

Together, humans and cobots offer a unique level of skill that neither can offer on their own, which results in manufacturing products far better and faster than would be if either were working without the other. The cobot market is valued at close to $1 billion—with an estimated 40,000 machines in operation across the globe, according to ABIresearch®.

The final and critically important step in industrial robots' ongoing history and development is what is at the end of the robotic arm. End of arm tooling has advanced from basic grippers capable of handling hard materials to soft robotic grippers embedded with sensors that allow the robot to adapt its grip according to the object's surface material and weight. The development of end of arm tooling plays a key role in the value a robot can bring its end-user and will contribute highly to the wide adoption of industrial robots to new industries. 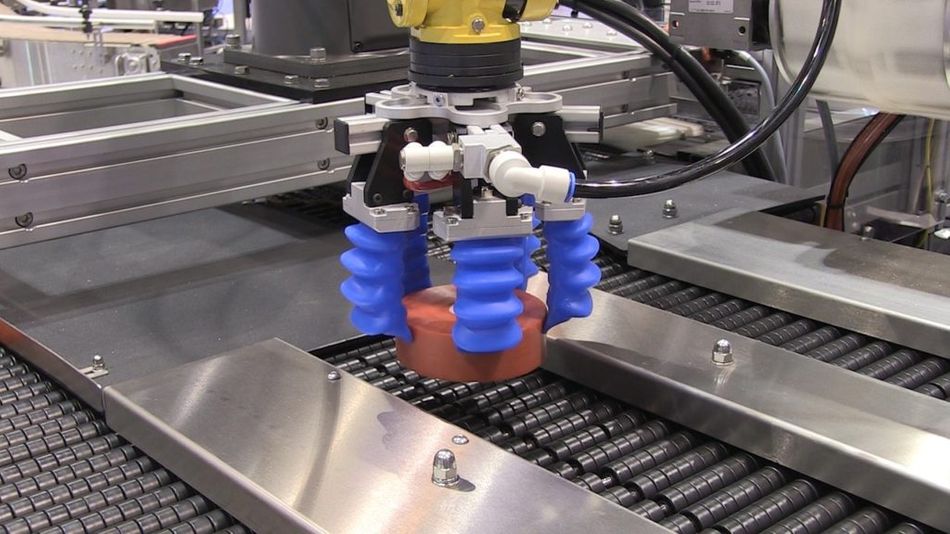 Industrial robots have come a long way from the hydraulic arms and bolt turners of the 1950s and 1960s. Today, these smart mechanical devices can work safely alongside humans to perform a wide array of complex tasks, such as painting, welding, complex product assembly, and even surgery. In the coming years, as automation continues to drive competition among manufacturers across the globe, the robotics market will continue to expand, and the role robots play to help drive efficiency and throughput within industrial environments will grow in importance.

This article was originally written by Alex Misiti for Mouser and substantially edited by the Wevolver team. It's the second article of a series exploring collaborative robots.