Graphene took the world by storm in the 00s. But the world is full of alternative 2D materials, and some of them may have the potential to revolutionize the electronics industry.

Several times during the interview, Steven G. Louie lifts up the paper on his table.

But he is not interested in the text as such. The paper is flat—just like the various materials in atom-thin layers that constitute the subject of his work as physics professor at the University of California, Berkeley.

This random A4 sheet is a convenient model for 2D materials. In Steven Louie’s hands it turns into graphene one minute, molybdenum sulphide the next—later it is stacked in layers with other materials, and along the way virtually exposed to various magnetic fields, temperatures and light conditions.

“Since the isolation of graphene in 2004, research into 2D materials has accelerated. Time and time again, they turn out to have properties which are distinctly different from those you would normally see in those materials,” says Steven Louie, who gave an Ørsted lecture in connection with his visit to DTU.

Scientific literature today details more than a thousand different 2D materials. Of these, graphene has received by far the greatest attention.

This is not only because graphene was the first 2D material to enter the playing field, but also because it possesses a number of unique properties. For example, graphene is a thousand times stronger than steel and conducts heat twice as well as copper.

You can also produce graphene with excellent electrical conductivity or graphene that is transparent.

“These are all extremely interesting properties. There is no doubt that graphene will be the subject of intense future research. Nevertheless, I believe that the time has come to adopt a broader focus. Especially so if you are interested in applications within electronics, because graphene simply lacks band gap,” explains Steven Louie about the property which determines the usefulness of a material in e.g. computers.

The decisive factor determining which of the three groups a material belongs to, is how easy it is to excite an electron in the material.

"Nature has many examples of layered materials. It is highly likely that many of them can be manufactured in 2D or almost-2D versions. "

The amount of energy required to excite an electron is called the band gap. Electrically conductive materials have no band gap—the electrons can travel freely.

The exact opposite situation exists within electrically insulating materials, where the band gap is so large that it would be disproportionately expensive to overcome in practice.

In the third group—semiconductors—the band gap is small. This means that you can excite the electrons by adding a small quantity of energy, originating from either heat or light. And unlike the fully conductive materials such as graphene, in semiconductors you can completely control when the electrons travel.

That is why semiconductor materials form the backbone of today’s computers.

“Graphene has many unique properties, but for applications in the quantum computers of the future, it would probably be more beneficial to use 2D materials with band gap,” Steven Louie establishes.

In collaboration with colleagues, he has been studying molybdenum sulphide, which does have band gap. 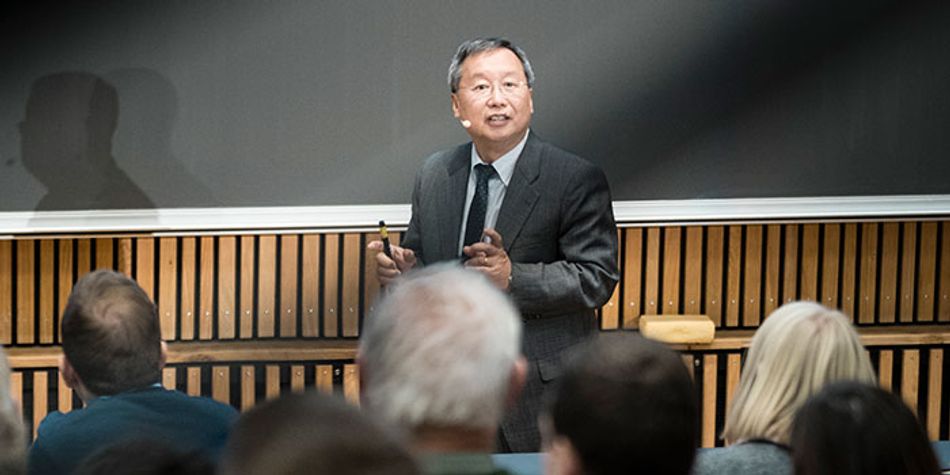 Even though Steven G. Louie’s work is basic research, he finds that practical application is never far away, given that materials are the focus of his research.

Like other 2D materials, 2D molybdenum sulphide possesses great strength in itself, but when stacked, the force keeping two layers together is weak. The layers are held together by the so-called van der Waals interactions, which are much weaker than chemical bonds.

By means of photoluminescence, the group demonstrated how the interaction between the various layers in the stack can be used to regulate the electronic band structure of molybdenum sulphide.

This makes it possible to tailor the material, so that a minimal addition of energy is sufficient to make the electrons travel in the material. In other words, the material could be perfect for use in a quantum computer.

“It’s exciting that you are so efficiently able to tune the electrical and optical properties of the system by changing the exact distance between two layers in the stack. The distance can be adjusted either during manufacture of the material or subsequently by applying an external pressure. The possibility of regulating the optical, mechanical and electrical properties of systems allows for new applications in appliances,” says Steven Louie.

Remember that we live in a 3D world!

Steven Louie is also considering how the small amount of energy required to initiate electron travel can best be supplied:

“We can use magnetic fields, temperature changes or light. It’s still too early to say which technique will be best suited for the purpose.”

Furthermore, the method must obviously be able to be built into an appliance.

“We design our systems in 2D, but we should bear in mind that we actually live in a 3D world!”

As a theoretical physicist, Steven Louie himself will not be the one producing the appliances, but he always tries to keep a watchful eye out for applications:

New 2D materials are developed constantly, and one particular type among them interests Steven Louie:

“Nature has many examples of layered materials. It is highly likely that many of them can be manufactured in 2D or almost-2D versions. In that case they would have the immense practical advantage that they are very stable. If they weren’t stable, they wouldn’t exist in nature!”

Many more 2D materials are now being subjected to thorough investigation, and Steven Louie has no doubt that a stream of surprising scientific discoveries await:

“It was recently demonstrated that electrons—which we know to have mass—in some 2D systems behave as if they were particles without mass, like photons. This is yet another example underlining the fact that the limitations which 2D materials constitute for the behaviour of electrons, cause phenomena that are quite different compared to those same materials in 3D. It’s really exciting to work in a field which, every few years, witnesses discoveries that expand our understanding of basic physics, while opening up a range of potential practical applications.”