Ankle joint kinematics and kinetics were obtained from a non-amputee professional dancer during various steps of the rumba. The data were used to develop a biologically inspired control system for the bionic ankle-foot prosthesis.

The intent of this work was to extend the mobility of individuals with below-knee amputations to permit expressive activities that have traditionally remained difficult and unintuitive, reducing the gap in motor abilities between persons with and without leg amputation.

Additionally the spherical mount modification permitted a space within the socket where the battery was relocated. Relocating the battery provided a more anthropomorphic shape for the prosthesis and socket, allowing the experimental participant with leg amputation to perform cross-step dance maneuvers without leg-to-leg interference.

A commercially available bionic ankle prosthesis (BiOM Inc, Medford, MA) was modified for use in the study. The bionic device was chosen for its ability to provide joint position, impedance and torque control to the wearer, as well as the ability to implement novel control programs on the computers within the device.

Relocating the battery provided a more anthropomorphic shape for the prosthesis and socket, allowing the experimental participant with leg amputation to perform cross-step dance maneuvers without leg-to-leg interference. The modifications of the prosthesis reduced the total mass by 100 g.

Rumba Biomechanics of a Non-Amputee

Biomechanical data were obtained from a 39 year old, female professional dancer (height: 1.75 m, mass: 54.5 kg) in the gait lab within the Biomechatronics group at the MIT Media Lab. The study was approved by the MIT Committee On the Use of Humans as Experimental Subjects and written informed consent was obtained.

Five trials were obtained of four steps of the rumba, with each trial lasting approximately 5–15 seconds. The specific steps were chosen because they span a broad range of the rumba dance. The four steps included in the study are known as basic, crossovers double-rock, crossovers with underarm turn, and open break. The participant was instructed to attempt to keep one foot on the force platforms within the gait lab, if possible, to maximize the data usable for the analysis.

The raw data were processed in SIMM (Musculographics Inc., Evanston, IL) to obtain joint trajectory and torque profiles. Data were segmented to only include regions where one foot was acting on a single force platform. The relationship between ankle torque and ankle angle was explored for the development of the controller, where negative angles denoted plantar flexion.

Development of a Biologically-accurate Control System

The goal of the control system was to provide a biologically-accurate relationship between ankle torque and ankle angle during the rumba. The ankle torque for each step was investigated as a function of ankle angle while the angular velocity was greater than 30 degrees/s, chosen to eliminate regions of the dance steps where the ankle behavior was static.

Linear regression was used to determine the mean relationship between torque and angle for each dance step. Subsequently, the slope and intercept were averaged across dance steps to obtain the mean linear torque-angle relationship that described the rumba dance steps.

A linear spring-damper model of ankle mechanical characteristics was chosen for the desired behavior implemented in the control system, a model that has previously been shown to successfully characterize other human ankle behaviors. The slope of the mean linear regression value corresponds to the stiffness and the equilibrium angle was determined by the x-intercept of the regression. In other words, the control system was defined by where τ corresponds to ankle torque, k is ankle stiffness, θ is ankle angle, θ0 is equilibrium angle, b is the damping coefficient and is ankle angular velocity measured by the bionic ankle. 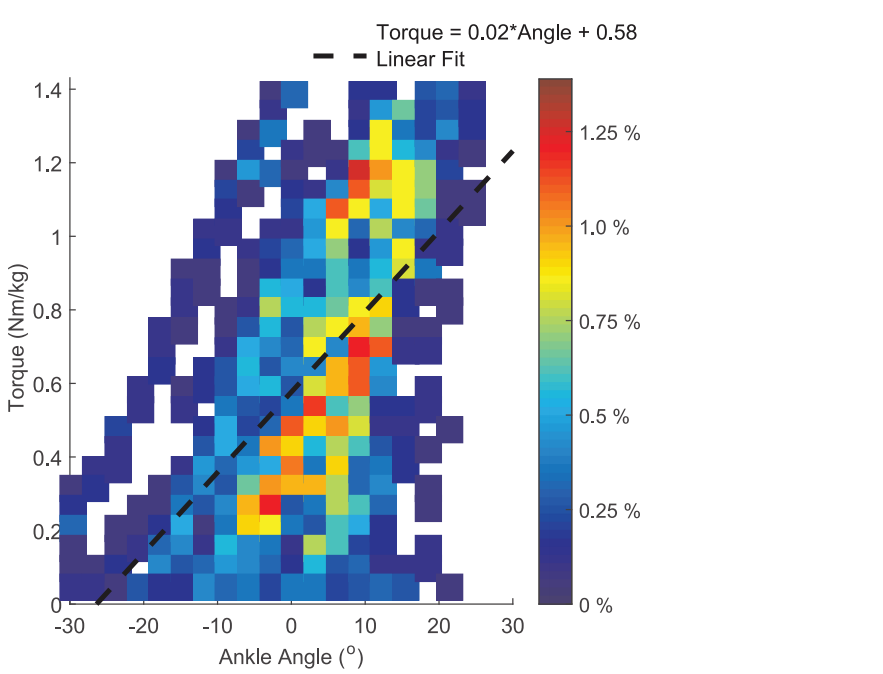 **Figure 2. **Non-amputee ankle torque plotted against ankle angle for the under arm dance step. The color of the region indicates the percentage of the dance step data within the region; the darkest red regions had the highest concentration of data. The line of best fit is shown, which was used as the basis for the biologically inspired control system.

The damping value was tuned to the preference of the amputee wearer. Following development, the control system was downloaded to the control computer within the bionic dance prosthesis.

Provides detailed description of the project; its goal, requirements, materials and tests. Also includes a comparison between bionic and conventional P\prosthesis.

A (Charm)ing Approach For Carbon Offsetting

The robot arm, which is inspired by a woodpecker's tongue, can be extended many times its length, bent into an S-shape, and stored in a small space, like Doctor Octopus from the Spider-Man series.