Researchers at the Wyss Institute at Harvard University, in collaboration with healthcare, research, and industrial partners, have designed a new, fully injection-molded nasopharyngeal swab that can be manufactured quickly and inexpensively at high volume to help address the nationwide and international shortage of swabs for COVID-19 testing and research. The swabs are moving into human trials at SUNY Downstate Medical Center in New York and Translational Genomics Research Institute (TGen), an affiliate of City of Hope in Arizona, which should be completed by the end of next week, and are in preclinical evaluation at six additional hospitals. Data from the two trials will be used to inform larger trials with COVID-19 patients, and California-based medical device manufacturer IPB, Inc. has been working around the clock to ramp up production of the new swabs to reach 200,000 per day by May 15. 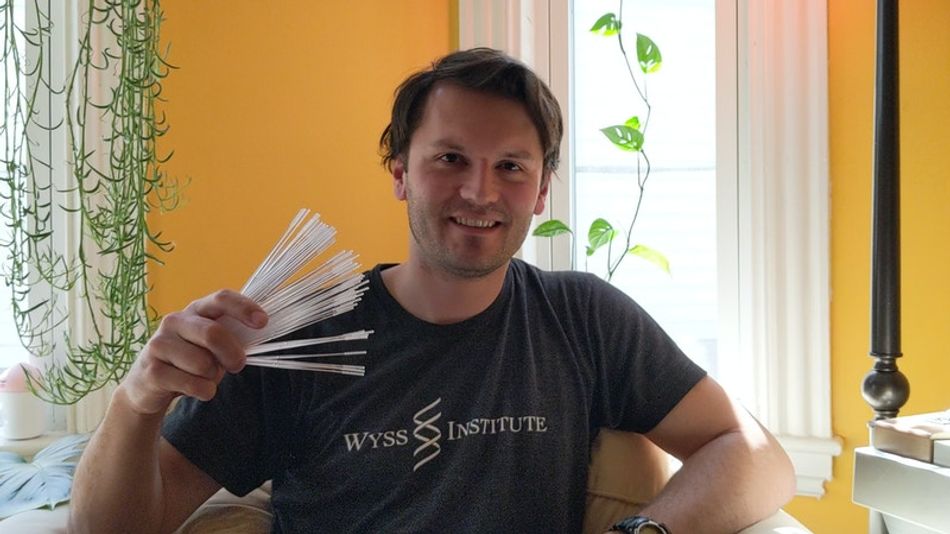 Senior Staff Engineer Richard Novak, Ph.D., one of the Wyss team leaders of the swab project, holds a handful of the prototype swabs. Credit: Wyss Institute at Harvard University

“Experts have recently estimated that the United States needs to more than triple the number of daily COVID-19 tests in order for the country to be safely reopened by mid-May, but the current swabs are complicated to make, and producers just don’t have the ability to increase production to that level in such a short period of time,” said Richard Novak, Ph.D., a Senior Staff Engineer at the Wyss Institute who has been leading the multi-institutional effort to develop a fully injection-molded swab, working with the Wyss Institute’s Founding Director Donald Ingber, M.D., Ph.D. “These new swabs can help meet the critical need for collecting samples, both to diagnose patients and to study the virus itself so that treatments and a vaccine can be found sooner,” said Ingber.

The project began just over a month ago when clinician-researchers at Beth Israel Deaconess Medical Center (BIDMC) reached out to Ingber asking for help to solve the hospital’s swab shortage as the COVID-19 pandemic was blossoming. Ingber, Novak, and a team of Wyss researchers joined the multi-disciplinary effort, quickly realizing that not only could they design a swab replacement, the Wyss Institute’s unique position at the intersection of academia and industry meant that it could bring together clinicians who needed swabs, researchers who were developing them, and manufacturers who could rapidly produce them at low cost, streamlining the process to get the swabs into the hands of doctors and nurses as quickly as possible.

“The Wyss Institute site on the Longwood campus is physically connected to Beth Israel Deaconess Medical Center, so it makes sense that they would think of the Wyss Institute as an innovation partner with the capability to solve this type of open-ended problem,” said Ingber, who is also the the Judah Folkman Professor of Vascular Biology at Harvard Medical School and Boston Children’s Hospital, and Professor of Bioengineering at the Harvard John A. Paulson School of Engineering and Applied Sciences (SEAS). “We were in the midst of figuring out how to shift our staff to work remotely while also starting new COVID-19-related research efforts at the Institute; but the shortage of swabs is such a pressing problem that the decision to help solve it was a no-brainer.”

Designing and delivering a better swab

The nasopharyngeal swabs that have been used in hospitals for more than 50 years consist of two pieces: an injection-molded plastic handle and an absorptive tip made of a soft material such as cotton, polyester, or flocked nylon. Each swab is manufactured in a multi-step process, then assembled, sterilized, and packaged, all of which requires significant time and expense. As part of the overall effort to create a more streamlined alternative, other teams have leveraged 3D printing to meet this challenge, which has led to some useful short-term solutions.  However, 3D printing is currently costly and can only be done at scale by a limited number of suppliers. The Wyss team set out to create a new design that could be manufactured using injection molding rather than 3D printing, because injection molding is faster, less expensive, and is routinely used by a broad range of experienced medical device manufacturers worldwide.

“We’ve essentially had to build a medical device company from scratch because we’re trying to create a new product, demonstrate that it works, and ship it to customers who need it quickly, and to do that, you need to figure out production, manufacturing, packaging, quality control, clinical trials, etc.,” said Novak. In addition to Novak and Ingber, the Wyss team includes members from across the Institute who have contributed their diverse skills to address different facets of the project, including Dave Perry, Ramsés Martínez, Isabel Chico-Calero, Adama Sesay, Pawan Jolly, and Jenny Tam.

The new nasopharyngeal swabs feature a flexible, honey dipper-like design that can be injection-molded in one step, making them cheaper and easier to manufacture than 3D-printed swabs. Credit: Wyss Institute at Harvard University

In mid-March, Ramy Arnaout, M.D., Ph.D. and James Kirby, M.D., who lead the Clinical Microbiology Laboratory at the BIDMC, began collaborating with the Wyss team, who developed and tested new swab designs that they 3D printed and showed each other via video calls and email, as social distancing measures prevented them from physically working in the same space. Over repeated trials, they eventually settled on a design with a flexible, honey-dipper-like tip that could be injection-molded. The Wyss team has now sent prototype injection-molded swabs produced by Proto Labs to eight hospitals and health centers for preclinical testing, in which clinicians are evaluating the swabs’ performance on a variety of fronts including their comfort and ease of use, as well as their ability to collect a large enough sample with detectable amounts of viral RNA.

This week, the swabs are being tested in human subjects who will receive a normal swab in one nostril and a prototype of the Wyss-designed swab in the other. If the new swabs can collect a sample that contains detectable genetic information while being as easy-to-use and comfortable as the existing swabs, IPB will ramp up production of the final injection-molded design, which will be used in future clinical trials and, the team hopes, become widely adopted by the medical community in testing patients for COVID-19.

“The speed with which all this is happening is incredible – it is always a challenge to efficiently design a new product even within a standard timeframe, and the pandemic has brought challenges that need to be resolved in weeks, even days, which has reminded us how well we can adapt to unexpected situations,” said Martínez, a Research Assistant who has been working on the design and iteration of the Wyss’ prototype swabs. “Besides addressing the immediate need for swabs, we think that this new design can have sustained use beyond the pandemic because its manufacturing process is cheaper and more streamlined, making it viable in economies outside the United States and hopefully preventing such a shortage from happening in the future.” 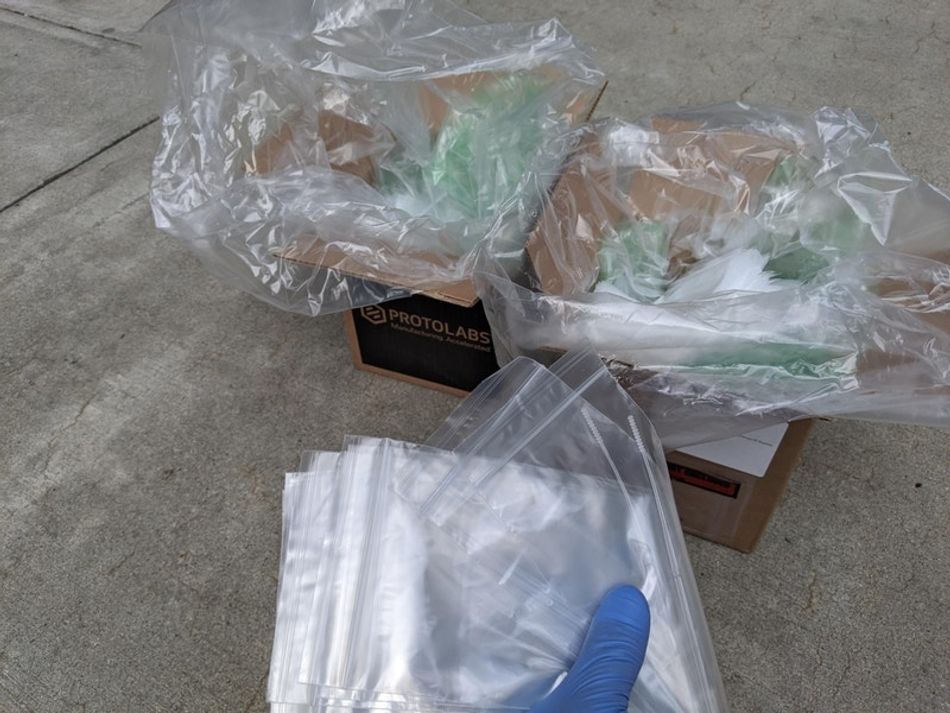 In addition to the design of the swabs themselves, the Wyss team is working on packaging, sterilization, and delivery needs to ensure they can be made available to hospitals and testing centers around the world. Credit: Wyss Institute at Harvard University

“I’ve been really impressed by how collaboratively all these hospitals and companies are working with each other – it shows that the people involved are genuinely invested in developing solutions to save lives during this crisis, in any way they can,” said Perry, a Staff Engineer at the Wyss Institute who is working on packaging and sterilization solutions for the swabs.

Reaching out and making connections across miles and time zones is what has allowed this week’s trials to take place at SUNY Downstate in New York City and TGen’s Pathogen and Microbiome Division, TGen North, in Arizona. TGen North Clinical Laboratory is testing the new Wyss swabs side-by-side against existing swabs on volunteers from its research labs, and is also processing COVID-19 tests for several counties and tribal nations in northern Arizona.

“We’ve noticed that the biggest bottleneck in clinicians sending us samples to test is that the swabs they use are in short supply, and are backordered at all the major manufacturers,” said Tim McDaniel, Ph.D., the Senior Vice President of Emerging Opportunities at TGen. “Having additional manufacturers with the ability to produce swabs on a massive scale will be a huge benefit to medical groups like us around the country, and we are proud to be helping evaluate the Wyss swabs to further that effort.”

At SUNY Downstate, the swabs are being used alongside existing swabs to collect samples from healthcare workers in the emergency, intensive care, and inpatient departments as part of a small trial to determine if people who are infected with the coronavirus but aren’t showing symptoms can still transmit the virus to others. The hospital’s Department of Pathology is also working with the Wyss Institute on plans for a larger clinical trial to evaluate the swabs’ performance based on data from the ongoing trial.

“One of the silver linings of this pandemic is that it has really galvanized institutions to reach out to each other and work on solving shared problems together,” said Noriyuki Murakami, M.D., a Clinical Assistant Professor in Downstate’s Department of Medicine and an academic hospitalist overseeing residents at the University Hospital of Brooklyn. “This is the first time we’ve collaborated with the Wyss Institute, and it’s been a great development for SUNY Downstate – we hope this trend continues with other institutions as well.”

Ingber added, “the solution to this crisis will come from the responses of scientists, engineers, and clinicians working individually and collaboratively around the world. We at the Wyss Institute are proud to be part of the solution; this is precisely why the Institute was created in the first place.”

Tackling the virus through creativity

ETH Zurich has been in lockdown for more than two weeks now. Although many projects have been put on hold, research relevant to the coronavirus has gathered speed. Many projects and initiatives are currently underway that are intended to help bring the pandemic under control.

The kits help researchers understand where the virus came from and how it operates.