Researchers at Columbia Engineering and the National Institute of Standards and Technology (NIST) have discovered a new method to improve the toughness of materials that could lead to stronger versions of body armor, bulletproof glass, and other ballistic equipment.

In a study published December 13 in Soft Matter, the team produced films composed of nanometer-scale ceramic particles decorated with polymer strands (resembling fuzzy orbs) and made them targets in miniature impact tests that showed off the material’s enhanced toughness. Further tests unveiled a unique property not shared by typical polymer-based materials that allowed the films to dissipate energy from impacts rapidly.

“Because this material doesn't follow traditional concepts of toughening that you see in classical polymers, it opens up new ways to design materials for impact mitigation,” said NIST materials research engineer Edwin Chan, a co-author of the study.

The polymers that constitute most of the high-impact plastics today consist of linear chains of repeating synthetic molecules that either physically intertwine or form chemical bonds with each other, forming a highly entangled network. The same principle applies to most polymer composites, which are often strengthened or toughened by having some nonpolymer material mixed in. The films in the new study fall into this category but feature a unique design.

“Mixing together plastics with some solid particles is like trying to mix oil and water. They want to separate,” said Sanat Kumar, a Columbia University professor of chemical engineering and co-author of the study. “The realization we’ve made in my group is: One way to fix that is to chemically tether the plastics to the particles. It’s like they hate each other but they can’t get away.”

The films are made of tiny glass spheres, called silica nanoparticles, each covered with chains of a polymer known as polymethacrylate (PMA). To produce these polymer-grafted nanoparticles (PGNs), Kumar’s lab grew PMA chains on the curved surface of the nanoparticles, rendering one end of each chain stationary.

Shorter, or lower molecular mass, chains on the PGNs are constrained by neighboring chains. The lack of motion means they do not interact much. But higher molecular mass polymers, which fan out farther from the spherical nanoparticles, have more elbow room to move, until they become entangled with other chains. Between these two lengths, there is an intermediate molecular mass where polymers are free to move but are also not long enough to knot up.

This phenomenon was useful for the material’s initial purpose, which was permitting gases to move through it quickly. But Chan and others at NIST sought to find out how this unique property would affect toughness. With the help of Kumar’s lab, the researchers tested samples of varying molecular masses.

“We grew polymeric hair off of the particles from a really short, brush-cut regime to a very long, hippie regime,” said NIST materials research engineer and co-author Chris Soles. “The brush-cut nanoparticles don’t entangle and can pack together, but as the polymers get longer, the distance between nanoparticles expands and the chains between particles start to entangle and form a network.”

At NIST, the researchers opened fire on the PGN composite films of different molecular masses with a technique known as Laser-Induced Projectile Impact Testing, or LIPIT. These high-velocity impact tests involved propelling 10-micrometer-wide (about four-thousandths of an inch) spherical projectiles toward the targets at velocities of nearly 1 kilometer per second (more than 2,200 miles per hour) with a laser.

They determined the velocity of the projectile in transit and on impact through images captured with a camera and strobe light flashing every 100 nanoseconds (billionths of a second). From there, the team had what it needed to calculate the energy it took to tear through the film, a quantity directly tied to toughness.

The authors of the study found that the PGN composite films were generally tougher than solely PMA. But what was perhaps more interesting was that intermediate molecular mass yielded the toughest film. 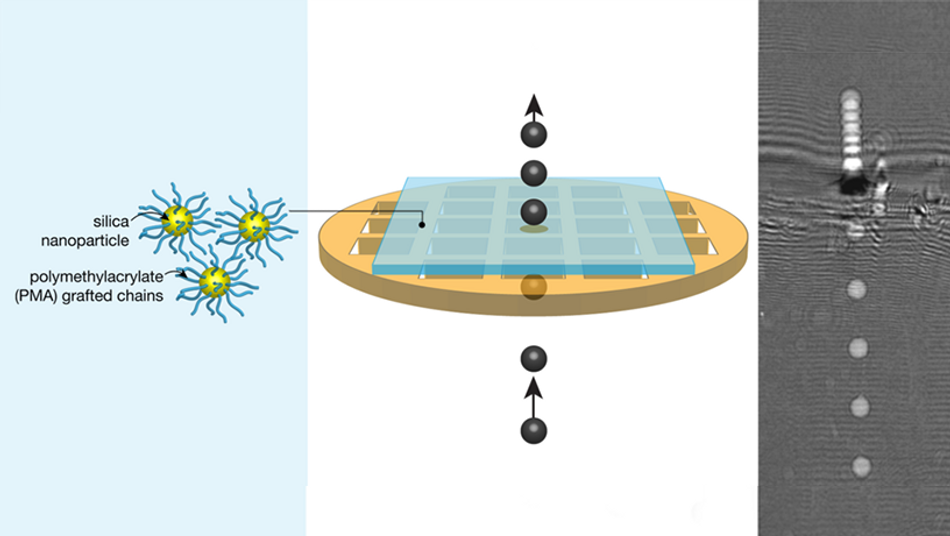 Researchers at Columbia Engineering and NIST used lasers to evaluate the toughness of silica nanoparticle films.

In purely polymeric materials, longer chains tend to create a greater number of tangles. And more tangles translate to greater toughness, up to the point where the material is completely tied up. However, the LIPIT tests revealed that the films could defy traditional polymer behavior. The toughest samples had chains far shorter than the length for full entanglement, meaning that tangles were not the only factor driving toughness.

Soles and his colleagues suspected that the reason was the decreased packing between the chains at the intermediate molecular masses, which could have created a situation where polymers could wriggle about more freely and create friction with neighboring chains—a potential avenue for dissipating energy from a high impact.

Seeking to pin down the underlying source of the toughness and test their hypothesis, the team members used equipment at the NIST Center for Neutron Research to assess the motion of the polymers.

These tests confirmed that the intermediate molecular mass chains attached to the nanoparticles displayed an ability to move and then reach a relaxed state in just a few picoseconds (trillionths of a second). These enhanced movements of the intermediate chains dissipated energy more readily than either the short (no tangles) or long (highly entangled) PMA chains. This finding backed the team’s intuition, especially when taken along with the LIPIT tests.

The results of this study hint at the existence of a sweet spot with respect to the length of polymers fixed to the curved surface of particles that could boost material toughness. The finding may not be limited to PMA either.

“Based on this kind of platform, the grafted nanoparticle concept, you can start experimenting with more classic high-impact polymers such as the polycarbonates used in bulletproof windows,” Chan said. “There's just so much to explore. We're only just scratching the surface of these materials.”

Ever since its invention in the 1980s, Atomic Force Microscopy has been an enabling technology for imaging and conducting a deep analysis of samples. In this article, we explain the most important things you need to know about it.

Breakthrough in the search for graphene-based electronics

A team of researchers from Denmark has solved one of the biggest challenges in making effective nanoelectronics based on graphene. The new results have just been published in Nature Nanotechnology.