If we’re ever going to have robots in every home and office, they’re going to have to touch/move/carry things, some of which are going to be delicate/heavy/awkward. That’s a challenge. Our handy human arms and hands have had a bazillion years to evolve and are available as built-in components (no extra charge). Robots don’t have it so easy.

For personal robots to be successful, hand-like graspers are a must and have to be affordable. In all likelihood they can’t add more than a few hundred dollars to the cost of a robot. However, making a decent working “hand” that can handle a range of objects for a price of a few hundred dollars is currently impossible. Or is it?

Italian researchers at the University of Pisa and the Italian Institute of Technology have produced the SoftHand 2, a notable advance in the quest for an affordable robot hand. Their breakthrough discovery is that it isn’t necessary to have separate cables (and motors) for each “finger” to achieve a reasonable level of dexterity in a hand overall. In the SoftHand 2, they very cleverly threaded just two cables across all five fingers, using a series of pulleys. This was enough to create significant strength and enable a variety of hand positions including grasping, poking, and pinching.

On the cost side, because there were only two cables, only two motors were needed. This is major progress compared to prior robotic hand offerings, which may use 10x as many motors, at a correspondingly higher level of cost. It’s hard to guess at a price point for the SoftHand 2 (or 3 or 4), but this type of solution looks promising as a possible way forward for robot hand affordability, while not sacrificing dexterity.

There are other groups making advances in robotic hands, but they’re confined to either hugely expensive projects or academic ones — years from viable commercialization. MIT’s Computer Science & Artificial Intelligence Lab is recently focusing on “soft robotics”; it’s easy to see why, given the promise shown in this Youtube video. And UC Berkeley’s AUTOLAB is exploring deep neural network-driven grasping with their DexNet 2.0 technology. 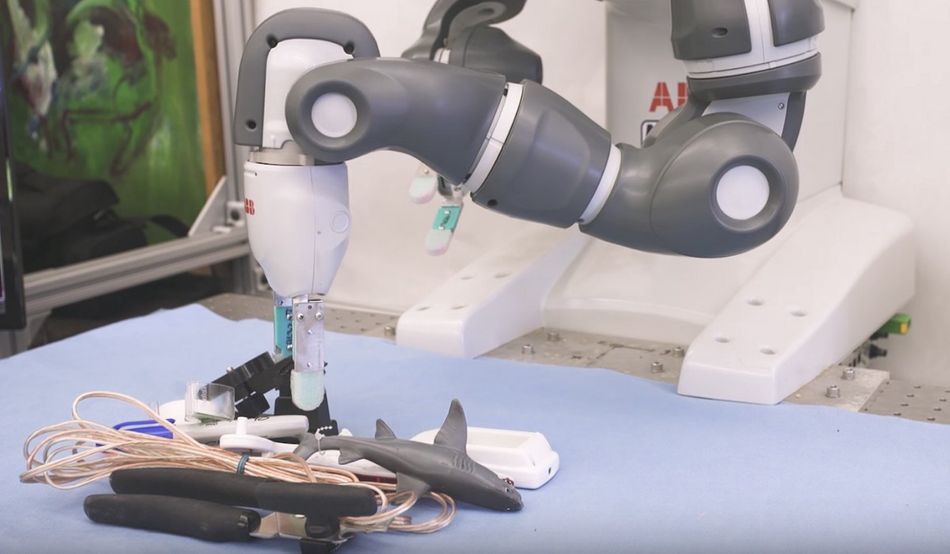 On the most capable but also highly expensive end of things, I recently met Johnny Matheny, a cancer amputee who has the world’s most sophisticated arm and hand from the U.S. Department of Defense… at a cost of $120M. 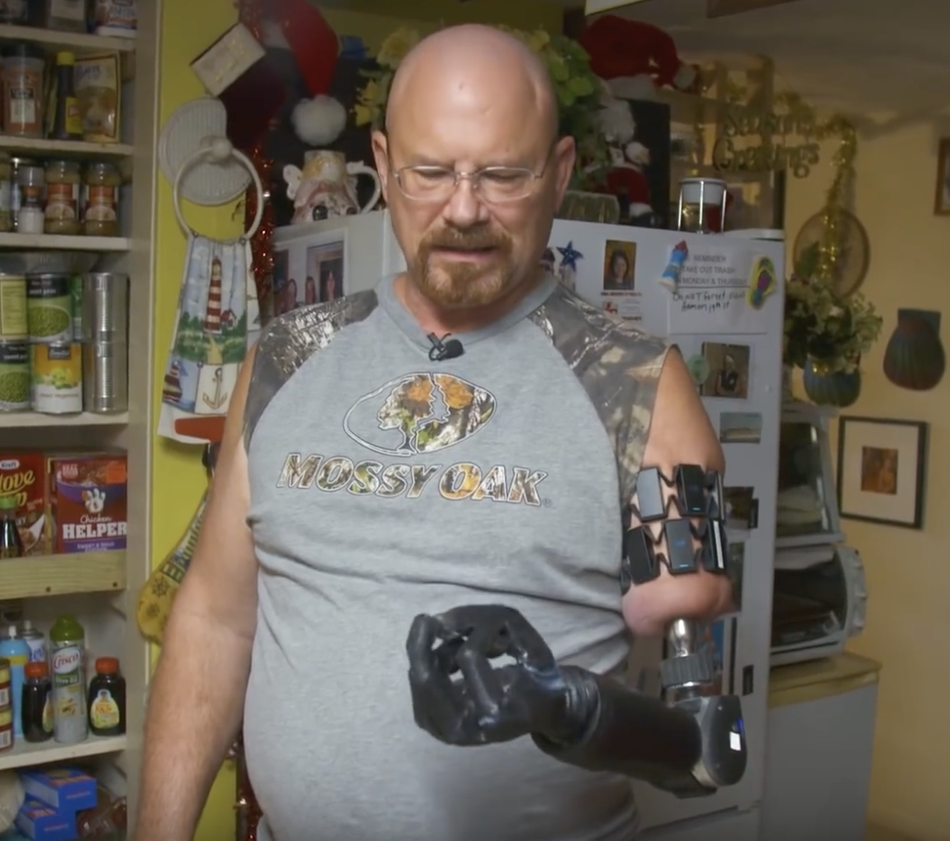 Johnny Matheny gets to use this arm for a year, but no swimming allowed. [Image credit: Quartz]

As an added constraint, hands must be of a size and weight appropriate to the robots using them. Most current general-use robots are relatively small and lightweight, so they can be easy for humans to live and work with. This implies that robot hands must also be relatively diminutive, with power draws proportionate to the robot overall, and not so heavy that they cause smaller robots to topple over with each reach for a cookie.

All of these constraints — from price to size — will keep leading designers to creative solutions like SoftHand 2. Small hands with a minimal number of motors are the likely path forward for the industry as a whole.

This is not to say that budding roboticists can’t and don’t hack together pseudo-hands of their own. It’s not super challenging to 3D print your own arm attachments for two-finger pincers, for example. And a quick Google for “robot grippers” will show the variety of off-the-shelf options available. 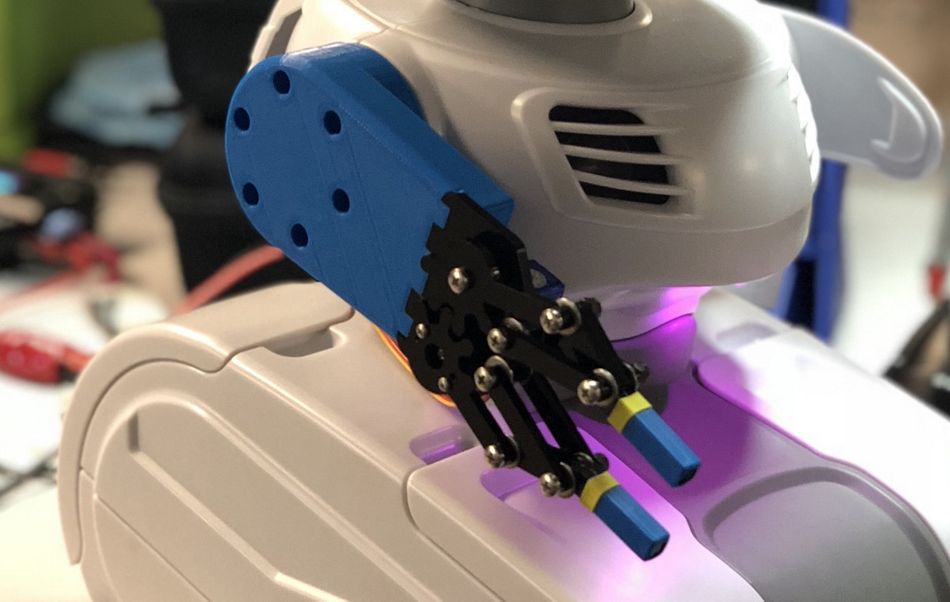 Giving Misty II custom arms is something of a hobby around our offices.

While grippers are no match for hands, for the time being handless robots still provide useful value. They can perform helpful home and office tasks that require autonomous movement, “seeing,” “hearing,” and “speaking.” Such tasks range from instrumentation (automatically observing indoor temperature, WiFi signal variations, x-rays into walls, etc. ) to telepresence to playing catch-the-laser with the dog.

But do a little digging into the really high-value tasks we humans want our robots to do and one quickly concludes that hands are a requirement. Doors need to be open-able; objects need to be pick-up-able and movable; and, at their most advanced, beds need to be made and toilets cleaned.

So, while there are many possible tasks for handless robots, that task range may be fully explored within, say, five years or so. During that time it’s vital for the young personal robot industry to enable hands. Robots that eventually cross the chasm into more than 50% of all offices and homes must have arms (and long-lasting power sources, and nearly infinite language abilities, and…).

Today that chasm is a gulf the size of the Grand Canyon but, as always, our bet is on the ingenuity of the robotics community to develop the “winning hand.”

Visionary leader with passion and skill in building startup teams who perform in the Top 10th percentile. Currently the Head of Misty Robotics, Inc. Based in Boulder, CO, we are building the robot for everyone. Misty Robotics’ vision is to put a personal robot in every home and office. These robo... learn more

ITMO University experts are creating technological assistants for chemical laboratories that will be able to take over all routine work with no human involvement needed. Right now, the first prototypes are already performing the simplest manipulations.

ITMO Students Develop New Manipulator Arm That Can Be Applied Everywhere: From Catering to Chemistry Labs

ITMO University students developed a compact manipulator arm using polymers, which helped significantly bring down its production costs. At the same time, the new device is just as secure and precise as its existing analogs.