Two men lift the 30-kilogram high-tech machine and lower it into the dark shaft using a rope. We put on reflective overalls, trade our shoes for thigh-high rubber boots and attach them firmly to our outfits. Then comes a helmet, a flashlight and disposable gloves for each of us. Fully kitted out, we begin our descent, following the steps down the wall of the shaft one by one until we reach Zurich’s sewerage system, four metres below the surface.

On this warm autumn day a team of researchers is performing tests underground. Their aim is to determine whether ANYmal – a robot jointly developed by Robotic Systems Lab and ANYbotics, an ETH spin-off – could one day be deployed in sewerage systems. It might be used, for instance, to help the City of Zurich employees who regularly have to walk or crawl through the some 100 kilometres of accessible shafts and drains underneath the city and whose job it is to check the walls and floors for damage. This work not only poses a health risk, but is also potentially lethal, given that the drains can fill up with water very quickly without warning. Another advantage of robots in such an environment is that they could operate in narrow sewers that cannot be accessed with the technology in use today.

The researchers place the robot upright at the bottom of the shaft. It is about 50 cm tall and has four articulated legs as well as something resembling a head that consists of a camera and various sensors. 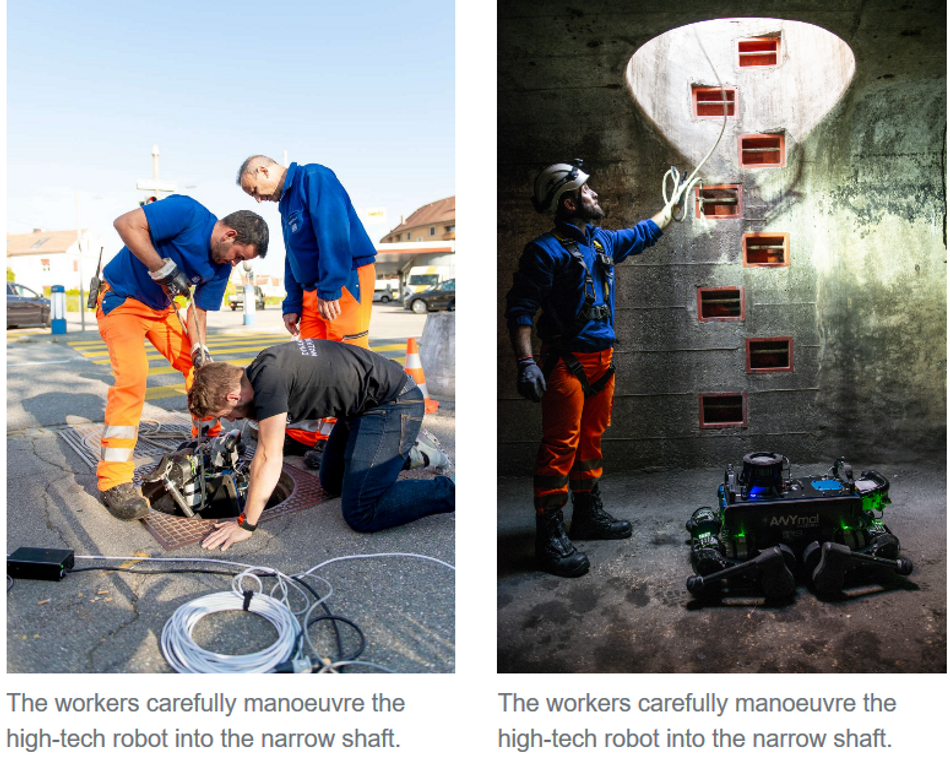 Peter Fankhauser, co-founder of the ETH spin-off that is commercialising ANYmal, radios his colleagues on the surface, who are responsible for coordinating the test and sending commands to the robot. Fankhauser then twiddles with a joystick and the robot plods forward. As this is the first test in unknown terrain, he takes partial control of the robot even though it is capable of moving autonomously. “It’s a precautionary measure,” says Fankhauser, “Just because something works in the lab doesn’t always mean it will in the real world.” After all, the conditions underground are not what the robot is used to: the chamber is wet and slippery, with lower temperatures and higher humidity than in the lab. What’s more, it’s very, very dark.

“It’s hard to distinguish much down here,” says Fankhauser, almost with a hint of resignation in his voice, as the robot moves at a slow pace through the roughly three-metre-high and five-metre-wide tunnel. The robot emits a uniform electromechanical sound – a kind of rhythmic whirring – that blends with the sound of rushing water emanating from the main sewer nearby. We are in quite a large overflow sewer with only a trickle of water in it. Given that the robot is on its maiden test run four metres below ground ­level, the researchers have taken the precaution of avoiding large volumes of water.

Finding its way in the dark

The goal of the three-year research project entitled THING (sub-Terranean Haptic InvestiGator) is to design robots that can move about on their own and are better able to identify their surroundings. Robots generally use 3D cameras and laser sensors for orientation. But such devices can malfunction in adverse conditions – such as when the ground surface is wet or the air full of dust. That’s why the researchers consider enhanced haptic perception – orientation by touch – to be a possible solution. The project has brought together ETH researchers with colleagues from universities in Edinburgh, Pisa, Oxford and Poznań. 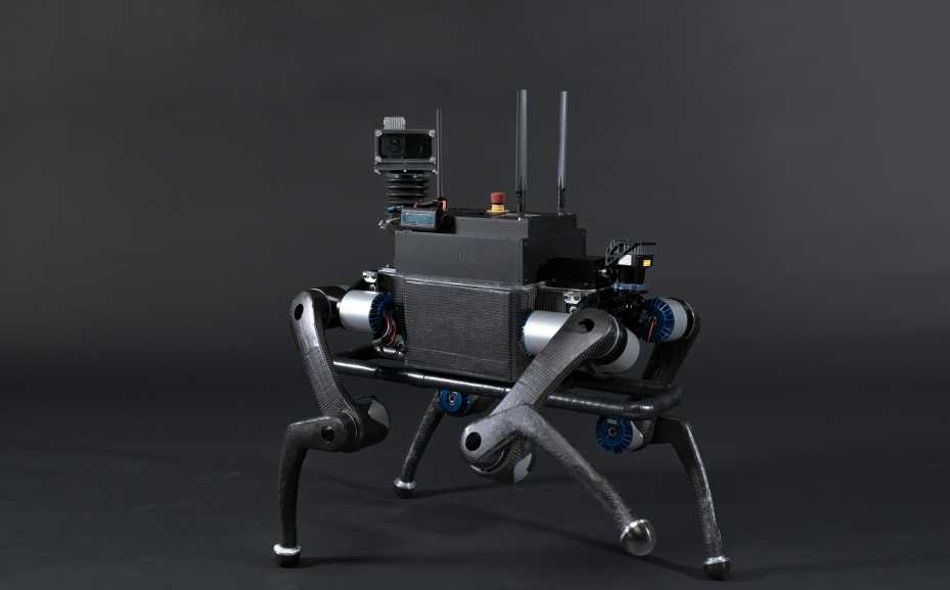 All these institutions are experimenting with ANYmal robots, and the project participants from the various locations meet up on a regular basis. In addition to the tests in the sewerage system, next year the researchers will deploy the robot in a Polish copper mine. That will determine whether it can function in an entirely different microclimate, one characterised by hot, dusty air and gravel surfaces. ETH is represented in the project by the Laboratory for Robotic Systems led by Professor Marco Hutter, who has been conducting research into legged robots for many years. He received support from ETH soon after embarking on this research in the form of an ESOP scholarship and a Pioneer fellowship.

One of the key questions on this first day of testing is whether the robot can find its way around at all in the darkness of the sewerage system. Initially, two helpers with big LED lamps illuminate the surroundings so that we can clearly see what’s going on. Then, Fankhauser asks the helpers to turn off the lamps and radios his colleagues on the surface to tell the robot to use its own lights. The robot’s sense of touch isn’t the only thing that helps it find its way in the dark, as Hutter explains: “The robot uses laser sensors and cameras to scan its surroundings. By identifying irregularities in the surface of the concrete, it can determine where it is at any given moment.”

All that can be seen in the darkness now are the small round LEDs in the robot’s “head”. The atmosphere is other-worldly: the darkness, the sound of rushing water, the electromechanical whirring, the robot’s LED eyes. Then someone breaks the eerie silence ­momentarily with a droll comment: “Its eyes are a bit like a Rottweiler.” 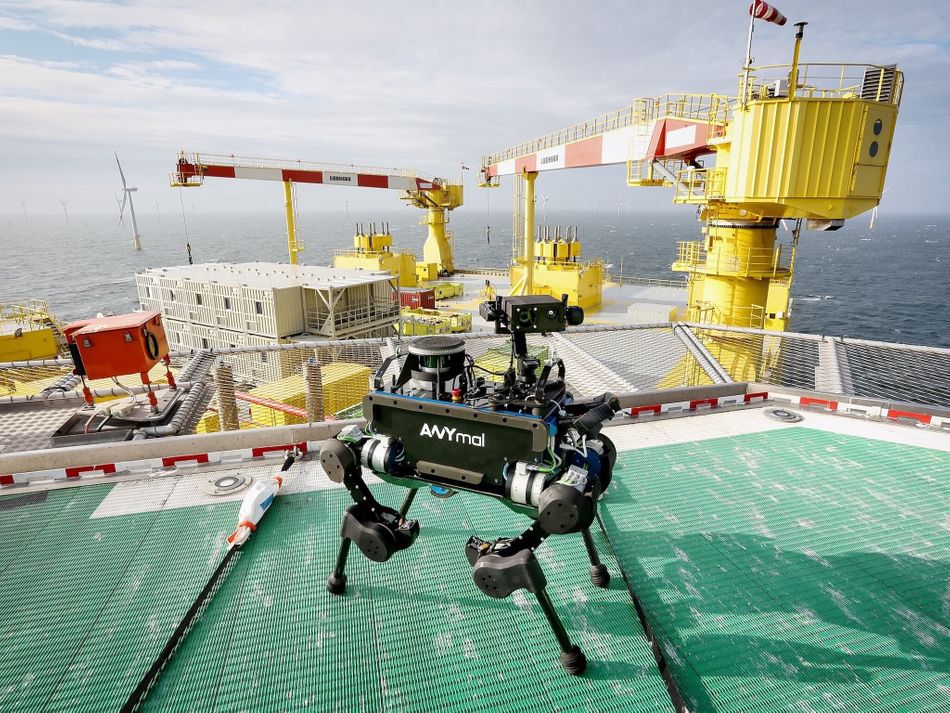 Researchers at ETH have been working on quadrupedal robots since 2009. The first ANYmal prototype was completed in 2015 and, one year later, ETH established the spin-off ANYbotics. The fledgling company’s mission is to make robots deployable in all types of terrain so that they can be used in a wide range of practical applications. The company’s slogan is “Let Robots Go Anywhere”. On-site tests are carried out two or three times a month. For instance, Fankhauser and some members of his team recently headed to an offshore platform in the middle of the North Sea. The hope is that robots could one day perform inspections on such platforms. On its pilot run at least, ANYmal autonomously completed several inspection routes with flying colours.

After almost ten years of research, there’s a lot ANYmal can do. It can not only walk autonomously, but also boasts the sensory capabilities of sight, hearing and touch. These enable it, for instance, to read the air pressure display on a machine, identify sounds and recognise objects – for example to determine whether or not a fire extinguisher is in the right place. The robot can even perform certain manual tasks on its own. Equipped with an additional gripping arm, it can open doors, dispose of refuse or press a lift button. It also delivers data that is more precise than our own eyes, ears and noses can perceive. It can identify the ambient temperature and detect the presence of gases in the air. Its ­latest trick is recognising the composition of the ground beneath it. “Some of its powers are superhuman,” says Fankhauser.

Despite the lack of light in the sewer, the robot seems to be finding its way quite well, plodding through the shallow channel at a leisurely pace. When the high-tech machine reaches a 20-centimetre-high ledge in a dry side arm of the sewer, Fankhauser brings it to a halt with a flick of the joystick. Initially, he is reluctant to give the ­robot the command to climb over the ledge. Although it has easily mastered this manoeuvre in laboratory conditions, down here it is a risky undertaking. “It’s an expensive machine,” says Fankhauser. But he gives it a try anyway. ANYmal doesn’t manage it at its first attempt. It stops at the ledge like a horse balking at a jump. “Default, start again,” radios Fankhauser. Now the robot elegantly places one leg after another over the ledge.

While Fankhauser and Hutter watch the robot continue on its patrol for a while, I return to the surface via the ­entry shaft. Sitting on a bench under a white canopy, their eyes firmly fixed on a laptop, are two assistants from ETH.

A generator is buzzing and a router is blinking – and many a cyclist passing by along the main road looks on in bemusement at the hubbub around the open manhole at the side of the road. Looking over the researchers’ shoulders, I can see an almost constant stream of data flickering across the screen. And thanks to state-of-the-art 3D and laser technologies, live images constantly transmitted by the robot from underground are visible on a separate monitor. 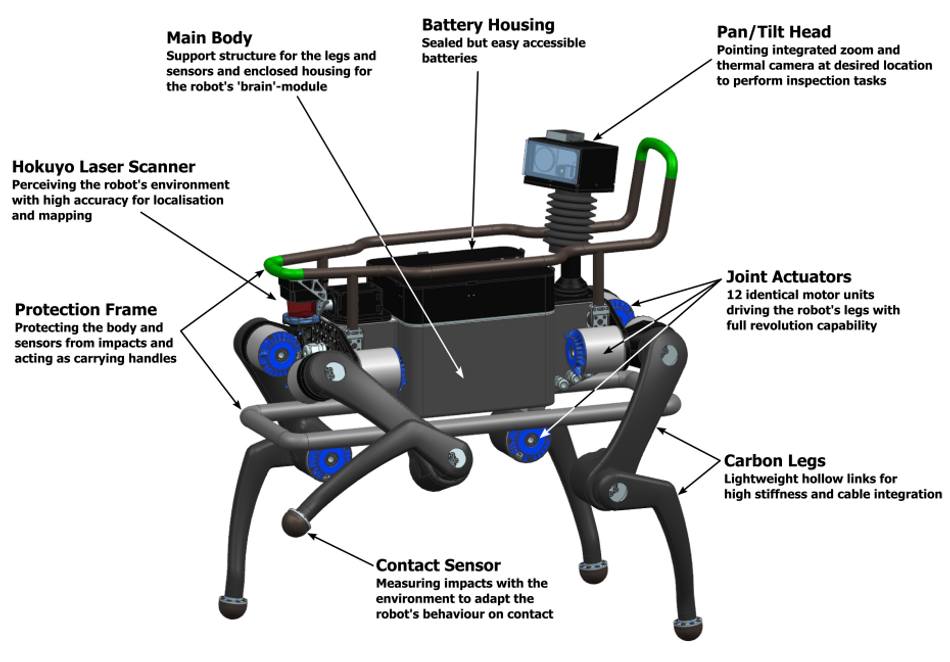 When Fankhauser radios from below that he wants the robot to touch the wall of the sewer with one of its legs, the two assistants have their work cut out for them. The software they are using has not been programmed for this. They respond quickly, however, taking an algorithm originally programmed to teach ANYmal to shake hands. But to make sure the robot doesn’t hit the wall with force, the researchers have to adapt the parameters. In this case, the problem is the angle at which the robot is to raise its leg. One of the assistants types in 100 and then gradually ratchets up the number. At 180 the perfect level is reached and the robot’s manoeuvre is successful.

Fankhauser and Hutter emerge from the cool, humid environment of the sewerage system into the warm autumn sunshine. They slowly begin to relax as they take off their reflective overalls. “The robot was in non-stop operation and collected a lot of data,” says Fankhauser as he undoes his high rubber boots and removes his protective clothing. Professor Hutter is satisfied, too: “All the teams will be taking home a huge volume of data to incorporate in their research.” They are now one step closer to their goal of delivering a robot that can function properly in challenging conditions underground. But their work is far from finished. The robot recorded 500,000 measurements per second over the course of the day. “That’s enough data to keep us busy for six months,” says Fankhauser with a laugh.

Using the fossil and fossilized footprints of a 300-million-year-old animal, an interdisciplinary team has developed a method for identifying the most likely gaits of extinct animals and designed a robot that can recreate their walk.