Senesky and her colleagues will prepare a set of experiments that will take graphene aerogel to the International Space Station. | Adobe Stock/Tryfonov

Think of a fruity Jell-O salad. Wiggle. Jiggle. You know the tune.

But now, imagine replacing all the liquid in that gel with nothing but air. What you would have left are bits of fruit fused together in a porous, dry form that weighs next to nothing.

Actually, what you would have is what scientists call an aerogel. First created in the 1930s on a bet between two researchers, aerogels have been getting a lot of attention lately for their remarkable physical properties. While there are many types of aerogels, one in particular is getting a lot more attention than the others – graphene aerogel.

“Graphene aerogel is something of a wonder material,” says Debbie Senesky, assistant professor of aeronautics and astronautics at Stanford and director of a team of engineers and scientists who are researching this particular type of aerogel. Over the next year or so, Senesky and her colleagues will prepare a set of experiments that will take graphene aerogel somewhere it has never gone before – to the International Space Station. 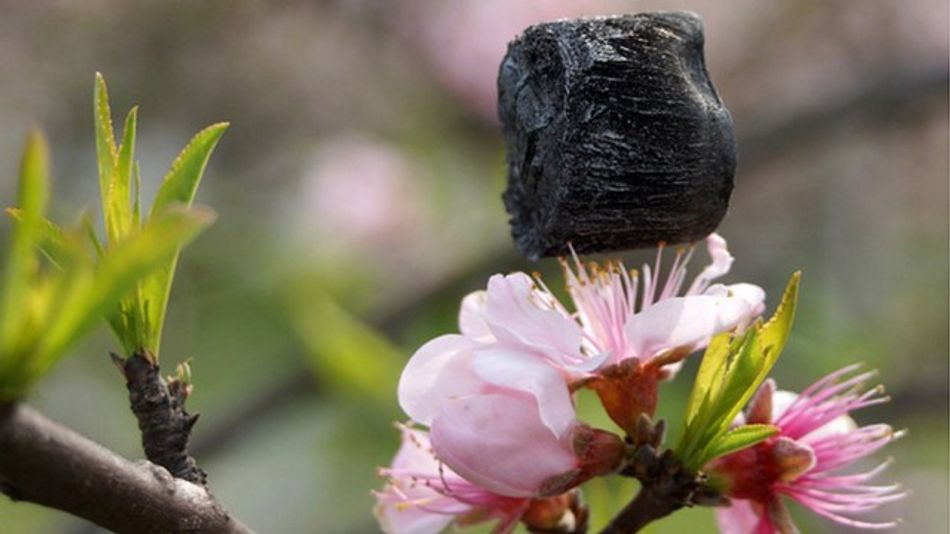 Graphene aerogel, propped up on the stamen of a flower. The cube, which is roughly an inch across, probably weighs less than 5 milligrams.

“With something so light, the effect of gravity can have a huge influence on its structure and maybe even the properties of the material,” says Jessica Frick, a postdoctoral researcher in Senesky’s lab. “We want to see what happens when we remove gravity.”

The first thing to know about graphene aerogel is that the basic building block of the material, graphene, is itself is a wonder material in its own right. Only discovered in 2004, graphene is made up of a single layer of carbon atoms bonded together in a hexagonal pattern. If you could peer into its nanoscale structure, you would see something that looks like chicken-wire fence. Graphene is incredibly light, strong and electrically conductive, among other properties.

Now, imagine billions of sheets of graphene bundled together in a disordered array, held together by nothing more than attractive atomic forces. What remains is an incredibly light, strong, electrically conductive and absorbent three-dimensional scaffolding of graphene.

One use for it is in the production of supercapacitors – devices that store large amounts of energy that can be rapidly released, says Thomas Heuser, a graduate student in materials science and engineering, who is on the research team. This might lead to cellphones that forgo batteries for capacitors that could be quickly charged multiple times a day, rather than for one longer period.

“It’s an interesting alternative to batteries. Graphene aerogel’s high surface area and electrical conductivity make it ideal for this type of storage,” he adds.

Others suggest its porous structure and absorbency might lend itself to advanced water purification filters or super-mops that sop up oil spills in the ocean. It is believed graphene aerogel can soak up 900 times its own weight in oil, get wrung out and be used again, like a space-age sponge.

By synthesizing graphene aerogel in the microgravity of low-Earth orbit, Senesky and team hope to learn how to make this wonder material using the limited resources available on the International Space Station. But that’s just the start.

“Eventually, such research could point to useful products, makeable only in space, that are valuable enough to justify transporting the solvents, raw materials and machinery necessary to manufacture graphene aerogels in orbit,” says Barrett Weiss, a graduate student on the team.

Senesky believes the possibilities are wide open. “That’s why there’s so much interest in studying the manufacturing of new materials in space,” she says.

Researchers have developed a new technique for shielding electronics in military and space exploration technology from ionizing radiation. The new approach is more cost effective than existing techniques, and the secret ingredient is…rust.

Like the weather in Texas, the moon’s temperature varies drastically over the course of its day and night cycle. The moon’s surface can reach scorching temperatures as high as 250 degrees F during the day and a frigid 208 degrees below zero at night.

A revolutionary material for aerospace and neuromorphic computing

First came the switch. Then the transistor. Now another innovation stands to revolutionize the way we control the flow of electrons through a circuit: vanadium dioxide (VO2).