A team of researchers from Carnegie Mellon University is starting a project to design and implement a non-invasive neural interface that can be used as a wearable device. This neural interface will be capable of both recording and stimulating the brain’s dynamic activity with high temporal and spatial resolution.

This novel neural interface will enable unprecedented access to neural circuits, to study brain function and dysfunction, as well as begin designing precise therapeutic interventions to treat neurodegenerative diseases like epilepsy, Alzheimer’s, and Parkinson’s. It can also be used as a non-invasive platform for realizing next generation brain-machine interfaces.

The team has received a $19.48 million grant from the Defense Advanced Research Projects Agency (DARPA), through DARPA’s “next-generation-nonsurgical-neurotechnology” (N3) program, which aims to develop high-performance, bi-directional brain-machine interfaces. With this funding, the team will develop the noninvasive neural interface, by harnessing novel concepts in physics, biology, and engineering through electricity, ultrasound, and light. The team of researchers is led by Associate Professor of Electrical and Computer Engineering (ECE) Pulkit Grover, along with Assistant Professor of ECE Maysam Chamanzar and Assistant Professor of Biomedical Engineering Jana Kainerstorfer.

The human brain is the most complex organ, and the most complex computational system, that we know of. When something goes wrong in the brain, because of an injury or disorder, we want to quickly and accurately deal with those problems. But because of the brain’s inherent complexity, achieving the level of accuracy of imaging and modulating needed to diagnose and treat these disorders could be challenging.

Sensing and stimulating neurons at a high resolution is hard enough even when electrodes are implanted in the brain—but another layer of extreme complexity is added if you want to achieve this noninvasively, through the skull.

“The perspective that our team adopted, which I think is quite novel,” explains Grover, “is that instead of fighting the physics that limit our ability to affect the brain noninvasively, we are harnessing the complexities of the physics and biology associated with this problem in order to improve the spatial and temporal resolution of measuring and stimulating the brain.”

For years, Chamanzar, Grover, and Kainerstorfer have been developing novel theories, technologies, and instrumentations that allow them to sense and stimulate the brain, from diagnosing worsening traumatic brain injuries and concussions, to treating epilepsy and migraines. 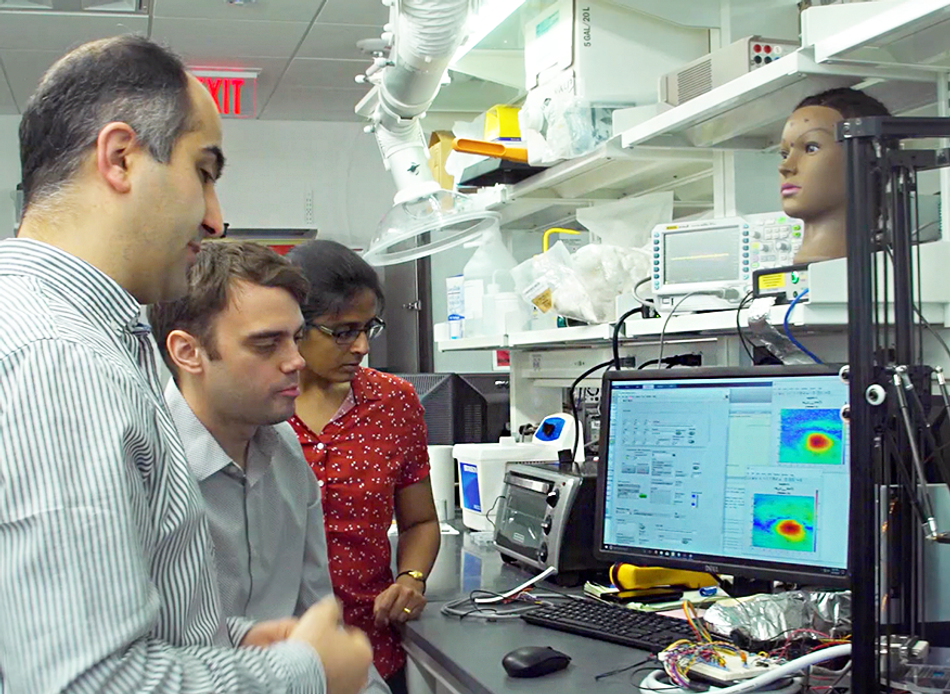 “Existing methods to interface with the brain usually involve invasive surgical procedures to provide high precision for recording or modulating the neuronal activity,” says Chamanzar. “On the other hand, noninvasive neural interfacing techniques that are applied from outside the scalp cannot provide the high temporal and spatial resolution. One of the most fundamental challenges of almost all existing noninvasive methods is the dispersion of electrical signals and optical or ultrasonic waves as they propagate through the brain tissue and get scattered.”

Half of the project, led by Chamanzar, is aimed at sensing the brain function, non-invasively. For sensing at a higher accuracy, compared to existing non-invasive techniques, the team will use Chamanzar’s novel concept of ultrasound-based light focusing to “pinpoint” light interaction in the brain. Using this enhanced focusing of light, the team uses Kainerstorfer’s near-infrared light sensing techniques to measure brain function. Using this, they aim to heighten the efficacy of both techniques and gain higher resolution readings, all while fitting the technology conveniently into a wearable “hat” worn on the scalp.

“What really excites me about this project is that we are ultimately trying to noninvasively help identify regions in the brain that are impacted by disease with a much higher resolution than previously possible,” says Kainerstorfer. “This work has implications for better diagnosis or localization of epilepsy, traumatic brain injuries, stroke, and other neurological diseases.”

This work has implications for better diagnosis or localization of epilepsy, traumatic brain injuries, stroke, and other neurological diseases.

Another half of the project, led by Grover, is aimed at stimulating the brain. Neuro-stimulation is commonly used in treating Parkinson’s, epilepsy, and many other neurological disorders. However, existing treatments require placement of batteries and electrodes inside the skull.

“Noninvasive brain stimulation technologies have hardly changed in the last few decades,” says Grover. “Our recent work shows how the nonlinearities of neurons—properties that make them hard to understand—can be harnessed to dramatically improve resolution of stimulation over state-of-the-art techniques.”

By using Grover’s novel current waveforms and electrode patch-designs, both tailored to exploiting the nonlinear properties of neurons, the team aims to provide targeted, localized treatments, without the need for surgical interventions. To accomplish this, the team will rely on the expertise of Maysam Chamanzar, who is co-leading this effort, in designing neural interfaces, for stimulation and recording tailored for neural stimulation based on dynamics of neural activity.

“We will design an array of electrical stimulators in the form of a flexible, wearable device that can be placed over scalp, in order to generate a pattern of electrical signals in the brain tissue by counterbalancing the dispersive effects of brain tissue, scalp, and skull,” says Chamanzar.

The team will also leverage ECE Professor Gary Fedder’s expertise in skin-compatible materials to realize this technology in the form of a wearable hat, and the expertise of Biology Professors Alison Barth and Aryn Gittis in experimental validation.

“Our techniques will make precise neurostimulation treatments accessible to a much larger section of population, and readily tested and applied to a broader set of disorders,” adds Grover.

Other Carnegie Mellon University faculty on this project include the College of Engineering’s Gary Fedder, Shawn Kelly, and Bin He, as well as Mellon College of Science’s Aryn Gittis and Alison Barth. Collaborating institutions include the University of Pittsburgh, where the work will be led by Douglas Weber and Robert Gaunt, Battelle Memorial Institute, and the Air Force Research Lab.

EPFL scientists have developed a miniaturized electronic platform for the stimulation and recording of peripheral nerve fibers on a chip.