In Jules Verne’s famous classic Twenty Thousand Leagues Under the Sea, the iconic submarine Nautilus disappears into the Moskenstraumen, a massive whirlpool off the coast of Norway. In space, stars spiral around black holes; on Earth, swirling cyclones, tornadoes, and dust-devils rip across the land.

All these phenomena have a particular shape in common: the vortex. From galaxies to stirring milk into coffee, vortices appear everywhere in nature – even in the subatomic world, when a stream of elementary particles or energy can spiral around a fixed axis like the tip of a cork-screw.

When particles move like this, they form what we call “vortex beams”. These beams are very interesting because they imply that the particle has a well-defined orbital angular momentum, which describes the rotation of a particle around a fixed point.

What this means is that vortex beams can give us new ways of interacting with matter, e.g. enhanced sensitivity to magnetic fields in sensors, or generate new absorption channels for the interaction between radiation and tissue in medical treatments (e.g. radiotherapy). But vortex beams also enable new channels in basic interactions among elementary particles, promising new insights into the inner structure of particles such as neutrons, protons or ions.

The strange thing about matter is that, along with its particle nature, it also has a wave-nature. This means that we can make massive particles form vortex beams by simply modulating their wave function. This can be done with a device called a “passive phase mask”, which can be thought of as a standing obstacle in the sea. When waves at sea crash into it, their “wave-ness” shifts and they form whirlpools. So far, physicists have been using the passive phase mask method to make vortex beams of electrons and neutrons.

But now, scientists from the lab of Fabrizio Carbone at EPFL are challenging this idea. Demonstrating for the first time that it is possible to use light to dynamically twist an individual electron’s wave function, the researchers were able to generate an ultrashort vortex electron beam and actively switching its vorticity on the attosecond (10-18 seconds) timescale.

To do this, the team exploited one of the fundamental rules governing the interaction of particles on the nanoscale level: energy and momentum conservation. What this means is that the sum of the energies, masses and velocities of two particles before and after their collision must be the same. Such a constraint is responsible for an electron to gain orbital angular momentum during its interaction with an ad hoc prepared light field, i.e. a chiral plasmon.

In experimental terms, the scientists fired circularly polarized, ultrashort laser pulses through a nano-hole fabricated onto a metallic film. This induced a strong, localized electromagnetic field (the chiral plasmon), and individual electrons were made to interact with it.

The scientists used an ultrafast transmission electron microscope to monitor the resulting phase profiles of the electrons. What they discovered was that, during the interaction of the electrons with the field, the wave function of the electrons took on a “chiral modulation”; a right- or left-handed movement whose “handiness” can be actively controlled by adjusting the polarization of the laser pulses. 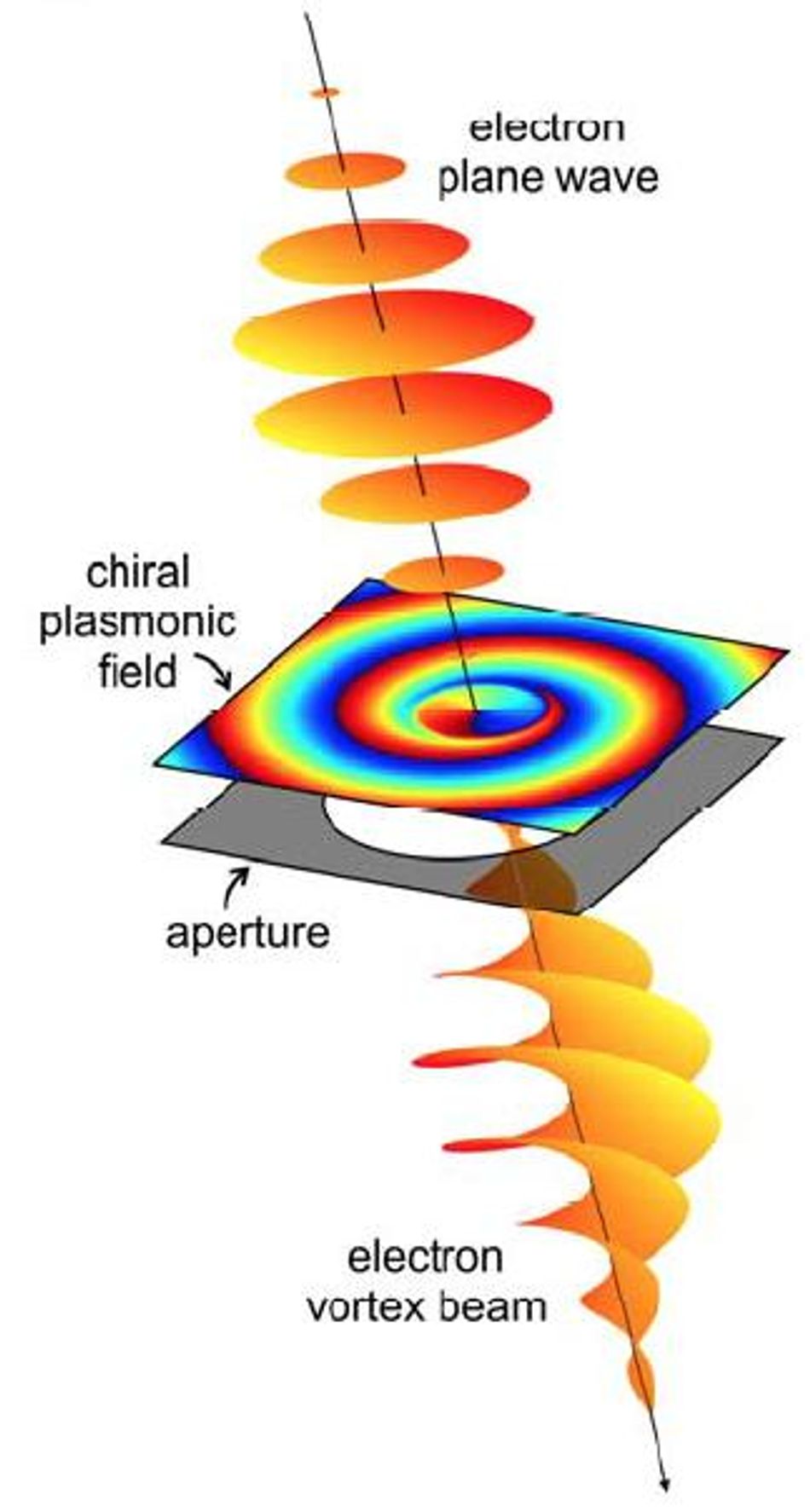 A schematic representation of the OAM transfer to electrons: the interaction between a pulsed electron plane wave synchronized with a chiral plasmonic field creates an OAM-carrying vortex electron wavepacket. Credit: F. Carbone, EPFL

“There are many practical applications from these experiments,” says Fabrizio Carbone. “Ultrafast vortex electron beams can be used to encode and manipulate quantum information; the electrons’ orbital angular momentum can be transferred to the spins of magnetic materials to control the topological charge in new devices for data storage. But even more intriguingly, using light to dynamically ‘twist’ matter waves offers a new perspective in shaping protons or ion beams such as those used in medical therapy, possibly enabling new radiation-matter interaction mechanisms that can be very useful for selective tissue ablation techniques.”

As progress in traditional computing slows, new forms of computing are coming to the forefront. At Penn State, a team of engineers is attempting to pioneer a type of computing that mimics the efficiency of the brain’s neural networks while exploiting the brain’s analog nature.