Polarization, the direction in which light vibrates, provides a lot of information about the objects with which it interacts, from aerosols in the atmosphere to the magnetic field of stars.  However, because this quality of light is invisible to human eyes, researchers and engineers have relied on specialized, expensive, and bulky cameras to capture it. Until now.

Researchers from the Harvard John A. Paulson School of Engineering and Applied Sciences (SEAS) have developed a metasurface attachment that can turn just about any camera or imaging system, even off-the-shelf systems, into polarization cameras. The attachment uses a metasurface of subwavelength nanopillars to direct light based on its polarization and compiles an image that captures polarization at every pixel.

The research is published in Optics Express.

“The addition of polarization sensitivity to practically any camera will reveal details and features that ordinary cameras can’t see, benefiting a wide range of applications from face recognition and self-driving cars to remote sensing and machine vision, “said Federico Capasso, the Robert L. Wallace Professor of Applied Physics and Vinton Hayes Senior Research Fellow in Electrical Engineering at SEAS and senior author of the study. 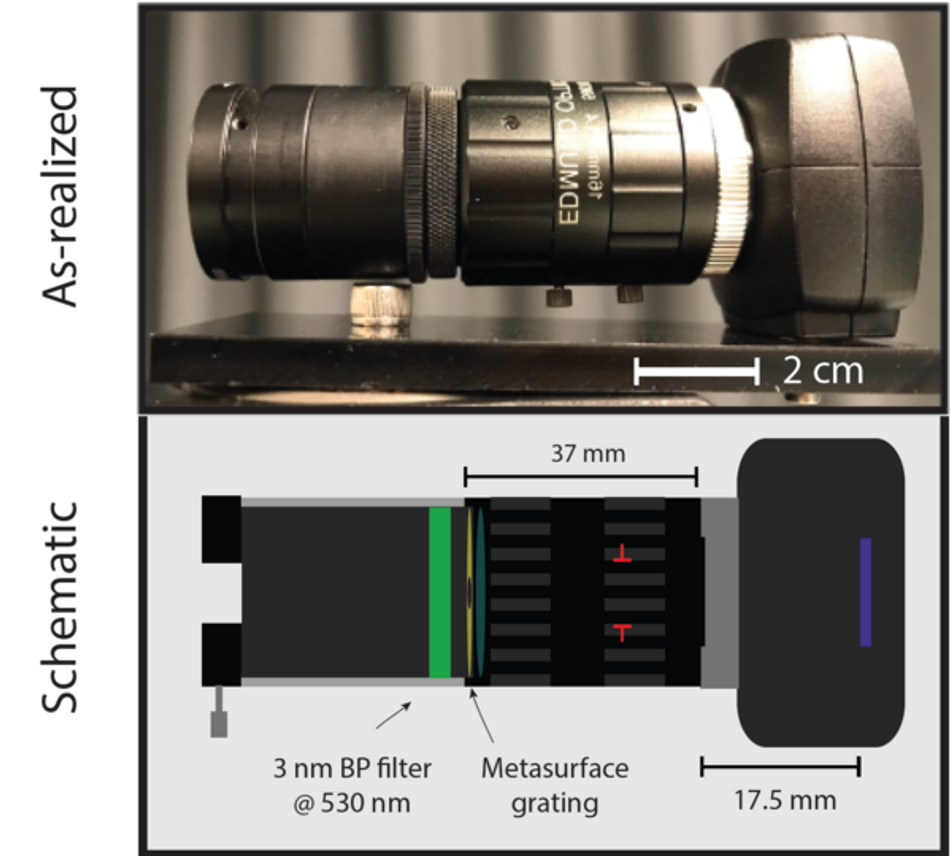 The grating is mounted just in front of the front face of a chosen objective lens in a tube that also houses a bandpass filter and a field stop. This is shown implemented (top), as a schematic (bottom). (Credit: Capasso Lab/Harvard SEAS)

In 2019, Capasso and his team developed a compact, portable camera that used a metasurface to image polarization in a single shot. In this research, the team explored how to generalize the concept of a polarization camera.

“After building the specialized polarization camera, we wanted to go more in depth and investigate the design rules and trade-offs that govern pairing a special polarization component with a conventional camera system,” said Noah Rubin, a graduate student at SEAS and co-first author of the study.

To demonstrate those design rules, the researchers attached the polarization metasurface to an off-the-shelf machine vision camera, simply screwing it on in front of the objective lens, in a small tube that also housed a color filter and field stop. From there, all they needed to do was point and click to get polarization information.

The nanopillars direct light based on polarization, which forms four images, each showing a different aspect of the polarization. The images are then put together, giving a full snapshot of polarization at every pixel.

The attachment could be used to improve machine vision in vehicles or in biometric sensors for security applications.

“This metasurface attachment is incredibly versatile,” said Paul Chevalier, a postdoctoral research fellow at SEAS and co-first author of the study. “It is a component that could live in a variety of optical systems, from room-size telescopes to tiny spy cameras, expanding the application space for polarization cameras.”

The research was co-authored by Michael Juhl, Michele Tamagnone and Russell Chipman. It was supported by the Earth Science Technology Office (ESTO) of the National Aeronautics and Space Administration (NASA) and by the U.S. Air Force Office of Scientific Research under grant no. FA9550-18-P-0024. It  was performed in part at the Center for Nanoscale Systems (CNS), a member of the National Nanotechnology Coordinated Infrastructure (NNCI), which is supported by the National Science Foundation under NSF award no. 1541959.

New research harnesses the power of structured light over space

Researchers, manufacturers, and diagnosticians in specialized fields know that the smaller the scale, the more important it is that imaging devices are free from any particles that might obstruct or blur a magnified sample.