Mikhail Lukin, The George Vasmer Leverett Professor of Physics (not pictured) and GSAS students, David Levonian, (left) and Mihir Bhaskar are Harvard researchers who have built the missing link for an ultra-secure quantum internet inside LISE. (Kris Snibbe/Harvard Staff Photographer)

Researchers demonstrate the missing link for a quantum internet

A quantum internet could be used to send un-hackable messages, improve the accuracy of GPS, and enable cloud-based quantum computing. For more than twenty years, dreams of creating such a quantum network have remained out of reach in large part because of the difficulty to send quantum signals across large distances without loss.

Now, Harvard and MIT researchers have found a way to correct for signal loss with a prototype quantum node that can catch, store and entangle bits of quantum information. The research is the missing link towards a practical quantum internet and a major step forward in the development of long-distance quantum networks.

“This demonstration is a conceptual breakthrough that could extend the longest possible range of quantum networks and potentially enable many new applications in a manner that is impossible with any existing technologies,” said Mikhail Lukin, the George Vasmer Leverett Professor of Physics and a co-Director of Harvard Quantum Initiative. “This is the realization of a goal that has been pursued by our quantum science and engineering community for more than two decades.”

Every form of communication technology— from the first telegraph to today’s fiber optic internet — has had to address the fact that signals degrade and are lost when transmitted over distances. The first repeaters, which receive and amplify signals to correct for this loss, were developed to amplify fading wire telegraph signals in the mid-1800s.  Two hundred years later, repeaters are an integral part of our long-distance communications infrastructure.

"This is the realization of a goal that has been pursued by our quantum science and engineering community for more than two decades."

In a classical network, if Alice in New York wants to send Bob in California a message, the message travels from coast to coast in more or less a straight line. Along the way, the signal passes through repeaters, where it is read, amplified and corrected for errors. The whole process is at any point vulnerable to attacks.

If Alice wants to send a quantum message, however, the process is different. Quantum networks use quantum particles of light – individual photons – to communicate quantum states of light over long distances. These networks have a trick that classical systems don’t: entanglement.

Entanglement — what Einstein called “spooky action at a distance” — allows bits of information to be perfectly correlated across any distance. Because quantum systems can’t be observed without changing, Alice could use entanglement to message Bob without any fear of eavesdroppers. This notion is the foundation for applications such quantum cryptography — security that is guaranteed by the laws of quantum physics.

Quantum communication over long distances, however, is also affected by conventional photon losses, which is one of the major obstacles for realizing large-scale quantum internet.  But, the same physical principle that makes quantum communication ultra-secure also makes it impossible to use existing, classical repeaters to fix information loss.

How can you amplify and correct a signal if you can’t read it? The solution to this seemingly impossible task involves a so-called quantum repeater. Unlike classical repeaters, which amplify a signal through an existing network, quantum repeaters create a network of entangled particles through which a message can be transmitted.

In essence, a quantum repeater is a small, special-purpose quantum computer. At each stage of such a network, quantum repeaters must be able to catch and process quantum bits of quantum information to correct errors and store them long enough for the rest of the network to be ready. Until now, that has been impossible for two reasons: First, single photons are very difficult to catch. Second, quantum information is notoriously fragile, making it very challenging to process and store for long periods of time.

Lukin’s lab, in collaboration with Marko Loncar, the Tiantsai Lin Professor of Electrical Engineering at the Harvard John A. Paulson School of Engineering and Applied Sciences (SEAS), Hongkun Park, Mark Hyman Jr. Professor of Chemistry at the Harvard Faculty of Arts and Sciences (FAS), and Dirk Englund, Associate Professor of Electrical Engineering and Computer Science at Massachusetts Institute of Technology (MIT), has been working to harness a system that can perform both of these tasks well — silicon-vacancy color centers in diamonds. 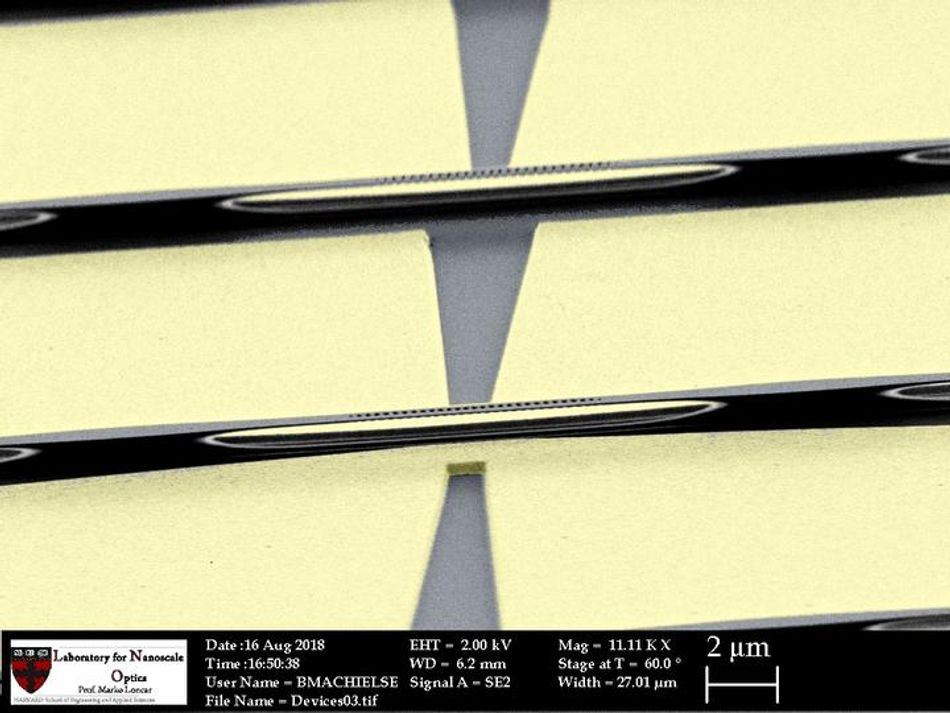 A scanning electron micrograph (SEM) of the devices used in this experiment. Suspended diamond strings (gray) carry information-bearing photons to a cavity. This cavity confines the light on top of an implanted silicon atom memory (SiV), such that the information is transferred onto the memory. Electrodes (gold) are then used to manipulate the information stored on the SiV memory. (Image courtesy of Bart Machielse/ Harvard University)

These centers are tiny defects in a diamond’s atomic structure that can absorb and radiate light, giving rise to a diamond’s brilliant colors.

“Over the past several years, our labs have been working to understand and control individual silicon-vacancy color centers, particularly around how to use them as quantum memory devices for single photons,” said Mihir Bhaskar, a graduate student in the Lukin group.

The researchers integrated an individual color-center into a nanofabricated diamond cavity, which confines the information-bearing photons and forces them to interact with the single color-center. They then placed the device in a dilution refrigerator, which reaches temperatures close to absolute zero, and sent individual photons through fiber optic cables into the refrigerator, where they were efficiently caught and trapped by the color-center.

The device can store the quantum information for milliseconds — long enough for information to be transported over thousands of kilometers. Electrodes embedded around the cavity were used to deliver control signals to process and preserve the information stored in the memory.

“This device combines the three most important elements of a quantum repeater — a long memory, the ability to efficiently catch information off photons, and a way to process it locally,” said Bart Machielse, a graduate student in the Laboratory for Nanoscale Optics.  “Each of those challenges have been addressed separately but no one device has combined all three.”

“Currently, we are working to extend this research by deploying our quantum memories in real, urban fiber-optic links,” said Ralf Riedinger, a postdoctoral candidate in the Lukin group. “We plan to create large networks of entangled quantum memories and explore the first applications of the quantum internet.

"We plan to create large networks of entangled quantum memories and explore the first applications of the quantum internet."