On Saturday 16 October 2021, at 11:34 CEST, an unusual NASA mission will set off from Cape Canaveral on an Atlas launch vehicle, beginning its journey across the Solar System. The targets of the Lucy mission are the Trojan asteroids, which share Jupiter's orbit around the Sun. Scientists suspect that they are very different from the planetoids in the Main Asteroid Belt between Mars and Jupiter. Asteroids are considered to be witnesses of the formation of the planets in the Solar System and can provide information about their development. The German Aerospace Center (Deutsches Zentrum für Luft- und Raumfahrt; DLR) is involved in the mission's scientific activities.

After a journey lasting several years, Lucy will be the first spacecraft to visit members of the 'Trojan asteroids'. The Trojans are small planetoids that found their place in the Solar System, two regions on the orbit of Jupiter, over four billion years ago. Unlike the many hundreds of thousands of celestial bodies in the Main Asteroid Belt, these bodies are more than 700 million kilometres from the Sun and are believed to be asteroids that originated beyond Jupiter's orbit. "This makes these 'time capsules' very interesting for closer study," says Stefano Mottola of the DLR Institute of Planetary Research, who is involved in Lucy's scientific activities. "We hope to gain new and significant knowledge about the Solar System's earliest period and the formation of the planets." 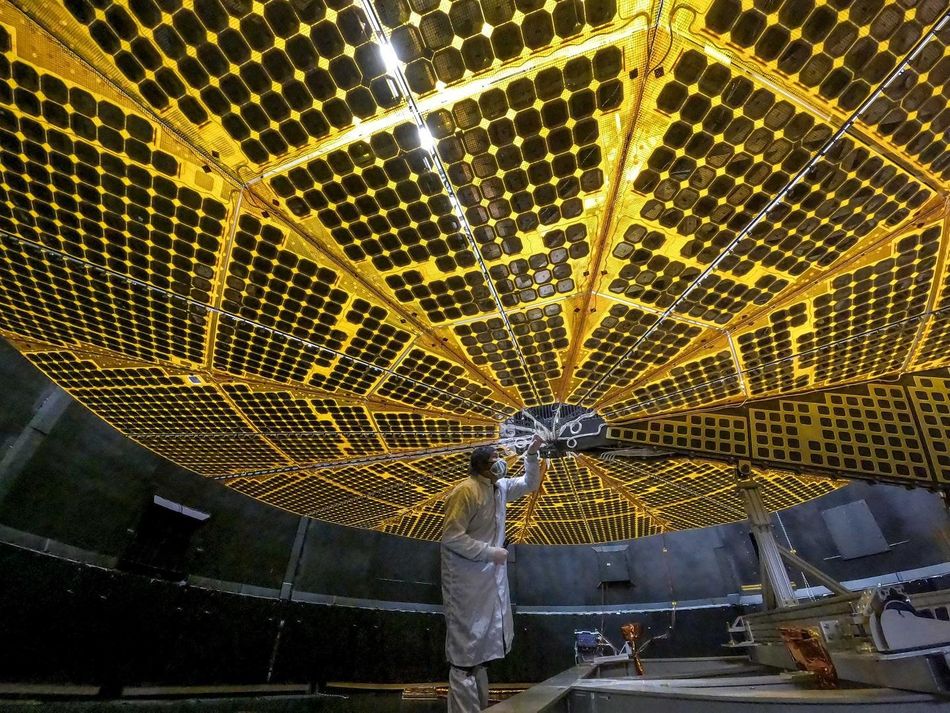 The name Lucy is not an abbreviation, as is so often the case with NASA missions. It refers to one of the most important discoveries in anthropological research – that of the 3.2-million-year-old partial skeleton of Australopithecus afarensis in Ethiopia, known as an 'early human'. Palaeontologist Donald Johanson, who co-discovered Lucy, celebrated by throwing a party with his team on the evening of that November day in 1974. As the night wore on, the Beatles' perennially popular song Lucy in the Sky with Diamonds played repeatedly on the tape recorder. There is still some speculation over the initial letters of the three title nouns, but the skeleton needed a name. In Ethiopia, the skeleton is also referred to as 'Dinkinesh', which means 'you are marvellous' in the Amharic language. With her bones, scientists were able to decipher the origins of humankind. The NASA spacecraft is also intended to help, in a figurative sense, decode the origins of the Solar System.

The 14-member core scientific team will require a great deal of patience. After launch, Lucy will not reach the Trojan asteroids until 2027, following a tortuous path through the inner Solar System. But before that, in April 2025, it will pass the four-kilometre, main-belt asteroid Donaldjohanson, named after one of Lucy's discoverers. The spacecraft, which will weigh approximately one and a half tonnes at launch, carries three scientific instruments with which the target asteroids will be imaged and have their chemical-mineralogical compositions and physical parameters determined using spectrometers. Lucy is the 13th member of NASA's highly successful Discovery class – highly specialized, comparatively small and organisationally 'lean' space missions. Harold Levison and Cathy Olkin from the Southwest Research Institute in Boulder, Colorado, USA, are the mission's Principal Investigator and Deputy Principal Investigator, respectively. The mission will be controlled by NASA's Goddard Spaceflight Center in Greenbelt, Maryland. 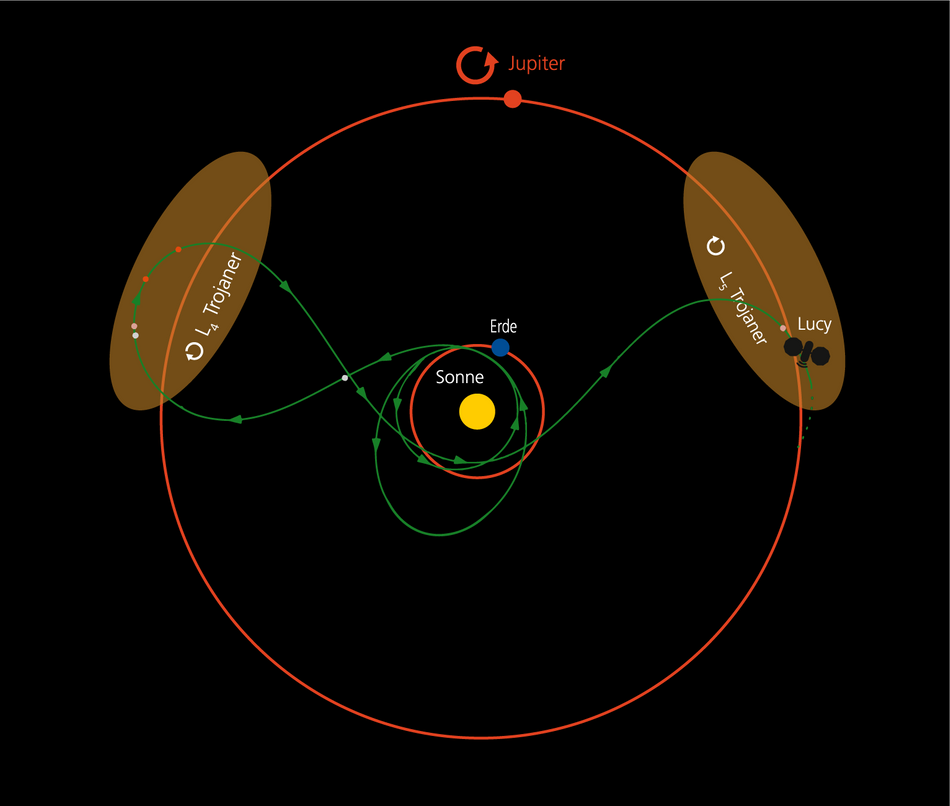 A trajectory like never before. Credit: Southwest Research Institute/DLR

DLR's involvement includes Stefano Mottola from the Institute of Planetary Research in Berlin, who is a member of the Lucy science team. Mottola was also significantly involved in the Rosetta, Dawn and Hayabusa2/MASCOT missions. "During the mission preparations for Lucy, I studied the target asteroids with Earth-based telescopes and obtained light curves for them," Mottola explains. "Using these observations, we can optimise the flybys." Over the course of his career, Mottola has been involved in the telescopic discovery of hundreds of asteroids. "We will also support the mission upon arrival via calculations of body shapes, creation of image mosaics and atlases, and mapping luminosities and composition. The exact shape of the asteroids will be derived from the data obtained using the navigation cameras." In addition, Martin Pätzold of the University of Cologne, supported by the German Space Agency at DLR, will investigate the mass and composition of the asteroids by analysing the redshift and blueshift of reflected radio signals – the stretching and compression of the radio waves caused by the Doppler effect.

Jupiter, its Trojans and Greeks

The Trojans are a special group of asteroids, small bodies with diameters of up to 250 kilometres, located in regions that precede or follow the planet Jupiter at a constant distance along its orbit around the Sun. These are the points in a two-body system – such as the Sun and Jupiter in this case – at which gravitational and centrifugal forces balance one another out. The total of five points at which this occurs, from Lagrange-1 (L1) to Lagrange-5 (L5), are named after the Italian-French astronomer and mathematician Joseph-Louis de Lagrange (1736-1813). 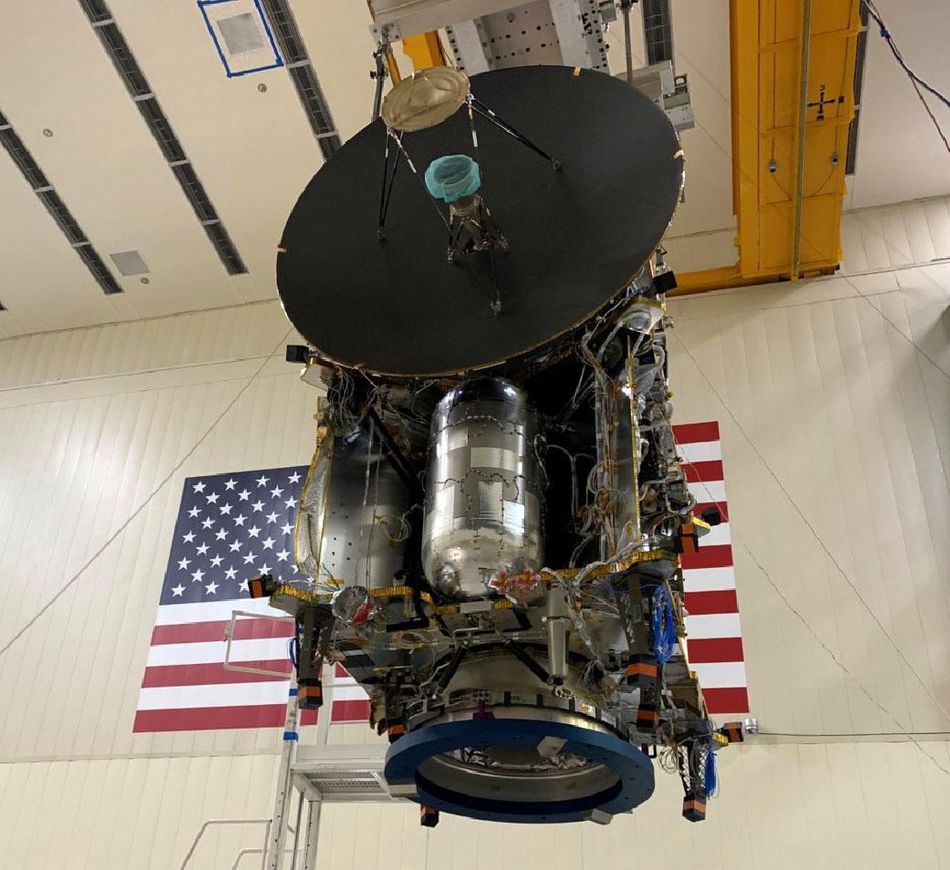 Two of these Lagrange points, L4 and L5, are always stable and each lie at one vertex of an equilateral triangle with the Sun and Jupiter at the other vertices. Today, just under 10,000 of these objects are known to exist in the vicinity of these two Lagrange points. They are not located exactly at these two points, but orbit them at different distances so that they form an asteroid 'cloud'. However, as in the Main Asteroid Belt, as many as one million similar bodies are suspected to exist. They are very difficult to detect with telescopes because of their dark surface and small size. The International Astronomical Union (IAU) has taken inspiration from the Iliad, Homer's famous ancient saga of the battle for Troy, for the naming of the asteroids. It refers to the asteroids moving ahead of Jupiter as the camp of the 'Greeks', which take the names of the Greek heroes. The asteroids moving behind Jupiter were named 'Trojans', and take the names of the heroes from the legendary city of Asia Minor. Since all the names appearing in the Iliad have now been given to Trojan asteroids, newly discovered bodies are being named by the IAU after modern 'heroes', great athletes who participated in the modern Olympic and Paralympic Games.

This will be the first time that bodies orbiting the Sun at Lagrange points along a planetary orbit have been visited by a spacecraft. Jupiter itself plays no role in the mission. It will be many hundreds of millions of kilometres away from Lucy during both phases of the mission. In planetary research, the Trojan asteroids have been a top priority as a new target for years. Researchers suspect that, in contrast to Main Belt asteroids, these Trojans have little in common with the bodies of the inner Solar System and more with the outer regions of the planetary system.

The realm of the gas giants and their icy moons begins with Jupiter. Even further away from the Sun, beyond Neptune, stretches the region in which the comets originate. These bodies of dust and ice also played an important role in the formation and evolution of the Solar System. This is the home of the 'transneptunian objects', to which Pluto also belongs. Just as the asteroids of the Main Belt are remnants of the formation of the four rocky planets, the Jovian Trojans are likely to be remnants of the source material of the outer planets, with origins at very different distances from the Sun. They may even contain organic molecules, which originated there before later reaching the inner Solar System, and thus Earth – substances that could have played an important role in the emergence of life almost four billion years ago. 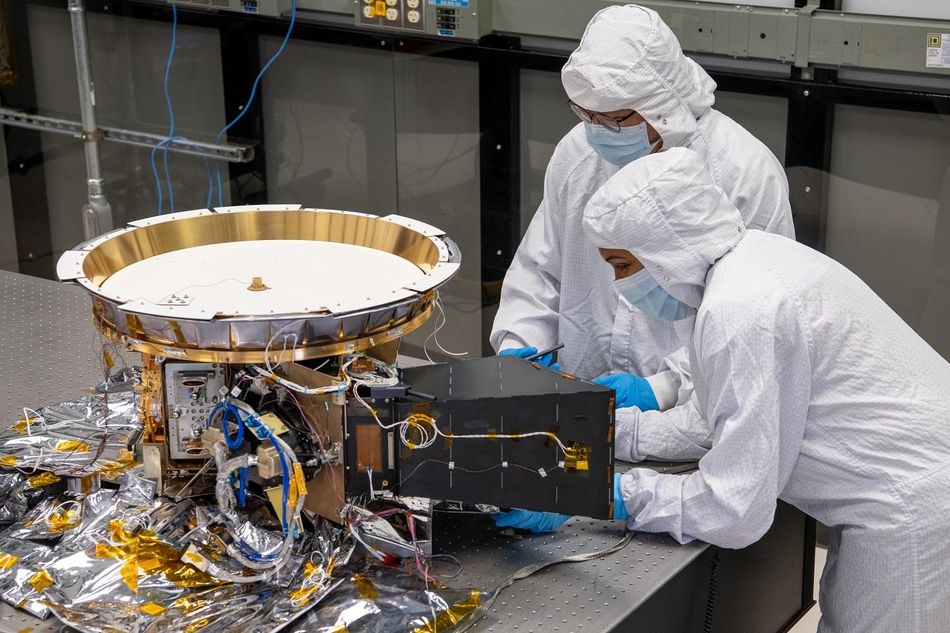 Into the 'camp' of the Greeks, back to Earth and on to the Trojans

Arriving at its destination in the realm of the L4 asteroids, the 'Greek camp', Lucy will examine at close range the asteroids Eurybates (August 2027) and its small moon Queta, discovered by the Lucy team only last year, Polymele (September 2027), Leucus (April 2028) and Orus (November 2028). Then, Lucy will be steered back towards Earth and the inner Solar System – a first in the history of spaceflight. With the help of a 'gravity assist manoeuvre', the spacecraft will then be steered to the L5 point, where Lucy will reach the asteroid Patroclus and its binary companion Menoetius in the 'Trojan camp'. The nominal mission will then be over, but if fuel and resources necessary for mission operations are still available, the mission could be extended. Lucy would then return to Earth once again and be steered back towards the asteroid cloud at L4, arriving at the end of the decade.

The study of small bodies in the Solar System has become increasingly important in recent decades. Asteroids and comets are in most cases barely altered witnesses to the formation of planets a little more than four and a half billion years ago. The further away from the Sun they formed – and remain today – the less they have been exposed to the Sun's influence and therefore the less they have been altered. Four and a half billion years is a period of time so long that it is difficult to comprehend on human timescales, but planetary research has recently become increasingly successful in reconstructing the processes that took place in the first million years following the formation of the Sun 4.567 billion years ago. The planets formed surprisingly quickly at that time, in just a few million to tens of millions of years. This period was decisive for their further development, which is seen in the diversity of the planets and their moons. However, as they have all changed considerably since then, only asteroids and comets allow us to look back to that time and decipher the processes precisely.