To grow its famous grapes, California’s wine country along the state’s north coast benefits from the cooling influence of the Pacific Ocean and the dry summers characteristic of the region.

To grow its famous grapes, California’s wine country along the state’s north coast benefits from the cooling influence of the Pacific Ocean and the dry summers characteristic of the region. That same climate also supports a very different “crop” nearby: NASA's newest supercomputers and the fruitful research they make possible.

Specifically, it’s perfect for the individual units of the Modular Supercomputing Facility, or MSF, at NASA’s Ames Research Center in California’s Silicon Valley. By cleverly using climate to cool high-powered computers naturally, water use is reduced by 96% and electricity used for cooling by 91%, compared with running the same computer resources installed in a traditional data center. 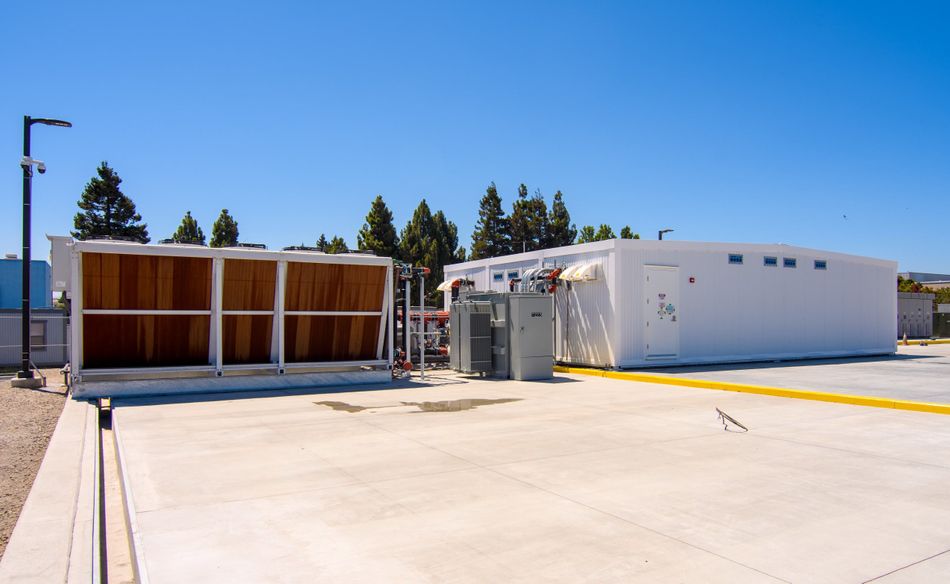 Water that is heated by the computers in the module housing the Aitken supercomputer (right) flows to the coolers (left), at the Modular Supercomputing Facility at NASA's Ames Research Center in California's Silicon Valley. Fans on top of the coolers draw outside air over pipes located directly behind the brown-colored material, called the evaporative media, transferring the heat in the water into the air and dissipating it into the environment. When the outside air exceeds 80 degrees Fahrenheit, the evaporative media is soaked with water that lowers the temperature of the air just before it blows over the pipes, improving the heat transfer on warm days. Credits: NASA/Ames Research Center/Derek Shaw

The facility, which opened in August 2019, uses self-contained modules to house its machines – think "tiny homes" for big computers. People who participate in the tiny house movement choose for their living space to be small, with low energy demands, allowing them to save money and use fewer environmental resources. And the goals are much the same here.

So, while the MSF is leading the way in enhancing NASA’s high-performance computing, it’s also dramatically reducing the amount of power and water needed to cool a supercomputing facility.

A New Take on Advanced Computing

High-end computing already plays a big role in the agency’s work, including the research, design and testing of capabilities needed to send humans to the Moon with the Artemis program. Supercomputers calculate equations so fast that they can simulate thousands of scenarios – different versions of a rocket launch, for example, and the many conditions that will influence it – without having to build physical test models for each one. These computers are both saving time and money and increasing mission safety and success.

When the agency’s primary computing center, the NASA Advanced Supercomputing Facility, or NAS, also at Ames, needed to expand its critical hardware capabilities, the agency found that the cost of building a modular facility would be much less than replacing or retrofitting the existing building. At the same time, NASA engineers were exploring technologies to save energy and water by taking advantage of the area’s unique environmental conditions, and the idea to use dry, cool air floated to the top. So, NASA built a prototype system of two modules for the new Electra supercomputer, at a site just across from the main NAS facility – part of a brand-new take on advanced computing.

“NASA is taking a unique approach to modular high-performance supercomputing on a scale that hasn’t been done in the industry before,” said William Thigpen, who manages the agency’s High-End Computing Capability resources at NAS. “If the agency anticipates a need for big computational jobs to be completed quickly for a particular mission, we can rapidly respond to that using this model.”

A Most Energy-efficient Data Center

The main NAS facility is a large office building housing people working there and NASA’s Pleaides supercomputer under the same roof. Supercomputers generate heat, and they can operate well above the “room temperature” optimal for a comfortable office environment. So Pleaides, as a housemate for humans, needs to consume more electricity and water for cooling than the new computers, like Electra, housed in the stand-alone modules.

The modules use a combination of outdoor air, fan technology, evaporative coolers and a circulating water system to remove the heat generated by the computer’s processors.

When the weather is cool, drawing outside air through the coolers is enough to drop the water temperature into the right range to effectively cool the computing racks. But when the weather heats up, the system needs extra cooling. Luckily, when temperatures soar in the Bay Area, humidity drops. This triggers a drip system in the evaporative coolers that spreads a thin sheet of water across a large surface. This water will evaporate into the dry air, lowering the temperature of the air. The chilled air is then drawn through the cooler so it can remove the heat from the system’s circulating water. Now at a suitable temperature for the computers, the water is piped back into the module’s racks.

The MSF’s cooling technology is so efficient that, with the same amount of electricity used on cooling, it can deliver more than six times the amount of computing power as the main NAS facility. Each module will save millions of gallons of water per year. NASA is committed to reducing the environmental impact of its labs and facilities, and these results made the prototype facility one of the most energy-efficient data centers in the world.

The design of the MSF also saves money, allowing the agency to do more with taxpayer dollars. The savings will be put toward purchasing additional computing modules that will make more groundbreaking results possible in engineering and scientific research. After the success of the Electra prototype, NASA’s newest supercomputer, Aitken, was installed in the first module of the new facility, located just down the road. The MSF’s one-acre site will be able to support 12 computing modules and four data storage modules in all.

The NAS facility is already used by more than 1,500 scientists and engineers from NASA centers, universities and industry, and the MSF is expanding that power. These supercomputers support a wide variety of science and engineering projects at NASA that require enormous amounts of computing power, including space exploration projects, aeronautics research and Earth science.

With this approach, new systems can be deployed quickly. The latest technologies can be added relatively quickly, and entirely new systems can be built out in months, rather than years. That means users’ work won’t be significantly disrupted, and NASA’s missions that rely on these computers can keep moving forward – including everything it will take as humanity marches toward the Moon to stay.

Demonstrating a new type of space technology, 105 of the world’s smallest free-flying satellites have orbited the Earth, sending short telemetry signals received by a ground station at Cornell.

A new radiation-hardened, multi-processor, Arm-based spacecraft processor is being developed at Michigan in a project led by Boeing and funded by NASA.