As a key partner in the mission, NASA provides the synthetic aperture radar, called VenSAR, to make high-resolution measurements of the planet’s surface features.

On June 10, 2021, the European Space Agency (ESA) announced the selection of EnVision as its newest medium-class science mission. EnVision will make detailed observations of Venus to understand its history and especially understand the connections between the atmosphere and geologic processes. As a key partner in the mission, NASA provides the synthetic aperture radar, called VenSAR, to make high-resolution measurements of the planet’s surface features.

With significantly higher resolution than that of NASA’s Magellan mission, which captured images of Venus in the early 1990s, VenSAR will improve our understanding of the planet’s surface features. Repeated observations and comparisons with Magellan imagery promise the opportunity for planetary scientists to detect volcanic, tectonic, and geomorphic changes over multiple timescales at a resolution that gets to the level of individual landslides. Scott Hensley of NASA’s Jet Propulsion Laboratory in Southern California is the instrument project scientist.

“EnVision’s VenSAR will provide a unique perspective with its targeted studies of the Venus surface, enriching the roadmap of Venus exploration,” said Adriana Ocampo, EnVision program scientist at NASA Headquarters in Washington. 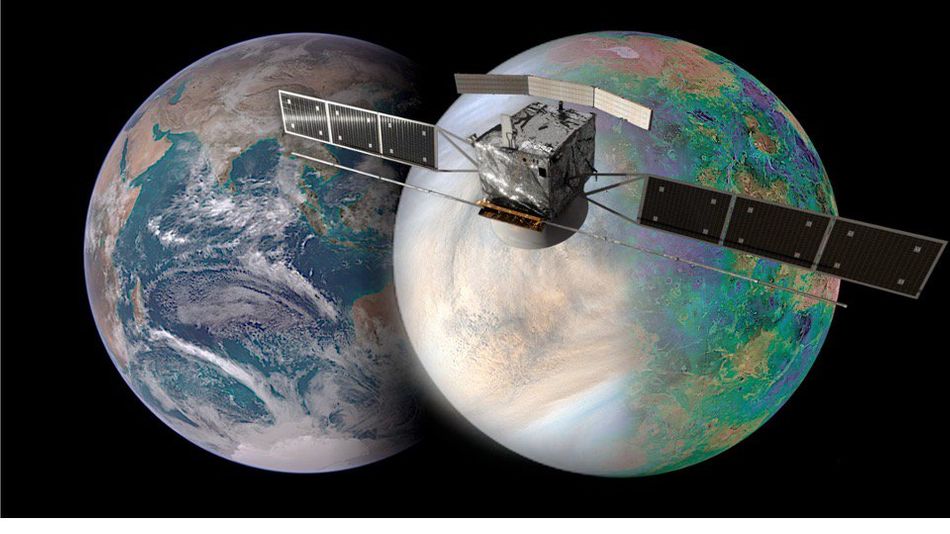 The image shows Earth (left) and Venus (right), and how similar they are in size. How did these sister planets evolve to end up so different? The EnVision mission (spacecraft render in image) aims to answer some of these key questions, and the NASA-provided EnVision Venus Synthetic Aperture Radar (VenSAR) will play a center role. The VenSAR will be built and operated by JPL.Credit: European Space Agency / Paris Observatory / VR2Planets  In a “triple crown” moment for the Venus science community, the new mission to Venus comes at a time when NASA has just announced their upcoming DAVINCI+ (Deep Atmosphere Venus Investigation of Noble gases, Chemistry, and Imaging) and VERITAS (Venus Emissivity, Radio Science, InSAR, Topography, and Spectroscopy) missions. Working in concert, the trio of new spacecraft will provide the most comprehensive study of Venus ever.

“I am delighted that the synergistic capabilities of these three new missions will transform our fundamental understanding of Venus,” said Lori Glaze, director of NASA’s Planetary Science Division at the agency’s headquarters. “ESA’s EnVision mission will provide unparalleled high-resolution imaging and polarimetry capabilities. High-resolution images of many dynamic processes at Mars profoundly changed the way we thought about the Red Planet and images at similar scales have the potential to do the same for Venus.”

The new observations can also tell us about Venus’ evolution. “The combined results of EnVision and our Discovery missions will tell us how the forces of volcanism, tectonics and chemical weathering joined together to create and sustain Venus’ runaway hothouse climate,” said Tom Wagner, NASA’s Discovery Program scientist at NASA Headquarters.

This video describes the deployment of EnVision's instruments VenSAR and SRS, as well as some basic spacecraft operations. VenSAR is a Synthetic Aperture Radar, and will map the surface of Venus using a range of modes including imaging at spatial resolutions of 10 m to 30 m, altimetry, polarimetry and radiometry. The Subsurface Sounding Radar (SRS) will penetrate into the top kilometre of the subsurface, and search for underground layering and buried boundaries. Three spectrometers (VenSpec-U, VenSpec-H and VenSpec-M), operating in the ultraviolet and infrared, will map trace gases, including searching for volcanic gas plumes, above and below the clouds, and map surface composition. A gravity and radio science investigation will use radio tracking to map the planet’s gravity field, constraining internal structure, and will measure atmospheric properties through radio occultation. Credit: European Space Agency / Paris Observatory / VR2Planets

Of the three missions, the DAVINCI+ atmospheric entry probe can provide the only direct measurements of the Venus atmosphere – for the first time since NASA’s Pioneer Venus probe in 1978 and the USSR's Vega balloons in 1985. Many of the proposed measurements are of highest decadal priority and can only be acquired by traveling directly through the planet’s harsh atmosphere.

The global topography data generated by VERITAS is also a unique contribution among the three missions. It will provide scientists with high-resolution topography and a global location map for Venus that will serve as a reference system for all past and future surface data collected.

NASA is a partner with ESA on the EnVision mission. JPL, a division of Caltech in Pasadena, California, will provide the VenSAR radar and will have responsibility of the overall instrument management and provision. EnVision VenSAR is part of NASA’s Discovery Program. And, NASA’s Marshall Space Flight Center in Huntsville, Alabama, manages the Discovery Program for the agency’s Science Mission Directorate in Washington, D.C.

Getting NASA Data to the Ground With Lasers

The new system improves the capabilities of NASA JPL’s Center for Near Earth Object Studies to assess the impact risk of asteroids that can come close to our planet.