Optics-based technologies such as optical fibers have strongly influenced the age of wired communication. Now they look set to revolutionize wireless communications as well and solve key issues with traditional radio-based approaches by using steerable, narrow infrared beams to send large amounts of data to user devices individually in an energy efficient and secure manner. Researchers at Eindhoven University of Technology are developing new methods for infrared wireless communications that could change how we access data forever.

The modern world is fast becoming a wireless, infrared world! Until now, the majority of wireless communications, both indoor and outdoor, have been radio-based. Although signal modulation techniques can squeeze more data into the limited radio-frequency spectrum and spatial multiplexing can combine multiple data signals into one signal without requiring more spectrum, we are struggling to meet our exponentially growing data demands.

The solution could be optical wireless communications, which use optical wavelengths over a wide spectral range from a few hundred nanometers to a few micrometers that includes visible and infrared radiation. Ton Koonen and researchers at the Institute for Photonic Integration are designing prototype systems with a capacity of more than two thousand times that of current shared WiFi systems. They have presented their work in an invited paper for the themed issue “Optical wireless communication” of the Royal Society’s Philosophical Transactions A, the oldest ongoing scientific journal in the world. Isaac Newton’s first paper New Theory about Light and Colours was published in the same journal in 1672. 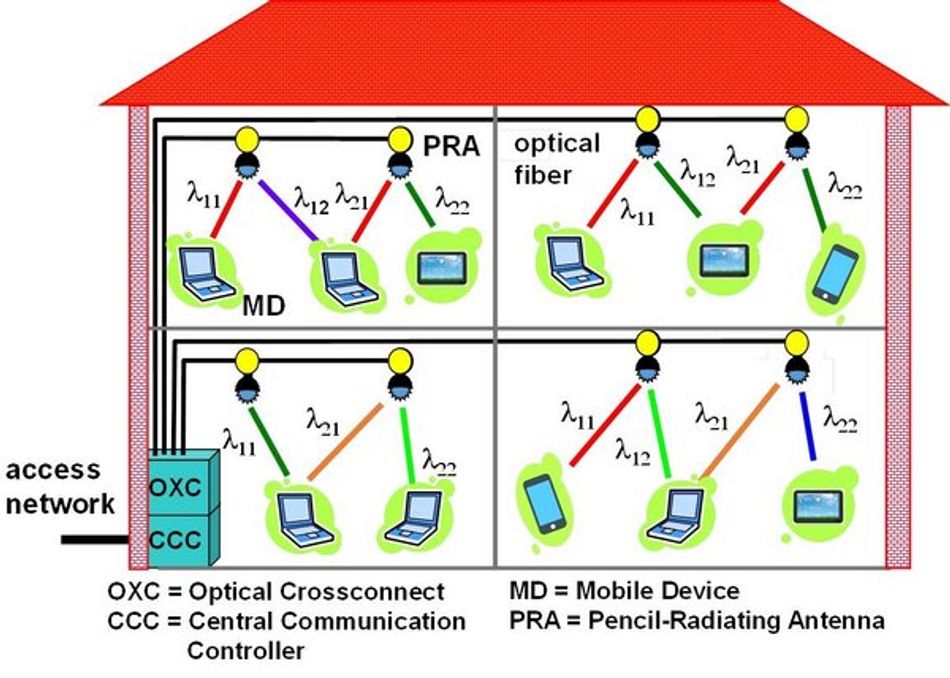 Optical wireless communications by narrow light beams have many advantages; they are easily directable, more energy-efficient than radio waves, have lower levels of latency (the delay before a data transfer begins after a command has been issued to begin data transfer), provide significantly larger capacity per user, and facilitate greater data and communication privacy for the user.

Significantly, infrared wireless communications with a wavelength beyond 1400 nm are eye-safe since the light at these wavelengths can never reach the retina of the eye, as it is absorbed by a combination of the lens and the liquid vitreous humor inside the eye. Hence, eye safety regulations allow infrared optical beams in free space to carry more power than visible optical beams, which bodes well when it comes to data transmission.

For indoor wireless communications, data-carrying infrared signals are easily steerable. This means that an individual beam can be precisely directed to a single device via an unshared communication link to e.g. provide 128 separate signals carrying up to 112 Gbit s-1 per signal, as shown in Koonen’s lab. In comparison, shared WiFi systems can provide a maximum of 7 Gbit s-1, more than three orders of magnitude less than that of steerable infrared systems.

In their indoor infrared wireless system, beams are carried by optical fibers that originate from a central communication controller (CCC). When the beams reach a room, they are transmitted to intended devices using a ceiling-based pencil-radiating antenna (PRA). However, a drawback with infrared wireless communications is that it requires a clear line-of-sight (LoS) between the PRA and the receiving device, otherwise the beam can’t reach the device. Therefore, multiple PRAs are included to transmit the signal from different directions if there is the absence of LoS.

Energy efficiency in the steering process is ensured by using a passive approach to steer the infrared beams. Such approaches do not require external power, and can provide faster steering speed and are easier to scale-up. One such approach involves tuning the wavelength of the light in combination with wavelength-diffractive functions. The grating is designed to diffract a certain wavelength in a certain direction, where the number of wavelengths, and associated beams, is limited by the tuning range of the laser diode transmitters. 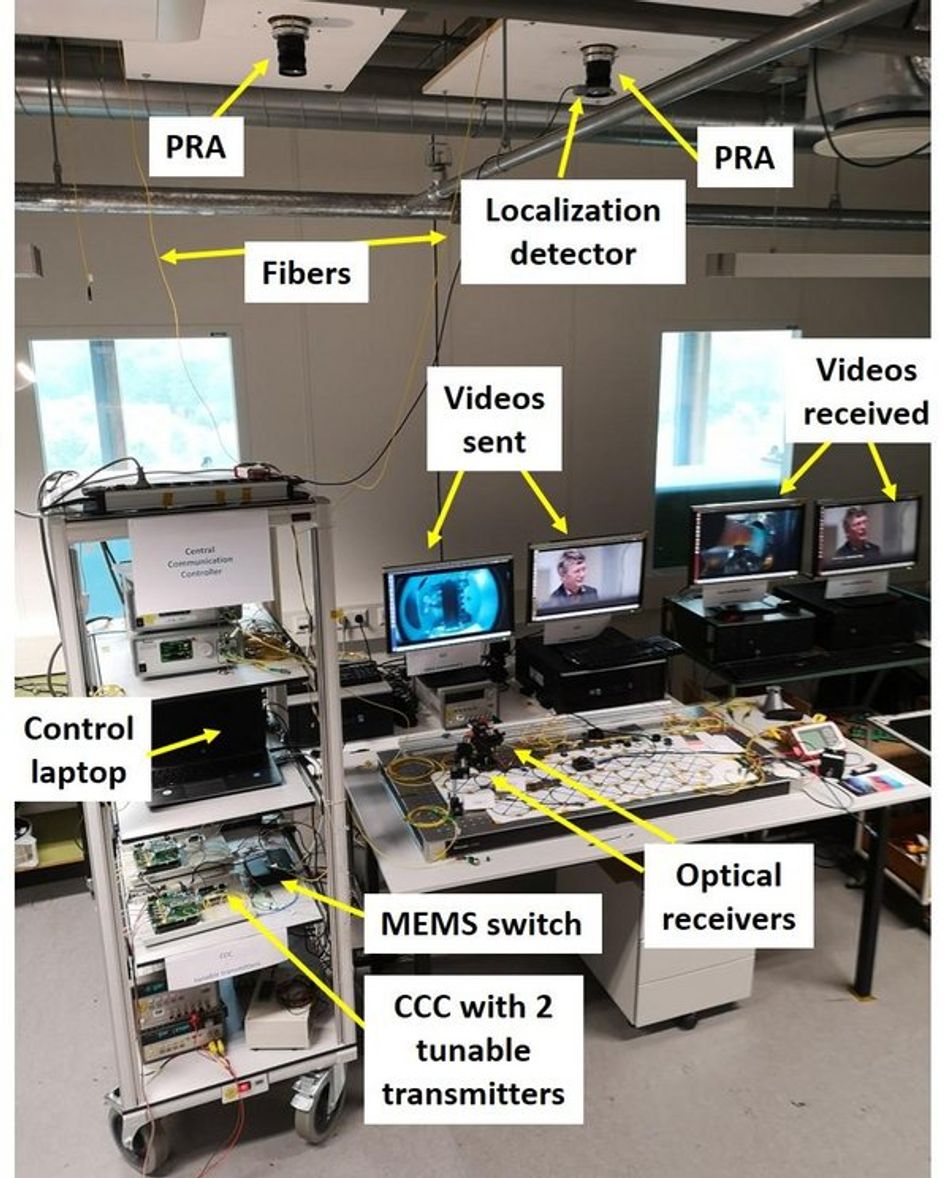 The PRAs may transmit the infrared signals, but an optical receiver is also needed to detect the signal at the device. Koonen and the team have developed an optical receiver based on integrated optics technology. The receiver captures the incoming beam using a grating, which then sends the signal along a waveguide and finally into a high-speed photodiode.

Of course, a beam steering system would be ineffective if it can’t properly locate the position of a user’s device. Therefore, the system needs to collect information about the position of the devices before sending a signal. To facilitate this, the team placed four visible light LEDs around the optical receiver on the device and a camera on the ceiling. Each device is assigned a unique blinking sequence of LEDs, which is recorded by the camera and then analyzed with a Raspberry PI module. Another approach considered by the group involved scanning the user area with a search beam and monitor the reflected light at the PRA.

To demonstrate the feasibility of their system, Koonen and the team built a laboratory set-up consisting of PRAs, localization detectors, optical receivers, and a central communication controller (CCC). Using the system, they demonstrated the real-time transfer of two HD videos from one pair of monitors to another. The video data sets were carried in 10 Gbit s-1 streams. Imperatively, the signal transfer took place with very low latency. To account for any changes in the position of the devices, the researchers included a micro-electrical mechanical system (MEMS) optical cross-connect (OXC) to maintain PRA communication with the devices

A HYBRID SYSTEM: RADIO AND INFRARED

Application of this approach may include wireless settings where instantaneous high-capacity services are needed, highly secure and private communication are required, or cases where there are serious objections with regards to electromagnetic interference. In terms of indoor situations, this approach could be used in residential homes, hospitals, office buildings, conference rooms, museums, waiting lounge at airports, airplanes, in trains or buses, exhibition halls, or shopping malls.