In the photo on the left, a disk of the new insulating material blocks and reflects visible light, hiding the MIT logo beneath it. But seen in infrared light, at right, the material is transparent and the logo is visible. Image courtesy of the researchers

Imagine a device that can sit outside under blazing sunlight on a clear day, and without using any power cool things down by more than 23 degrees Fahrenheit (13 degrees Celsius). It almost sounds like magic, but a new system designed by researchers at MIT and in Chile can do exactly that.

The device, which has no moving parts, works by a process called radiative cooling. It blocks incoming sunlight to keep from heating it up, and at the same time efficiently radiates infrared light — which is essentially heat — that passes straight out into the sky and into space, cooling the device significantly below the ambient air temperature.

The key to the functioning of this simple, inexpensive system is a special kind of insulation, made of a polyethylene foam called an aerogel. This lightweight material, which looks and feels a bit like marshmallow, blocks and reflects the visible rays of sunlight so that they don’t penetrate through it. But it’s highly transparent to the infrared rays that carry heat, allowing them to pass freely outward.

The new system is described today in a paper in the journal Science Advances, by MIT graduate student Arny Leroy, professor of mechanical engineering and department head Evelyn Wang, and seven others at MIT and at the Pontifical Catholic University of Chile.

Such a system could be used, for example, as a way to keep vegetables and fruit from spoiling, potentially doubling the time the produce could remain fresh, in remote places where reliable power for refrigeration is not available, Leroy explains. 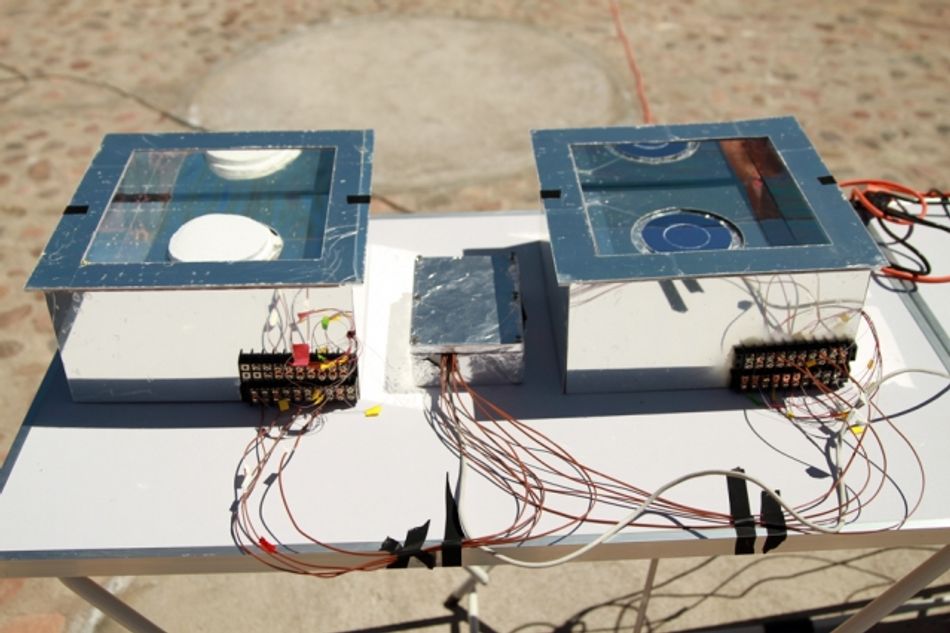 In field tests, the performance of the radiative cooling device was measured under full sunlight, both with the insulating material in place (left) and without it (right).

Radiative cooling is simply the main process that most hot objects use to cool down. They emit midrange infrared radiation, which carries the heat energy from the object straight off into space because air is highly transparent to infrared light.

The new device is based on a concept that Wang and others demonstrated a year ago, which also used radiative cooling but employed a physical barrier, a narrow strip of metal, to shade the device from direct sunlight to prevent it from heating up. That device worked, but it provided less than half the amount of cooling power that the new system achieves because of its highly efficient insulating layer.

“The big problem was insulation,” Leroy explains. The biggest input of heat preventing the earlier device from achieving deeper cooling was from the heat of the surrounding air. “How do you keep the surface cold while still allowing it to radiate?” he wondered. The problem is that almost all insulating materials are also very good at blocking infrared light and so would interfere with the radiative cooling effect.

There has been a lot of research on ways to minimize heat loss, says Wang, who is the Gail E. Kendall Professor of Mechanical Engineering. But this is a different issue that has received much less attention: how to minimize heat gain. “It’s a very difficult problem,” she says.

The solution came through the development of a new kind of aerogel. Aerogels are lightweight materials that consist mostly of air and provide very good thermal insulation, with a structure made up of microscopic foam-like formations of some material. The team’s new insight was to make an aerogel out of polyethylene, the material used in many plastic bags. The result is a soft, squishy, white material that’s so lightweight that a given volume weighs just 1/50 as much as water.

The key to its success is that while it blocks more than 90 percent of incoming sunlight, thus protecting the surface below from heating, it is very transparent to infrared light, allowing about 80 percent of the heat rays to pass freely outward. “We were very excited when we saw this material,” Leroy says.

The result is that it can dramatically cool down a plate, made of a material such as metal or ceramic, placed below the insulating layer, which is referred to as an emitter. That plate could then cool a container connected to it, or cool liquid passing through coils in contact with it, to provide cooling for produce or air or water. 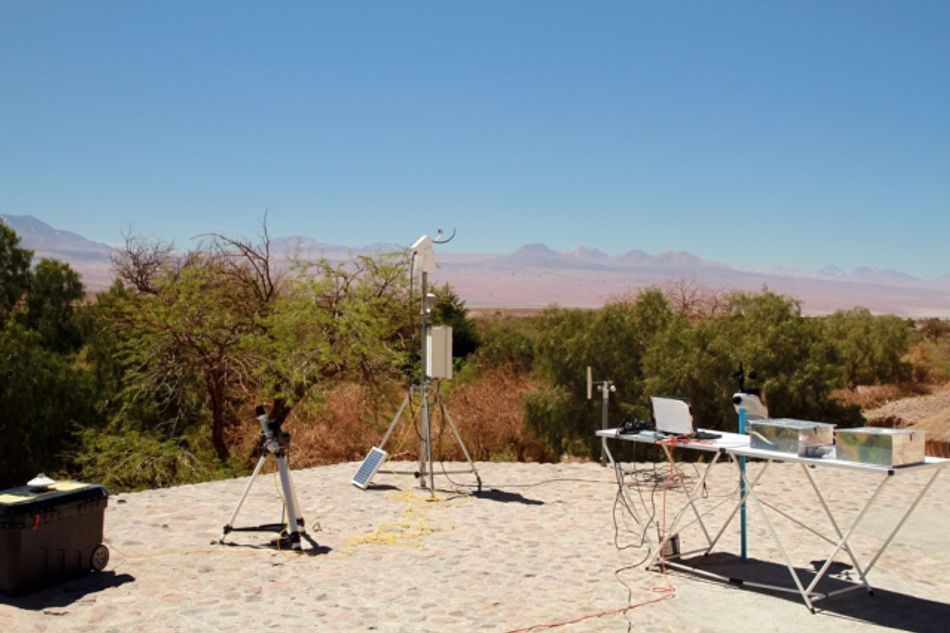 In collaboration with researchers in Chile, the team carried out field tests in the Atacama Desert town of San Pedro, as seen here, as well as in Cambridge, Massachusetts.

Putting the device to the test

To test their predictions of its effectiveness, the team along with their Chilean collaborators set up a proof-of-concept device in Chile’s Atacama desert, parts of which are the driest land on Earth. They receive virtually no rainfall, yet, being right on the equator, they receive blazing sunlight that could put the device to a real test. The device achieved a cooling of 13 degrees Celsius under full sunlight at solar noon. Similar tests on MIT’s campus in Cambridge, Massachusetts, achieved just under 10 degrees cooling.

That’s enough cooling to make a significant difference in preserving produce in remote locations, the researchers say. In addition, it could be used to provide an initial cooling stage for electric refrigeration, thus minimizing the load on those systems to allow them to operate more efficiently with less power.

Theoretically, such a device could achieve a temperature reduction of as much as 50 C, the researchers say, so they are continuing to work on ways of further optimizing the system so that it could be expanded to other cooling applications such as building air conditioning without the need for any source of power. Radiative cooling has already been integrated with some existing air conditioning systems to improve their efficiency.

Already, though, they have achieved a greater amount of cooling under direct sunlight than any other passive, radiative system other than those that use a vacuum system for insulation — which is very effective but also heavy, expensive, and fragile.

This approach could also be a low-cost add-on to any other kind of cooling system, providing additional cooling to supplement a more conventional system. “Whatever system you have,” Leroy says, “put the aerogel on it, and you’ll get much better performance.”

Peter Bermel, an associate professor of electrical and computer engineering at Purdue University, who was not involved in this work, says, “The main potential benefit of the polyethylene aerogel presented here may be its relative compactness and simplicity, compared to a number of prior experiments.”

He adds, “It might be helpful to quantitatively compare and contrast this method with some alternatives, such as polyethylene films and angle-selective blocking in terms of performance (e.g., temperature change), cost, and weight per unit area. … The practical benefit could be significant if the comparison were performed and the cost/benefit tradeoff significantly favored these aerogels.”