The programmable surface, called a metasurface, allows engineers to control and focus transmissions in the terahertz band of the electromagnetic spectrum. Image by Sengupta et al.

The programmable surface, called a metasurface, allows engineers to control and focus transmissions in the terahertz band of the electromagnetic spectrum. Terahertz, a frequency range located between microwaves and infrared light, can transit much more data than current, radio-based wireless systems. With fifth generation (5G) communications systems offering speeds 10 to 100 times faster than the previous generation, demand for bandwidth is ever increasing. Facing the emergence of technologies such as self-driving cars and augmented reality applications, the terahertz band presents an opportunity for engineers seeking ways to increase data transmission rates. 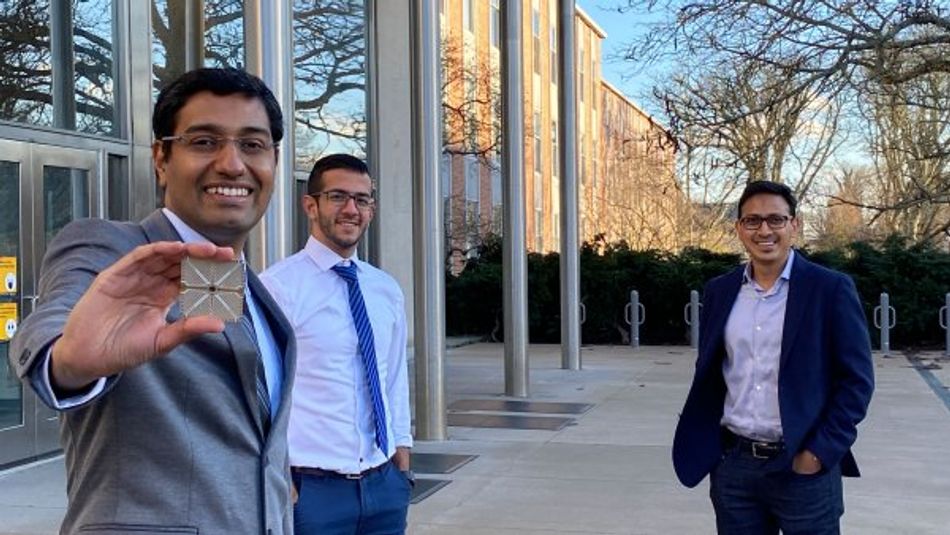 Suresh Venkatesh, a postdoctoral research associate, Hooman Saeidi, a graduate student, and Kaushik Sengupta, associate professor of electrical engineering, have developed a device that focuses and directs terahertz waves for use in high-speed communications. Photo by Aaron Nathans

To harness the expanded space in the terahertz band, engineers will need to overcome some challenges, and that is where the metasurface comes in. Unlike radio waves, which easily pass through obstructions such as walls, terahertz works best with a relatively clear line of sight for transmission. The metasurface device, with the ability to control and focus incoming terahertz waves, can beam the transmissions in any desired direction.  This can not only enable dynamically reconfigurable wireless networks, but also open up new high-resolution sensing and imaging technologies for the next generation of robotics, cyberphysical systems and industrial automation. Because the metasurface is built using standard silicon chip elements, it is low-cost and can be mass produced for placement on buildings, street signs and other surfaces.

"A terahertz beam would be like a laser pointer, whereas today's radio wave transmitters are like light bulbs that send light everywhere. A programmable metasurface is one that produces any possible fields; it’s the ultimate projector," said Kaushik Sengupta, an associate professor of electrical engineering at Princeton and a lead author of a new study in reporting the results. Sengupta, whose research focuses on integrated chip-scale systems across radio waves, terahertz to optical frequencies, said the metasurface’s low production cost and its programmability means it could be “a major enhancer for communications and network capabilities.”

In a study published Dec.14 in Nature Electronics, researchers from Sengupta’s Integrated Micro-systems Research Lab described the design of the metasurface, which features hundreds of programmable terahertz elements, each less than 100 micrometers (millionths of a meter) in diameter and a mere 3.4 micrometers tall, made of layers of copper and coupled with active electronics that collectively resonate with the structure. This allows adjustments to their geometry at a speed of several billions of times per second. These changes — which are programmable, based on desired application — split a single incoming terahertz beam up into several dynamic, directable terahertz beams that can maintain line of sight with receivers.

The Princeton researchers commissioned a silicon chip foundry to fabricate the metasurface as tiles onto standard silicon chips. In this way, the researchers showed that the programmable terahertz metasurface can be configured into low-cost, scalable arrays of tiles. "The tiles are like Lego blocks and are all programmable," said Sengupta. As a proof of concept, the Princeton researchers tested tile arrays measuring two-by-two with 576 such programmable elements and demonstrated beam control by projecting (invisible) terahertz holograms.These elements are scalable across larger arrays.

One possible way to incorporate these sorts of flat tiles into the built environment as next-generation communications network components would be to plaster them as a sort of "smart surface" wallpaper, Sengupta said,

Daniel Mittleman, a professor of engineering at Brown University who was not involved in the study, commented that the research represents a significant step toward terahertz communications.

"This new work demonstrates a fascinating approach which, unlike most previous efforts, is scalable into the terahertz range," said Mittleman. "The key takeaway is that we are now getting a handle on practical methods for actively controlling the wave front, beam size, beam direction, and other features of terahertz beams."

Numerous other applications for the technology include gesture recognition and imaging, as well as industrial automation and security. Another potential application is autonomous or self-driving cars. These vehicles require precise sensing and imaging to make sense of the external world in real time, and ideally even faster than a human driver. Semi-autonomous cars increasingly sold today use 77 GHz radars to detect pedestrians and other vehicles for the purposes of adaptive cruise control and engaging automatic emergency braking. For full, driverless autonomy, though, cars would benefit by "seeing" the road and obstacles better with terahertz-band sensors and cameras, along with being able to communicate with other vehicles more rapidly.

Looking ahead, the programmable metasurfaces will need further development, Sengupta said, to be integrated as components in innovative, next-generation networks.

"There are so many things that people would like to do that are not possible with current wireless technology," said Sengupta. "With these new metasurfaces for terahertz frequencies, we're getting a lot closer to making those things happen."

Many connected devices, films downloaded in seconds, autonomous driving: the extremely fast 5G should make all this possible. The problem is that the fastest form of 5G now requires very fast connections within the network, which only works at short distances.