Embry-Riddle graduate student Jonathon G. Nadeau tweaks a part on a prototype based on a concept from Michael Dupuis of NASA’s Kennedy Space Center that would leverage solar propulsion to clean up space debris. (Photo: Embry-Riddle/David Massey)

More than 27,000 pieces of orbital debris currently litter space, NASA has reported. In low Earth orbit, space junk can travel up to 15,700 miles per hour, creating serious hazards for spacecraft and astronauts.

To clean up some of that junk, Embry-Riddle student researchers Ankit Rukhaiyar and Jonathon G. Nadeau created a prototype technology that would use nearly infinite solar energy to autonomously sail around low Earth orbit aboard a cube satellite (CubeSat), nabbing garbage. 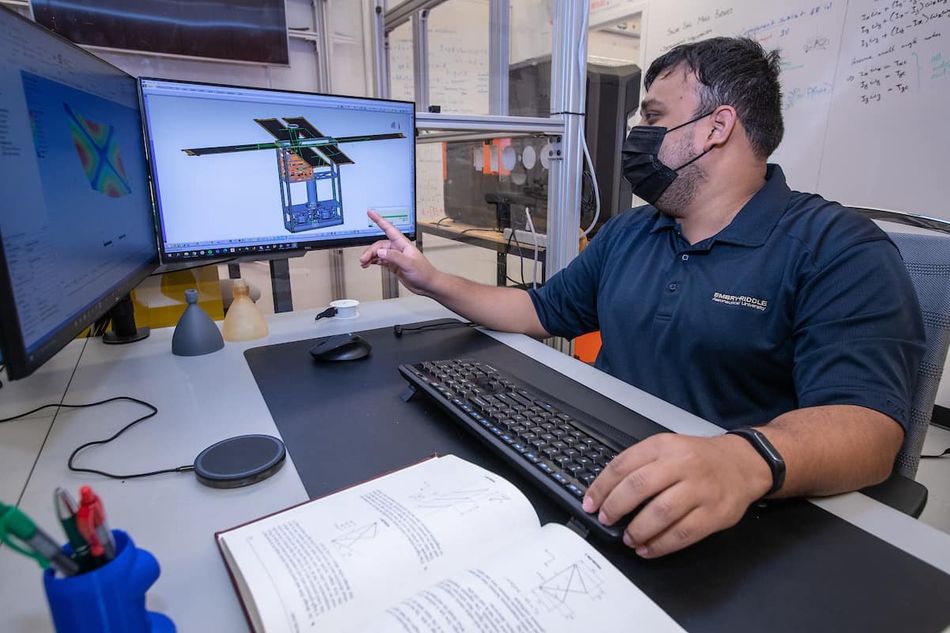 “There is a big problem with space debris,” said EPPL Director Dr. Sergey Drakunov, professor of Engineering Physics. “We want to get a spacecraft into the space debris field, capture an object using robotics and leverage solar pressure radiation to bring that junk to a lower altitude, so that it can de-orbit by itself.”

A fleet of CubeSats with deployable solar sails could cruise around in space, autonomously conducting long-term missions, Rukhaiyar said. “Because they are propelled by solar radiation, the cleanup technology would not require fuel and it’s only limited by the survivability of the hardware components,” he explained. “At the end of its mission life cycle, with the sail deployed, the CubeSat could re-enter the atmosphere and burn up, thus preventing it from becoming space junk itself.”

Radiation pressure from the sun would speed up or slow down the CubeSat’s orbit, depending on whether the sail faces toward or away from the sun. “You would keep switching modes to bring debris down to about 300 kilometers above the Earth, where atmospheric drag would burn it up,” said Rukhaiyar, who recently earned his master’s degree and will soon become a Ph.D. student at Embry-Riddle. “Radiation pressure is pretty much constant on Earth, so we should have enough radiation pressure to complete long-term cleanup missions.”

Solar power “makes it possible to increase the spacecraft’s orbit for free, without using the fuel,” Drakunov noted. Heavy spacecraft must otherwise be launched into orbit using large amounts of expensive fuel.

Embry-Riddle’s prototype version, intended for technology demonstrations, uses a small (6U) CubeSat and a 32-meter sail. In tests, the prototype solar sail unfurled efficiently and as expected. Rukhaiyar and Nadeau worked with other students to painstakingly test their designs, which were informed by NASA concepts.

Now, researchers have a goal to increase the speed of the technology and standardize the manufacturing of ding-proof sails. 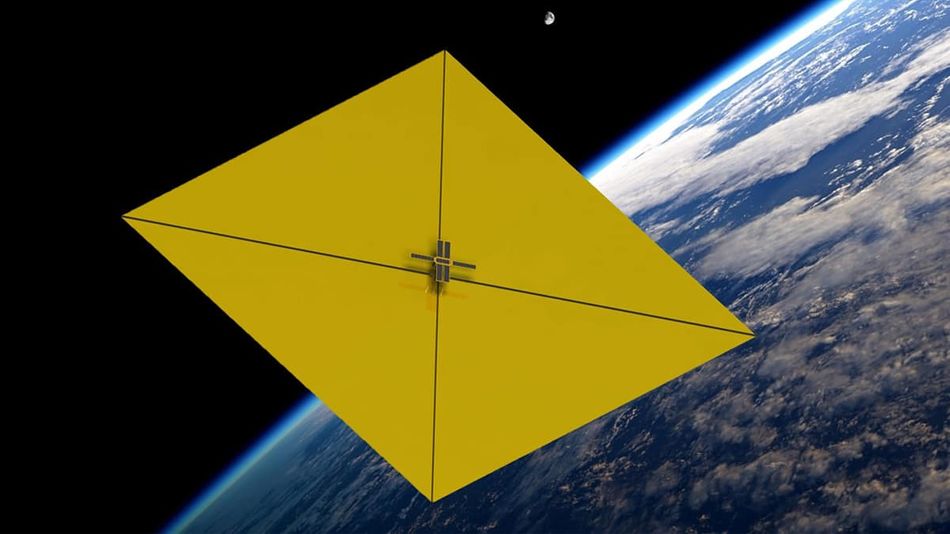 A solar-powered sail that deploys during its orbit around the Earth in order to catch space debris is pictured here. (Photo: Embry-Riddle)

While solar power is at the heart of the invention, Drakunov said that student power was the real key to success. “Students like Ankit and Jonathon come to Embry-Riddle with all their enthusiasm and they do great things,” he said. “They took an idea from NASA and they tested and tested it. During the pandemic, they had to work in masks and separated from others. Their hard work will advance space technology, and they are also helping to inspire another generation of student researchers.”

Debut novelist (City in a Forest). Assistant Vice President in a higher education setting. Highly skilled in research communications, writing a broad range of content, editing, and media relations. Strong media and communications professional with a Master of Fine Arts (MFA) from Queens University a...

Headed to the Red Planet with the Perseverance rover, the pioneering helicopter is powered up for the first time in interplanetary space as part of a systems check.

The findings by rover scientists highlight the diversity of samples geologists and future scientists associated with the agency’s Mars Sample Return program will have to study.