The soft robotic exosuit (shown here from the side) was worn by stroke patients on the hemiparetic side of their bodies. By assisting during the stance and swing phases of their gait cycles, it enabled them to walk faster and farther on a 30-meter walkway. Credit: Rolex Awards/Fred Merz

Stroke is the leading cause of serious long-term disability in the US with approximately 17 million individuals experiencing it each year. About 8 out of 10 stroke survivors suffer from “hemiparesis,” a paralysis that typically impacts the limbs and facial muscles on one side of their bodies, and often causes severe difficulties walking, a loss of balance with an increased risk of falling, as well as muscle fatigue that quickly sets in during exertions. Oftentimes, these impairments also make it impossible for them to perform basic everyday activities.

To allow stroke patients to recover, many rehabilitation centers have looked to robotic exoskeletons. But although there are now a range of exciting devices that are enabling people to walk again who initially were utterly unable to do so, there remains significant active research trying to understand how to best apply wearable robotics for rehabilitation after stroke. Despite the promise, recent clinical practice guidelines now even recommend against the use of robotic therapies when the goal is to improve walking speed or distance.

In 2017, a multidisciplinary team of mechanical and electrical engineers, apparel designers, and neurorehabilitation experts at Harvard’s Wyss Institute for Biologically Inspired Engineering and John A. Paulson School of Engineering and Applied Sciences (SEAS), and Boston University’s (BU) College of Health & Rehabilitation Sciences: Sargent College showed that an ankle-assisting soft robotic exosuit, tethered to an external battery and motor, was able to significantly improve biomechanical gait functions in stroke patients when worn while walking on a treadmill. The cross-institutional and cross-disciplinary team effort was led by Wyss faculty members Conor Walsh, Ph.D. and Lou Awad, P.T., D.P.T., Ph.D, together with Terry Ellis, Ph.D., P.T., N.C.S. from BU.

Now, the same team took a critical step forward in translating their technology towards a rehabilitation strategy. Using an untethered version of the exosuit that carries its own battery and motor, they showed in a cohort of six post-stroke survivors with hemiparesis that their device could significantly increase individuals’ walking speed by an average 0.14 meters per second, with one individual walking as much as 0.28 meters per second faster. These same individuals, when asked to walk as far as they can in 6 minutes, were able to go 32 meters farther, on average, with one person traveling over 100 meters farther. These findings are published in IEEE Open Journal of Engineering in Medicine and Biology (OJEMB).

“The vast majority of people who have had a stroke walk slowly and cannot walk very far. Faster and farther walking after physical therapy are among the most important outcomes desired by both patients and clinicians. If neither speed nor distance are changed by a therapy, it would be difficult to consider that therapy to be effective,” said Wyss Institute Associate Faculty member Lou Award, the study’s first author who co-corresponded the findings to IEEE OJEMB together with Walsh. “The levels of improvement in speed and distance that we found in our exploratory study exceeded our expectations for an immediate effect without any training and highlight the promise of the exosuit technology.” Awad also is Assistant Professor at BU’s College of Health and Rehabilitation: Sargent College and Director of the Neuromotor Recovery Laboratory.

The vast majority of people who have had a stroke walk slowly and cannot walk very far. Faster and farther walking after physical therapy are among the most important outcomes desired by both patients and clinicians. If neither speed nor distance are changed by a therapy, it would be difficult to consider that therapy to be effective.

The exosuit deployed in this study weighs less than five kilograms and targets the limbs of stroke survivors during distinct phases of the gait cycle. Fully mobile, it is powered by a battery and initiated by an actuator unit both worn at the hips. It delivers mechanical power to the ankles via a cable-based mechanism, whereby the cables and other parts of the exosuit are anchored to the body by lightweight functional textiles. Adding further to its low weight and potential to reduce gait asymmetries is the fact that patients wear it only on the impaired paretic side, unlike rigid exoskeleton systems – many of which need to be worn on both sides. 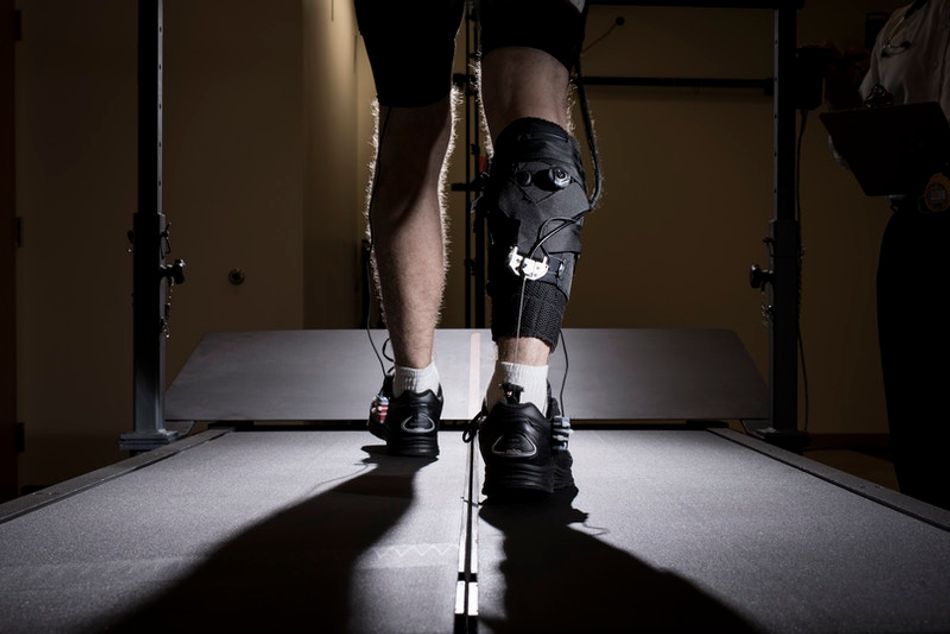 The fully mobile exosuit (shown here from behind) weighs less than five kilograms and targets the paretic limb of stroke survivors during distinct phases of the gait cycle. It is powered by a battery and controlled by an actuator unit both worn at the hips, and delivers mechanical power to the ankles via cables that are anchored to the body by lightweight functional textiles: Credit: Rolex Awards/Fred Merz

Walsh’s team designed the exosuit to assist with plantar flexion, the ankle movement that pushes the foot down into the ground during the stance phase of the gait cycle, and with dorsiflexion, in which the foot is lifted up and the toes pulled toward the shin during the swing phase. Both these movements are variably impaired in post-stroke hemiparetic walking, and survivors often exhibit a “drop foot”, an inability to raise the foot from the ankles. Walsh, whose group has pioneered and broadly validated soft exosuit technology over the last years, is also the Gordon McKay Professor of Engineering and Applied Sciences at SEAS, and the Founder of the Harvard Biodesign Lab.

To demonstrate broad applicability for their approach in stroke survivors with hemiparesis, the team focused on six hemiparetic individuals with varying severities and types of impairments that were all entered a chronic phase. After an initial clinical assessment of patients, and adjustments of the exosuit to individuals, the researchers performed a series of tests on a 30-meter walkway. Wearing the exosuit unpowered did not cause any disadvantages with regards to participants walking speeds, distances, or energy costs compared to when they were not wearing the exosuit. When the exosuit was then powered on, “we saw important and immediate improvements in walking speed and distance which are meaningful outcomes that make a real difference in everyday lives of individuals who have sustained a stroke. It’s these kind of clinically meaningful outcomes that stimulate excitement among physical therapists and others in the rehabilitation community,” said co-author Ellis, Director of the Center for Neurorehabilitation at Sargent College and Associate Professor and Chair of Physical Therapy at BU.

It’s these kind of clinically meaningful outcomes that stimulate excitement among physical therapists and others in the rehabilitation community.

“Our engineering and clinical teams at Harvard and Boston University are highly motivated by these results to refine the technology and study its immediate impact in stroke survivors with a wide range of walking abilities. We are also eager to explore therapeutic applications in both clinical settings and day-to-day walking in the home and community,” said Awad.

“This study by the team beautifully shows how exosuit technology developed at the Wyss Institute and its partners could make a real difference in the lives of many stroke survivors, and it is a compelling demonstration of how the Institute’s translation model rapidly creates and drives new solutions to some of our major health problems that can change the lives of patients for the better,” said Wyss Institute Founding Director Donald Ingber, M.D., Ph.D., who is also the Judah Folkman Professor of Vascular Biology at Harvard Medical School and the Vascular Biology Program at Boston Children’s Hospital, as well as Professor of Bioengineering at SEAS.

Alexey Ledyukov, a student at ITMO’s Faculty of Control Systems and Robotics, has designed an exoskeleton that will be able to help lift up to 80 kilograms easily. At the same time, the suit itself doesn’t weigh much: you can move and even run in it freely.