Imagine a small, inexpensive device that could look at a parking lot to see which spaces are filled and which are not. Or one that could find traffic jams and reroute others away from it. Maybe such a device could even keep an eye out for dangerous situations in public places. Brandon Lucia, assistant professor of electrical and computer engineering, along with his Ph.D. student Harsh Desai and collaborators from the University of Trento in Italy, imagined a device like this, and they named it Camaroptera, after a tiny, industrious bird.

Camaroptera is a battery-less remote image sensor powered completely by solar panels and capable of wirelessly transmitting images over kilometers, even in a crowded city environment. Camaroptera collects images and processes them through what is known as edge computing. Edge computing is when a sensor device performs data analysis by itself, instead of spending large amounts of time and energy to send the data to a far-away cloud server for processing. Using edge computing, Camaroptera applies machine learning to the images it collects. Based on the machine learning results, the device can send the interesting images over a radio while disregarding uninteresting data, saving the energy that would have been used to send it.

“The magic of Camaroptera is that it can operate independently and over large geographic areas. The device can collect images in remote areas, and then process the images locally,” Lucia said. “One of the benefits of doing computation locally is that it avoids using the radio. From an energy perspective, it's very expensive to use the radio.” 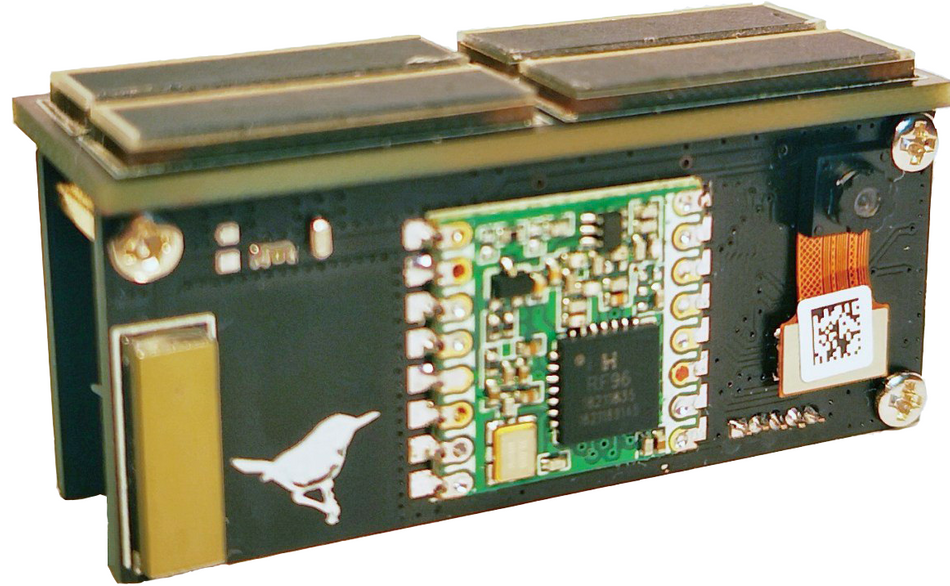 So, how should the device manage its energy? Some must be spent collecting data, some computing, and some sending data over the radio. Plus, it needs to find time to sit idle and harvest energy. When should it do each of these tasks? Faced with this question, Lucia and Ph.D. student Kiwan Maeng created a new algorithm and system for scheduling how an energy-harvesting device uses its time and energy.

The device must ensure that every application has its needs met in a timely manner, and the device must never run out of energy. If, for example, it was a cloudy day, it would be difficult for the device to harvest solar energy. As a result, it wouldn’t have enough energy to complete the tasks it usually does. The scheduling algorithm can correct for that. Instead of having the device perform a complex energy-intensive task, it can perform a simpler one.

“If you can't meet the original specification for what the system is supposed to do, you can do something that remains useful under the limited amount of resources that are available,” Lucia said. “The device gets worse in a predictable and controlled way.”

One of the other benefits of devices like Camaroptera is that they are less expensive than a traditional device that performs the same function. Lucia’s devices are cheap to build, cheap to deploy, and cheap to maintain.

“If you were going to use this to monitor civil infrastructure, it'd be really cheap because you could manufacture them in large quantities,” Lucia said. “An important benefit of energy-harvesting is the elimination of the device maintenance cost. We can’t have someone driving around replacing 100,000 batteries in cameras all over town once a year.”

This project is a part of the Computing on Network Infrastructure for Pervasive Perception, Cognition, and Action (CONIX) Research Center. Lead by Carnegie Mellon University, CONIX is a multidisciplinary effort to create the architecture for networked computing that lies between edge devices and the cloud, allowing future IoT applications to be hosted with guaranteed performance, security, robustness, and privacy. It includes researchers from six U.S. universities and is funded by the SRC’s Joint University Microelectronics Program (JUMP), representing a consortium of industrial participants and the Defense Advanced Research Projects Agency (DARPA).

EPFL will soon be home to a European hub for high-performance computing focused on fusion power – a potential source of clean, risk-free energy. As part of this effort, EPFL’s Swiss Plasma Center will lead a campus-wide, cross-disciplinary research team.

A team from MIT CSAIL recently developed a clever work-around: a compiler plug-in called Enzyme that allows you to import arbitrary foreign code into systems like TensorFlow without having to rewrite it.