The companies Diehl and HENSOLDT carried out flight tests in July and August 2019 together with the German Aerospace Center (Deutsches Zentrum für Luft- und Raumfahrt; DLR) on a new sensor system to increase air safety.

The companies Diehl and HENSOLDT carried out flight tests in July and August 2019 together with the German Aerospace Center (Deutsches Zentrum für Luft- und Raumfahrt; DLR) on a new sensor system to increase air safety. The idea is to prevent collisions between aircraft. In future, the sensors tested for detecting and avoiding collisions (‘Sense and Avoid’) could enable the approval and operation of unmanned aerial systems (‘drones’) in German airspace for the first time.

In a three-week-long flight test campaign at Braunschweig research airport, it was demonstrated that modern sensors can replace the pilot’s eye in flight tests carried out for more than 30 hours. For this purpose, the DLR research aircraft Dornier Do 228 was equipped with a ‘dual-mode sensor suite’ manufactured by Diehl and HENSOLDT, consisting of radar and electro-optical sensors. The optical signals of special cameras were combined with radar signals. In addition to DLR’s Do 228, one more research aircraft was used for the tests. This aircraft made extensive manoeuvres from different directions and heights and had to be detected by the sensor system on the Do 228. It was found in the flight tests that the sensor suite detected the other aircraft, even at long distances, in a reliable, accurate manner, tracked it precisely, and could warn its own aircraft of a potential collision course sufficiently early.

The electro-optical module from Diehl consists of a series of high-resolution cameras that scan the area in front of as well as the to the side of the aircraft. It was demonstrated that this system can replace the pilot’s view and significantly increases the accuracy of the overall system. The module is lightweight and compact and can be flexibly modified to meet the requirements of different aircraft. 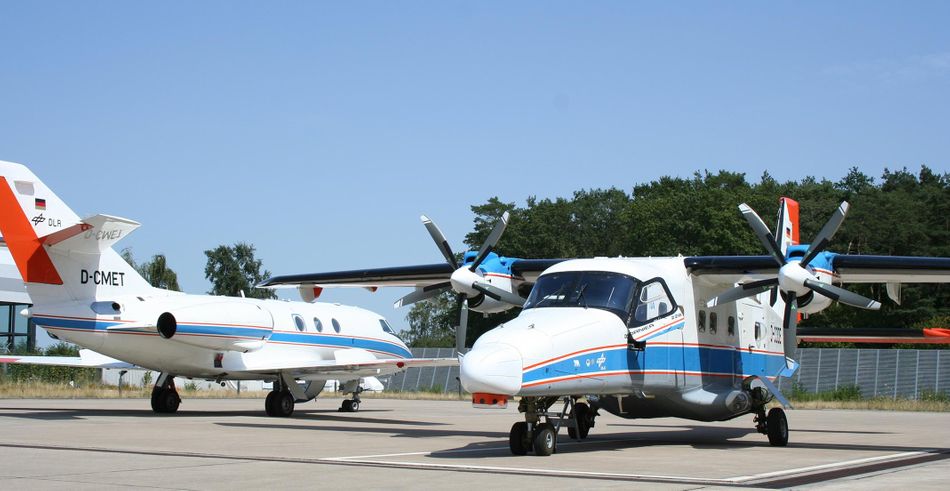 The ‘Detect-and-Avoid’ radar made by HENSOLDT employs electronic beam steering technology (Active Electronically Scanned Array, AESA). This allows several detection tasks to be performed simultaneously and objects to be detected extremely quickly. Thanks to radar technology, the flight direction of objects in one’s own flight path can be measured precisely so as to be warned about potential collisions in a timely manner. With its unique detection properties, the multi-functional radar is suitable for military as well as civilian drones – for example, for cargo delivery. In addition, the sensor also performs all the functions of a weather radar. The combination of these two technologies (dual-mode sensor system) is suitable for unmanned aerial vehicles of different sizes and also has excellent detection properties.

The universal DLR research aircraft is regularly equipped and used as a flying platform for a wide variety of research tasks. For the research into unmanned aerial systems, it serves as a ‘National Sense and Avoid Demonstrator’. Using a new type of digital autopilot, the aircraft can be automatically controlled from a ground station. It can safely simulate an unmanned aerial system, because two safety pilots are always on board the aircraft. The flight tests were conducted as part of the ‘Project Sense and Avoid - national’ (ProSA-n) project, which has been commissioned by the Federal Office of Bundeswehr Equipment, Information Technology and In-Service Support (Bundesamt für Ausrüstung, Informationstechnik und Nutzung der Bundeswehr; BAAINBw).

Stanford engineers investigated how people’s moods might affect their trust of autonomous products, such as smart speakers. They uncovered a complicated relationship.

New approach could spark an era of battery-free ocean exploration, with applications ranging from marine conservation to aquaculture.

It's important that self-driving cars quickly detect other cars or pedestrians sharing the road. Researchers at Carnegie Mellon University have shown that they can significantly improve detection accuracy by helping the vehicle also recognize what it doesn't see.