Like most major U.S. cities, Detroit has a problem lurking beneath its streets—an outdated water and sewer pipeline system in need of replacement or a safe means of extending its lifespan.

University of Michigan researchers are collaborating with the Great Lakes Water Authority (GLWA) and engineering firm Structural Technologies on a pilot project in the Motor City that harnesses the power of smart infrastructure sensors and innovative lining technologies. That combination could bolster the structural integrity of water pipelines and alert the utility ahead of line ruptures that can leave residents without service and cost municipalities millions.

“Our research focuses on finding cost effective ways to identify when aging infrastructure systems are showing signs of breakdown,” said Jerome Lynch, chair of U-M’s Department of Civil and Environmental Engineering, and director of the Laboratory of Intelligent Systems Technology. “If we can do that successfully, we’re able to identify distress before failure occurs.

“That way, the data can lead us to more cost effective intervention strategies.”

In early August, GLWA crews installed a liner inside a block-long section of pipeline a few miles east of Detroit’s main downtown area. Created by Structural Technologies, the liner is made of both steel reinforced polymer and mortar composites, adding additional structural capacity and increasing pipeline durability.

At the same time, GLWA crews worked with U-M advisors to install the 17 channels that measure a trio of factors:

This particular section of pipeline offers an example of what cities around the world are dealing with. Made of cast iron, the pipe was installed in 1913—the same year Ford began producing its Model T on an assembly line, and one year prior to the start of World War I. 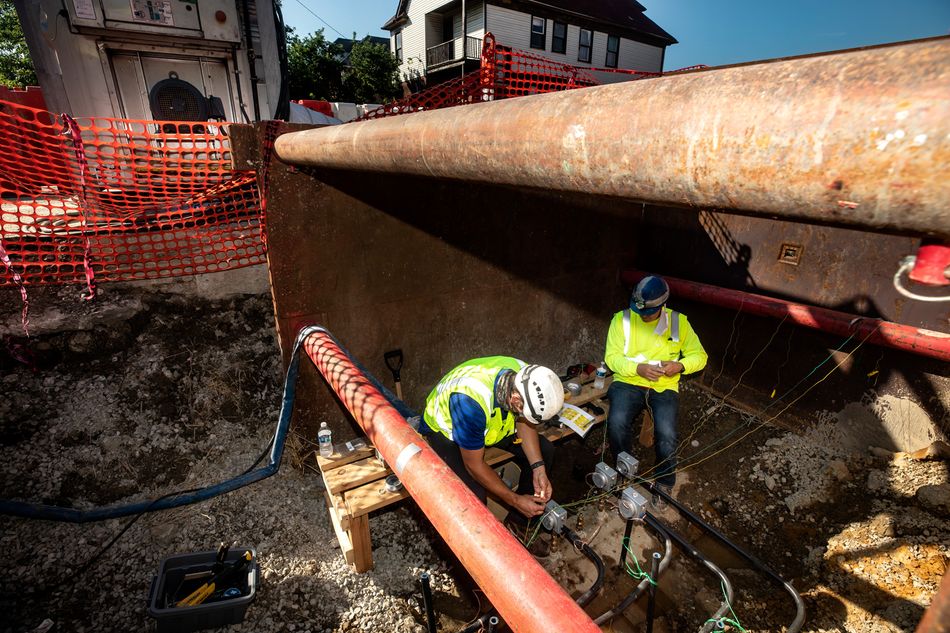 In June 2019, Detroit officials announced a five-year, $500 million replacement program for water and sewer pipes throughout the city. It represents the first major upgrade to the system in roughly 90 years.

And over the next 25 years, as much as $1 trillion in funding for drinking water will be needed to maintain current services and expand them as needed, according to the American Water Works Association.

Line replacement is a daunting task for any city for a host of reasons: from service interruptions to traffic foul-ups caused by work along busy streets. Addressing large sections of a municipal system in a short period of time is financially impossible for most cities. That means identifying problem areas is key to infrastructure replacement moving forward.

“GLWA is committed to innovation at all levels of the organization to ensure system reliability,” said John Norton, GLWA’s director of energy, research and innovation. “Pilots like this with the University of Michigan help us as we work to understand and address potential failures in our water distribution system before they occur.

“Our overarching goal is to understand and improve our ability to select the proper technologies so we can maintain, and even improve, the level of service we provide to the people we serve in southeast Michigan.”