Scientists from ITMO’s School of Physics and Engineering suggest a quicker and more efficient method – microfluidic synthesis of metal-organic frameworks using chips. Potentially, it can be used for targeted drug delivery.

Nowadays, metal-organic frameworks (MOFs) are actively studied and used for cleaning and detection purposes, as well as for recording and storage of data. For the most part, they’re synthesized using conventional methods, which require lots of resources. As an alternative, scientists from ITMO’s School of Physics and Engineering suggest a quicker and more efficient method – microfluidic synthesis of metal-organic frameworks using chips. Potentially, it can be used for targeted drug delivery.

The future of controlled synthesis

Microfluidics is a chemical synthesis method based on the control of fluid flows at micro- and nano-scale. Instead of conventional flasks, scientists use chips several square centimeters in size, on the substrate of which there are communicating channels and chambers. By changing the fluid flow, one can control reactions that occur during synthesis.

Due to the fact that the synthesis occurs at micro- and nano-scale, the ratio of the contact area of the reagents to the reaction mixture increases and the reaction takes place faster. In addition, it’s easier to control the process on a small chip: for example, when scientists need to raise the temperature, it’s easier to heat the substrate than a large vessel. Plus, if you arrange the channels correctly, the mixture will separate or mix at the right time by itself. It’s also convenient to store: once the chamber in which the reaction takes place is created, one can add branches and then the product will fill compartments, inside of which it won’t interact with the reagents and the reaction mixture.

In addition to this, the channels and chambers on the microfluidic chip are sealed – that is, the reaction mixture doesn’t interact with the external environment. This not only makes it possible to obtain a clean product but also guarantees the safety of the researcher.

Detectors of physical and optical parameters can also be embedded in a microfluidic chip. For example, one can focus the laser beam on a channel located next to the reaction chamber and measure the luminescence activity of the product or the size of the resulting particles.

“The microfluidic synthesis method is very promising. Its advantages help us overcome the obstacles found in the conventional approach. For example, the process becomes quicker by several times. And that’s just what we’ve already shown, but there’s much more to study and prove,” says Irina Koryakina, the paper’s first author and a PhD student and junior researcher at the School of Physics and Engineering. 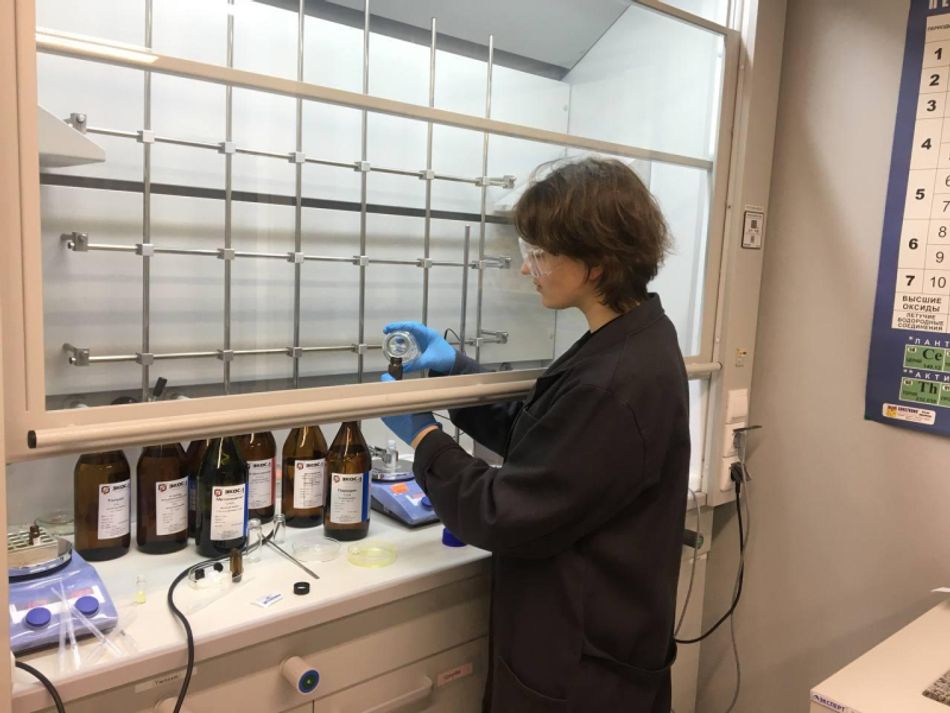 Preparation for solvothermal analysis conducted at the chemistry lab of ITMO’s School of Physics and Engineering. Photo courtesy of Irina Koryakina

Metal-organic frameworks have been studied at ITMO’s School of Physics and Engineering for a long time. These materials are popular among scientists due to their porous nature. They are used in water purification – thanks to the increased activity, particles interact with dirt molecules faster and thus are more efficient.

The most common method by which MOFs are studied consists of adjusting the diameter of the pores and the size of the active surface area. This helps find the optimal parameters at which the particles can carry various substances, such as fluorescent proteins, on their surface.

Usually, when talking about the functionality of MOFs, specialists mention their defects – the absence of certain bonds on the surface of the material. There are more and more studies on this topic nowadays; ITMO scientists, too, are looking into it.

“At the School of Physics and Engineering, MOFs are usually synthesized using conventional methods, so we thought that it would be interesting to improve this approach and decided to go for microfluidics. We went with one of the most popular and easy approaches – continuous flow synthesis,” says Irina Koryakina. 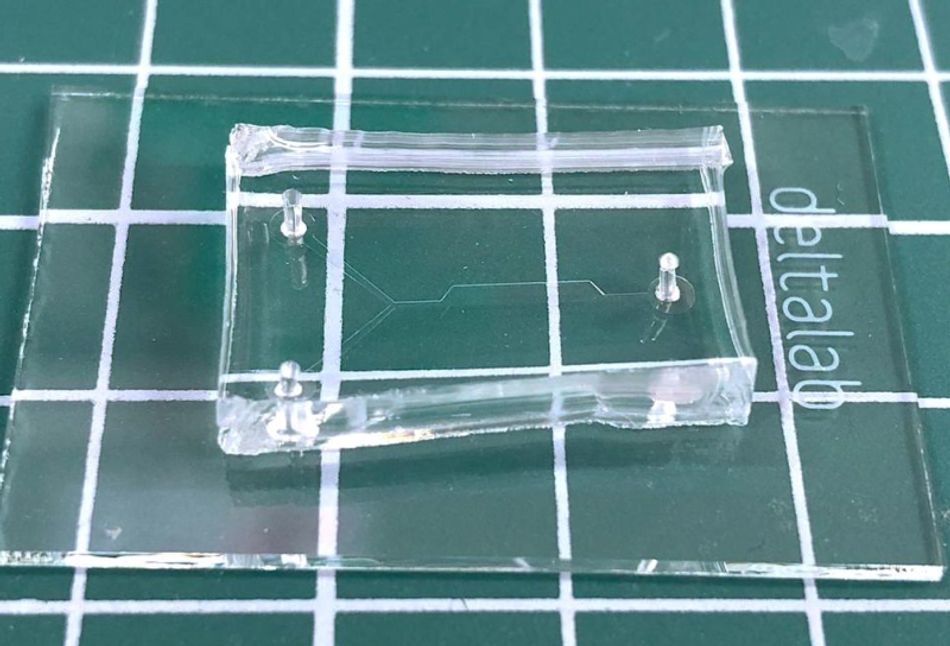 The scientists compared two methods for MOF synthesis: microfluidic and solvothermal, a conventional one. The latter involves mixing the reagents and heating the mixture in a sealed vessel. Typically, the synthesis of MOFs using this method takes 72 hours, while the synthesis on a microfluidic chip takes about one minute. Also, the microfluidic method made it possible to obtain more defective nanoparticles of the material.

The researchers conducted experiments at 0, 22, 50, 70, 90 and 110°C. X-ray diffraction analysis (used to study the internal structure of particles), scanning electron microscopy (particle shape), and BET analysis (particle porosity) showed that nanoparticles with the most optimal properties are formed at room temperature: they have high porosity and more neatly-shaped icosahedrons. The formation of particles begins with the appearance of “seeds”; if the temperature is raised, they don’t have time to ripen and thus stick together, forming large agglomerates. There is no need for extreme conditions for the synthesis of nanoparticles obtained by the scientists, which makes it easier to scale up the production.

“We wanted to accelerate the synthesis, apply the new method, and see how it would go, but after analyzing the resulting product, we realized the particles are more prone to defects. Then, we decided to see if these defects can somehow be made useful. Research showed that they can – for example, they might work for remotely controlled delivery of substances to a cell,” says Irina Koryakina.

To test their hypothesis, the authors of the paper conducted experiments on the toxicity of the obtained MOFs. To do this, they adsorbed fluorescent labels (cyanine 5 and rhodamine B) onto the surface of the particles and then placed the material inside melanoma cells of mice to see if a living organism could withstand the presence of MOFs inside it. The cells were resistant to the new material while its concentration remained at less than 25 particles per organism. This means that the synthesized nanoparticles could potentially be used for targeted drug delivery.

But how do you remotely control the release of the drug? For this, the particles in the cell are irradiated with a green laser (wavelength – 532 nm), which destroys the bonds that attach the chemical compound to the icosahedrons’ surface and releases the fluorescent labels.

A schematic illustration of MOFs synthesis and analysis. First, the researchers loaded the chip with reagents: metal salts and ligands. Then, by varying the temperature, the researchers acquired nanoparticles of different shapes and sizes. After that, the researchers described the acquired material and loaded fluorescent tags on its surface before trying to release them with a laser. Finally, the reseachers analyzed the toxicity of nanoparticles in murine melanoma cells. Image courtesy of Irina Koryakina

Among the advantages of MOFs is their diversity. Any such particle is a transition metal atom surrounded by ligands – organic chain molecules. One can use different reagents when synthesizing, thus obtaining various physical and chemical properties of the product.

The researchers used three types of metal-organic compounds with the same ligands (trimesic acid) and different metal frameworks: in the first case, it was copper sulfate, in the second – copper nitrate, and in the third – nickel nitrate. These MOFs are well-researched and the abundance of data provided scientists with a better chance of understanding what changes occur when applying the new method.

Additional experiments showed that the microfluidic method isn’t limited to specific chemical reagents and can be used for the synthesis of different MOFs. 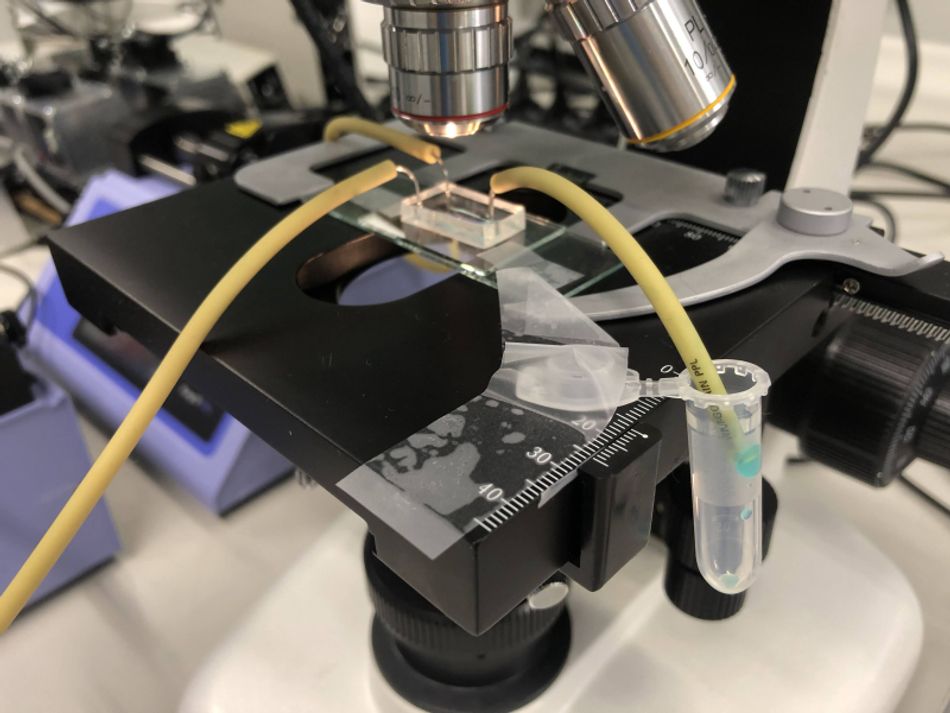 Most research took place at the School of Physics and Engineering, but such a large-scale project requires a big research team, so ITMO’s specialists were joined by experts from other universities. Staff of Alferov University of the Russian Academy of Sciences and Institute for Analytical Instrumentation RAS helped design and assemble microfluidic chips; specialists from Peter the Great St. Petersburg Polytechnic University performed experiments on cells; and St. Petersburg State University’s researchers did the porosity analysis.

Valentin Milichko, PhD, a senior research associate at the School of Physics and Engineering and one of the paper’s authors, who also works at University of Lorraine, France, joined the team to analyze the structure of nanoparticles.

The authors plan to improve the synthesis method, make it more controllable, and achieve  more uniform results when producing the material.

In the case of a continuous flow, the reagents are supplied unevenly and a concentration gradient occurs, which leads to the formation of nanoparticles with different shapes and sizes. The scientists want to reduce the concentration gradient to the minimum and thereby improve the quality of the product. To do this, they plan to use drip microfluidics – two streams of reagents are mixed into one, and then two more streams run perpendicularly into it, dividing the initial one into drops. Each drop is a microreactor in which two reagents are mixed at a certain ratio and the desired concentration is achieved, which means that nanoparticles are identical. One can use thousands of such drops, which makes it possible to scale up the work. 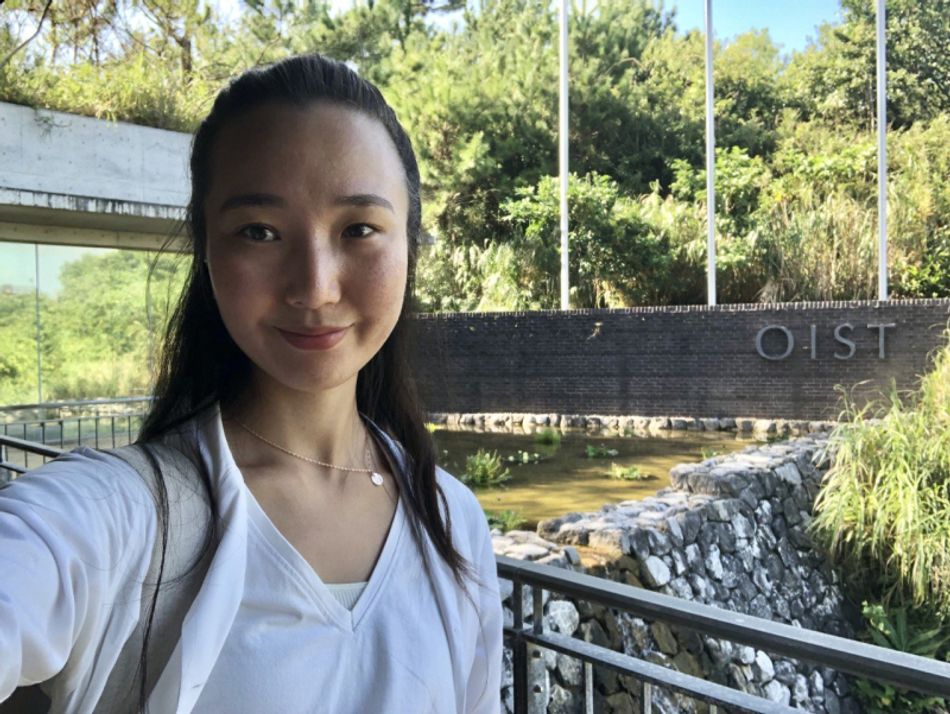 “Right now I’m at Okinawa Institute of Science and Technology, Japan. It’s a modern cutting-edge university with top-level equipment and prominent scientists. In its 11 years of existence, it has become a center for scientific collaborations where experts from various fields, including microfluidics, gather together. To conduct further research, we decided to cooperate with this institution and we hope our project will be a breakthrough in metal-organic framework synthesis,” says Irina Koryakina.

Technique has potential applications in many technological areas