According to figures by the World Health Organization, over 420 million people today are affected by diabetes. In the last 30 years, the number of people suffering from this condition has been growing steadily. Diabetics not only have to abide by a strict diet and take medications – complications from this condition can result in blindness, kidney problems, and circulatory disorders.

The earlier this disease is diagnosed, the more fulfilling and healthy the life of a patient will be. That is why scientists are constantly trying to improve technologies for conducting tests. For example, a glucometer is a good way to monitor blood sugar levels – its readings can serve as a signal that you should see a doctor, but they are not enough to make an accurate diagnosis.

“Venous blood is analyzed in order to make a diagnosis,” explains Yulia Kononova, a researcher at the Almazov National Medical Research Centre. “There are methods for its analysis that are quite accurate. However, they are not without their specifics. Some methods can only be used to analyze whole blood, which doesn’t keep for long. Other methods are based on analyzing the properties of not chemical compounds contained in the blood themselves, but the products of their transformation. All these methods require rather expensive chemicals and laboratory equipment to carry out the analysis.”

In the middle of July, the scientists from ITMO and the Almazov Centre published an article where they presented the new analysis method. The proposed technology involves the analysis of a specially condensed kind of liquid blood, which allows it to be stored for a long time. Terahertz holography technology is proposed for detecting changes in the blood composition characteristic of diabetes, which in the future may allow the test to be carried out within a couple of hours.

Diabetes is a metabolic disorder that results in high blood sugar levels. What’s more, if no treatment is carried out and sugar levels stay elevated for a long time, blood proteins such as hemoglobin and albumin bind to glucose molecules. As a result, the chemical composition of blood is markedly different from the norm.

Among other things, changes in blood composition lead to the blood of a person with diabetes having slightly different refractive indices and reflection in the terahertz range. This is what was suggested to be used for the analysis.

“The idea is that a blood sample is subjected to radiation in the terahertz range of the spectrum, and based on how this radiation passes through the sample, it is possible to gage the blood’s composition,” shares Maksim Kulya, a research associate at ITMO University. “Passing through the sample, the radiation is partly absorbed, partly refracted. We use a wide beam of terahertz radiation to illuminate the sample, and a certain distance from it the entire wavefield is recorded using a holographic technique. Having done that, we calculate the propagation of the field back into the object’s plane using numerical methods. Thus, we record a digital hologram containing the full information on the properties of radiation which interacted with the sample. Based on this information, we can estimate whether or not this blood is characteristic of a person with diabetes.” 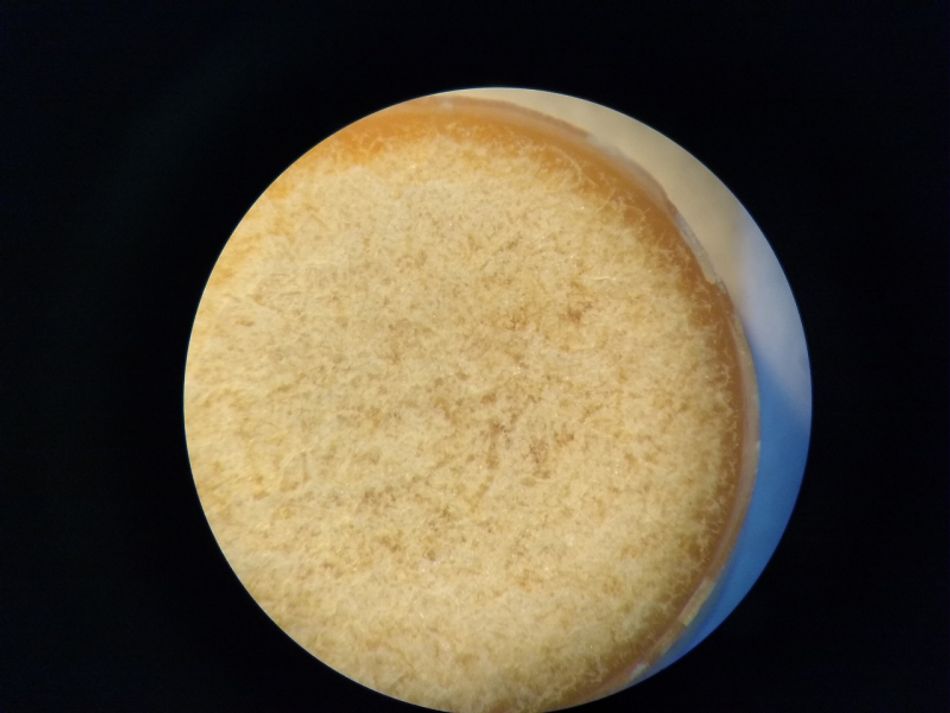 Pelleted blood. Credit: the authors of the article

What makes this method even more convenient is that the blood is analyzed as a solid, in the form of specially prepared pellets. This makes it possible to store samples without having to purchase special refrigeration units. What’s more, it allows for analyzing the blood composition without the impact of water, which is prone to absorbing terahertz radiation to a very high degree.

“The pellets are solid and can be placed into the installation both horizontally and vertically,” comments Evgeniy Odlyanitskiy, a PhD student at ITMO University. “What’s more, their properties remain the same for a long time. It’s also important for our method that we have a-priori information about their thickness – having prepared a sample, we can measure it in an accurate way. By contrast, liquid plasma needs to be poured into a cuvette, which distorts the result because of its walls.”

It is possible that such a method of processing blood for analyses might be used in other studies in the future.

The research was conducted as part of the work under the RFBR-CNRS grant for the research project 18-51-16002, RFBR 17-00-00275 (17-00-00272). Participating in the projects were the staff of ITMO University’s Femtomedicine Laboratory and Laboratory of Digital and Display Holography.