Scientists from ITMO University, Saint Petersburg Academic University, and ETH Zurich have created a flexible and transparent membrane which makes infrared beams visible to the human eye. It can be used to make visualizers needed at optical laboratories and production facilities.

It’s well known that infrared (IR) radiation is invisible to the human eye. But it often happens that people still need to see the beam of a laser working in the infrared range. It’s necessary, for example, when checking a laser installation, as well as its adjustment.

“As of now, in the field of infrared optics there is the task of visualizing infrared radiation used for various purposes,” says Sergey Makarov, the chief research associate at ITMO University’s Laboratory of Hybrid Nanophotonics and Optoelectronics. “This type of radiation is widely used in medicine, at production sites, in lidars, as well as in fundamental research. Practically every second optical laboratory has infrared laser installations, for example, we at ITMO alone have over a hundred of them.”

To see whether an installation emits radiation in the infrared range, you don’t necessarily have to put on a night vision device or use a special camera. Cards made of special material are used for this purpose.

“If you’re using a laser that operates in the visible range, you can just take a regular sheet of paper and place it transversely to the beam, and you’ll see a dot,” explains Sergey Makarov. “But this isn’t going to work with an IR laser – you’ll notice the beam only when it starts burning the paper. However, in this case there are special cards that work in a similar way – if you place one in the beam’s way, you’ll see a dot on its surface. They’re made with the addition of rare earth metal ions that absorb IR radiation, emit it and convert it to the visible spectrum.”

On the left: an infrared beam is passing through the invented visualizer, after which it falls onto a commercial nontransparent analogue. On the right: demonstration of the visualizer’s high flexibility in the operation mode. Credit: Photo from article

Such cards are an important component for any optical laboratory or production facility using infrared lasers. But, according to the scientists, these have a number of disadvantages, ranging from their high price to their relatively short service life. What’s more, they’re not universal and won’t be a good fit for every system out there.

“Since the cards work by actually absorbing infrared radiation and converting it into the visible spectrum, they can only be used at a certain wavelength,” says Daria Markina, a PhD student at ITMO University’s Faculty of Physics and Engineering. “They’re made to fit the most widespread wavelengths: about 1,000 nanometers (for medicine) and 1,500 nanometers (for telecommunications). However, it’s often necessary to use and adjust a laser at a non-standard wavelength. We often experienced that while the cards would work well in one range, they’d hardly work in another, which required you to order new ones, spending about $100 apiece, then they’d burn out, and you had to buy new ones all over again.”

From theory to practice 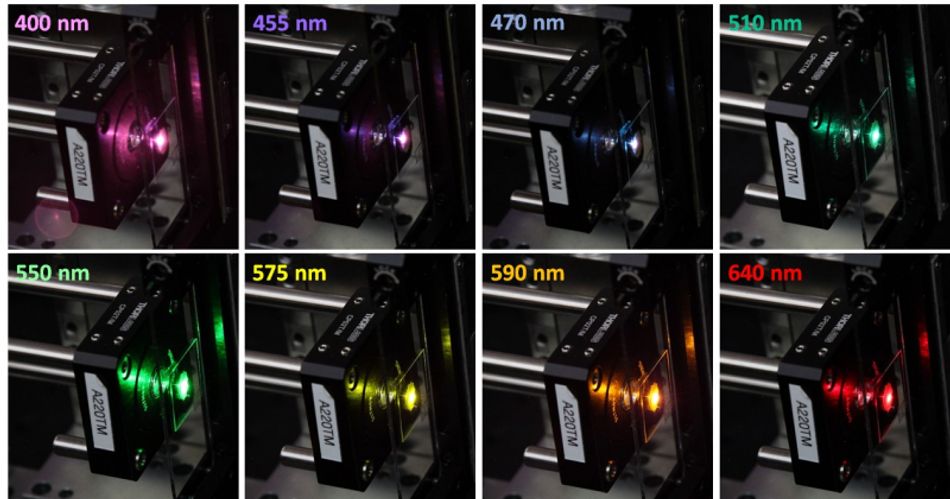 Using the proposed technology, infrared radiation can be converted to any color of the rainbow. The numbers in the pictures correspond to the wavelengths of the converted radiation. Credit: Photo from article

Constantly experiencing difficulties related to the high cost and short service life of the infrared visualizers used, scientists from ITMO University, Saint Petersburg Academic University, and Swiss Federal Institute of Technology Zurich (ETH Zurich) decided to apply their fundamental research to the creation of a material for new-generation IR visualizers free from many disadvantages of the existing technology.

“As optical physicists, we understand how all this works, what’s more, we have done a great deal of groundwork in the field of nanomaterials and nanotechnologies – we’ve long been researching such phenomena as the conversion of IR radiation into the visible range through the generation of optical harmonics in nanostructures,” explains Mikhail Petrov, a senior research associate at ITMO University’s Faculty of Physics and Engineering. “In recent years, we’ve studied the fundamental aspects of how laser radiation is converted into visible light based on nanoparticles.”

To create a prototype, the researchers opted for gallium phosphide (GaP) nanowires. Saint Petersburg Academic University scientists have been working for a long time on growing nanostructures from this material, which has some very interesting optical properties.

“Due to the fact that this material has a noncentrosymmetric crystal lattice, it can halve the wavelength of the incident radiation. Thus, infrared light with a wavelength of 1,000 nanometers is converted into visible radiation of 500 nanometers in length, the one that is greenish-blue in color. This principle works for radiation in a wide range of wavelengths, which solves the key problem of many existing IR visualizing cards – their non-versatility and spectral limitations,” notes Vladimir Fedorov, a senior research associate at Saint Petersburg Academic University’s Laboratory of Renewable Energy Sources. 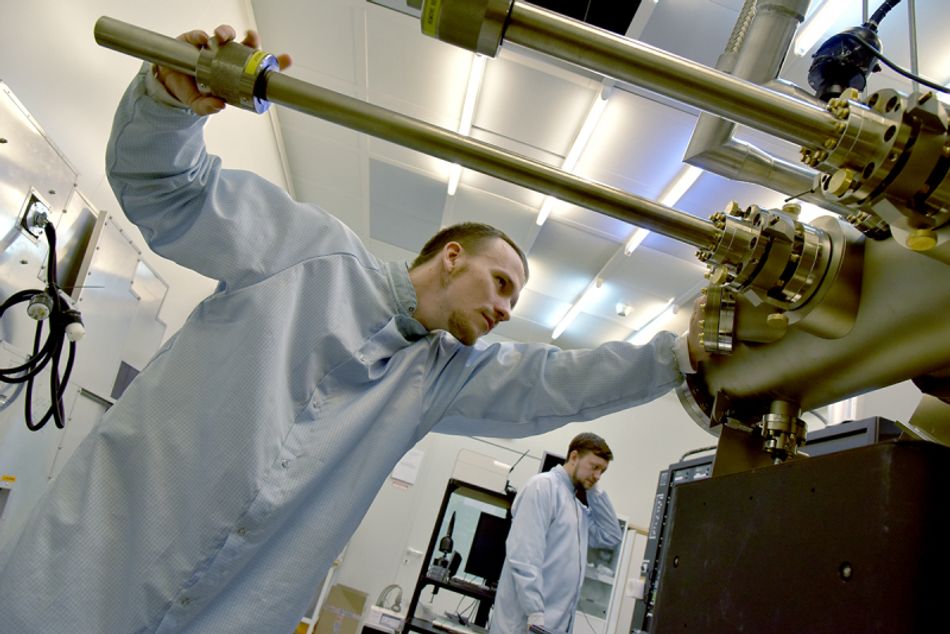 “Our colleagues grew gallium phosphide nanowires vertically on a substrate,” shares Ivan Mukhin, head of Saint Petersburg Academic University’s Laboratory of Renewable Energy Sources. “Then, they covered the nanowires with a thin polymer layer, tore it off the substrate, and obtained a membrane filled with these nanostructures. In some respects this is a a completely unique technology for Russia. This is how we got a flexible, thin, and translucent film, which transmits an infrared beam without any significant distortions, reducing its wavelength and making it visible to the human eye. All this was possible thanks to the excellent technological equipment in our laboratory”

"They are not only used in infrared structures, but also in displays and touch screens. We believe that nanowire-based structures will create a new generation of devices in the near future and replace existing solutions, " he says.

The film’s transparency plays a very important role. Existing samples fail to transmit the radiation; much as a sheet of paper, they fully block the beam out. The sample obtained by the St. Petersburg scientists, however, does let the light pass through, which makes it much easier to use.

“Adjusting optical systems often takes up a lot of time,” says Mariia Timofeeva, researcher at  ETH Zurich. “In order to simply redirect the beam, which has to be done on an almost everyday basis, you often need to reflect it off several mirrors at a certain angle. This is very fine tuning. In the case of infrared radiation, you’re left working practically blindly. It’s much more convenient to make adjustments when the installation is turned on and we see the converted beam. Only placing an opaque card doesn’t always cut it, as sometimes, having adjusted one installation module, you have to adjust another one, ideally at the same time controlling how the beam is passing through. Thus, using a transparent card allows us to kill two birds with one stone – we’re able to see the light without getting in its way; as far as we know, there are no analogues with similar features on the market. Transferring this fundamental work with single particles to real-life scalable technology is an important step."

INSPIRE project to lead a revolution in photonic integrated circuits

INSPIRE project to lead a revolution in photonic integrated circuits

The H2020-funded INSPIRE project is leading a revolution in photonic integrated circuits with so-called micro-transfer printing technology and establishment of world-first fabrication platform.