The global share of “green” power is growing. According to the International Energy Agency (IEA), renewable energy will make up 30% of the world’s total power. Engineers are intrigued not only by conventional solar panels, but also transparent thin-film photoactive materials, which could be placed on top of windows and used as miniature energy generators. But in order to introduce such devices on a large scale, scientists must solve a number of problems.

“As an idea, transparent solar cells sound fascinating,” says Pavel Voroshilov, a researcher at ITMO University’s Faculty of Physics and Engineering. “But they have one major drawback. And that is low efficiency. Regular thin-film solar cells have a non-transparent metal back contact that allows them to capture more light. Transparent solar cells use a light-permeating back electrode. In that case, some of the photons are inevitably lost when passing through, thus reducing the devices’ performance. Besides, producing a back electrode with the right properties can be quite expensive.”

Many research teams are working on the issue. There are several possible solutions – such as developing brand-new materials. But that is a lengthy and costly process, which is why scientists are attempting to improve existing technologies. For instance, the efficiency of solar cells can be improved through doping, which is the modification of materials by adding impurities that are expected to improve their properties.

“With organic solar cells, it’s been shown that doping the transport layers improves their performance,” explains Pavel Voroshilov. “A so-called built-in field appears within them that makes it possible to sort the charges generated in the active layer more efficiently. This also improves the cells’ contact properties, meaning that more charges reach the electrodes.”

But this, too, presents an issue. Ensuring that the impurities are correctly applied onto the material requires complex approaches and expensive equipment. Researchers at ITMO University have proposed a method that solves the issue in organic solar cells. 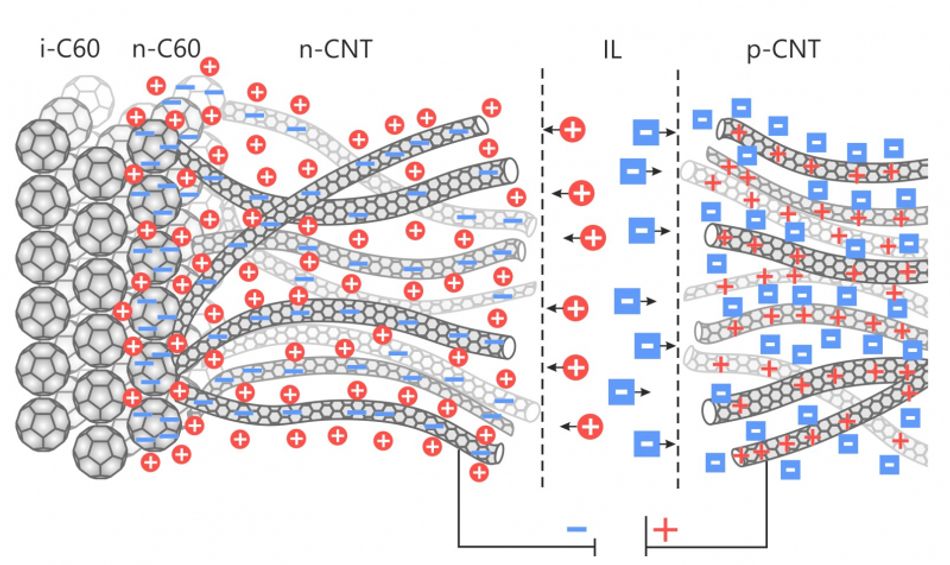 Together with their American partners in a megagrant project (Professor Anvar Zakhidov’s team) and their colleagues from Moscow, the physicists from St. Petersburg are working on the concept of controlled doping of carbon nanomaterials with the use of a special ionic liquid. Simply put, it is a liquid that contains certain charged particles – a combination of cations and anions. Upon external influence, these particles may penetrate the porous structure of nanomaterials, thereby changing their properties and characteristics.

The staff of ITMO University’s Faculty of Physics and Engineering have suggested applying this method to organic solar cells. For their experiments, they took a solar cell based on small molecules, replaced the non-transparent metal electrode with multiwall carbon nanotubes, and significantly increased the thickness of the fullerene transport layer.

“It’s a classic kind of organic solar cell,” says Pavel Voroshilov. “One of its advantages is the ability to produce transparent photovoltaic panels for smart glass. You wouldn’t even be able to tell if they’re there or not with the naked eye. The reason is that they absorb almost no visible light and function only in the near-infrared spectrum. But if we want, we can change the thickness or the chemical composition to turn them, for instance, a pleasant shade of blue or orange. In order to preserve the structure’s transparency, we use nanotubes as a current-collecting electrode that can easily be applied onto the surface.”

Then, the scientists doped the nanotube film using an ion gate. The same was done to the so-called transport layer, which is responsible for ensuring that the trapped charge from the active layer successfully reaches the electrode.

“In this case, we managed to do this without using vacuum chambers, in ambient conditions. All we had to do was dribble some ionic liquid and apply a slight charge in order to create the necessary properties,” adds Pavel Voroshilov. 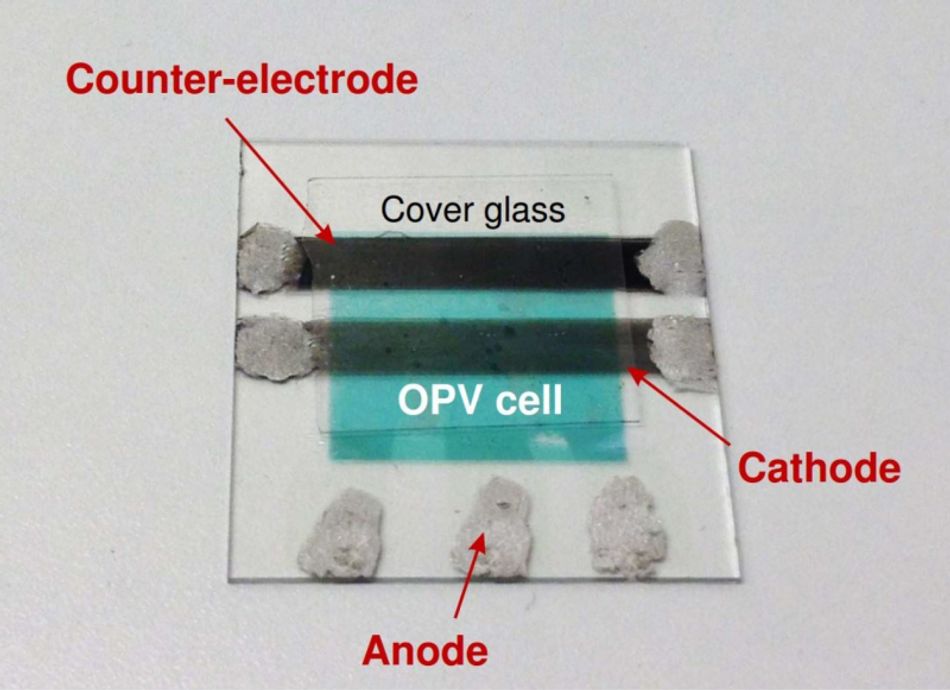 As was expected, the non-doped transparent solar cell sample demonstrated an extremely low efficiency rate – the nanotubes didn’t have the necessary qualities for this application. As a result of the doping with ionic liquid, the researchers were able to boost the same device’s efficiency by 50 times in only a minute, reaching the standard performance level for the material used as the active layer. Even though the performance coefficient amounted to less than one percent after the processing, the scientists were inspired by the results, which signified that the device had acquired improved properties. They believe that the same method could be used to boost the characteristics of other materials that demonstrate a higher efficiency from the start.

“The specific numbers will vary, as different devices can employ different principles, but we can predict that we’ll be able to increase the efficiency of other solar cell types in the same manner,” notes Pavel Voroshilov.

He also adds that the new technology makes it possible to increase the thickness of the transport layer. That is good because the transport layer not only carries charged particles, but also protects the active layer from outside elements. The thicker it is, the more durability the solar cell itself has. In addition, the solar cells acquire a new function in becoming tunable – meaning, for instance, that they can dynamically change their color.

Now, the researchers plan to experiment with different materials and improve the doping technology itself. In the future, the physicists hope to completely abandon the need to use external voltage for processing.

“Our next step is to make it so that we wouldn’t have to expend energy on tuning the material,” explains Pavel Voroshilov. “All we’ll need to do is place our device under sunlight and it’ll adopt the necessary properties for power generation all on its own.”

Scientists systematically study the path of the sequential deposition reaction used to build perovskite solar panels. The study is published in Science Advances and offers much-needed, fundamental understanding of perovskite formation and its different stages.