Physicists from ITMO University have improved the method of converting optical radiation into terahertz radiation using a liquid, which until recently was thought of as unpromising. Nevertheless, the achieved efficiency of the conversion in such a medium is a record-breaking 0.1%. It’s a proven fact that terahertz radiation, unlike X-radiation, is harmless and can be used in medicine, security systems, ecological monitoring, analysis of art objects, and in the food industry. A research paper on the subject was published in the Communications Physics journal. This research is supported by a grant from the Russian Science Foundation (RSF).

Terahertz (THz) radiation is a type of electromagnetic radiation with a frequency spectrum between the infrared and microwave ranges. It corresponds to light wavelengths from 3 millimeters to 30 micrometers (or from 0.1 to 100 THz). Oscillations typical for heavy molecules (including organic ones) and movements of crystals’ atoms lie in this range.

Moreover, unlike X-radiation, THz radiation is harmless to people, which allows us to use it to solve many important applied tasks. Scientists have earlier proven that it can be used for diagnostics, prevention, and treatment of diseases (such as cancer, diabetes, etc.), as well as in security systems for public spaces, for ecological monitoring, for safe analysis of art objects, and in the food industry for quality and product assessment.

However, devices based on THz radiation still aren’t used widely. The problem is that the strength of a signal significantly decreases in the atmosphere and as it passes certain obstacles, especially if they contain moisture. In particular, once the THz signal passes a millimeter of saline solution (similar in its characteristics to organic tissue), its strength decreases by a factor of 500 million. That’s why we need to create powerful and compact sources, as well as sensitive THz radiation receivers, in order to replace X-rays with THz scanners.

Scientists from ITMO University were able to increase the efficiency of generation of THz radiation using one of the best types of excitation sources – lasers. In previous research projects, the team improved the filamentation process in liquids – a method widely used for solving such a task, which is based on the optical-to-THz conversion. 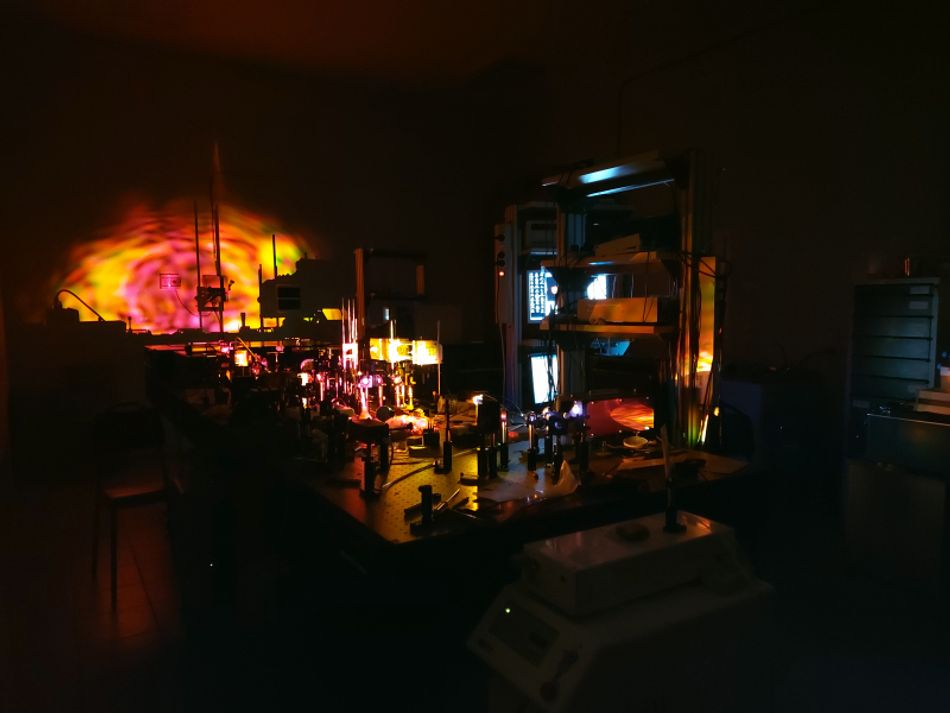 Optical radiation – light – causes generation of the THz field at highly intense interaction with the medium (about 1013-1014 W/cm2). During filamentation, laser radiation of high intensity causes cascade ionization of the medium, in which electrons become separated from atoms. Electrons enter a highly excited state and form a plasma channel along the entire length of the filament.

The filament is a light-emitting thread that is left after radiation-medium interaction. Inside this channel, various types of radiation form: optical, infrared, X-ray, and terahertz. This time, the scientists focused the laser beam not in a gaseous medium, as it’s usually done, but in a liquid one.

As it was known that liquids absorb THz radiation well, they haven’t been considered to be its source. However, the research team from ITMO University found out that THz radiation is generated with higher efficiency in liquid media than it is in gaseous ones. This can be explained by the fact that in gases, the density of molecules is smaller and ionization energy is bigger. That’s why in the gas medium, the potential number of excited electrons is smaller.

With the help of double-pulse excitation, the scientists were able to reach a new maximum value of the optical-to-THz conversion’s efficiency (0.1%). The idea behind this approach lies in launching two excitation pulses into the medium. The first one pre-ionizes the medium and the second one enhances the strength of the THz field during the interaction with the plasma from the first pulse.

The experimental results, supported by numerical simulations, reveal that longer pre-pulses are preferable for induction of the effective ionization process, while shorter signals are better for a stronger laser-plasma interaction.

The conducted work allowed researchers to determine interesting physical regularities in the two-pulse excitation of various liquids. The scientists demonstrated that THz pulses in different liquids become amplified in several picoseconds (10 seconds to the power of -12) after being excited by the first pulse; this phenomenon is connected to the lifetime of plasma. This assumption is supported by experimental measurements.

“I would like to note that the received result of 0.1% can be improved in the future by changing the working range of laser wavelengths. If we shift the central wavelength to the average infrared range (up to three micrometers) during the laser excitation, the efficiency would achieve even more impressive values – about 1-5%. In this way, we have found the optimal conditions for the highly efficient generation of terahertz waves in liquids. Our project is a big step towards the future, where powerful and resource-saving sources of THz radiation will be in wide use,” comments Anton Tsypkin, DSc, the head of ITMO University’s International Laboratory of Femtosecond Optics and Femtotechnologies.

Digitalization is an important climate tool

Devices known as optical parametric oscillators are among the widely used nonlinear resonators in optics; they are "nonlinear" in that there is light flowing into the system and light leaking out, but not at the same wavelengths.

Putting on the pressure improves glass for fiber optics

Rapid, accurate communication worldwide is possible via fiber optic cables, but as good as they are, they are not perfect. Now, researchers from Penn State and AGC Inc in Japan suggest that the silica glass used for these cables would have less signal loss if it were manufactured under high pressure