Shoe manufacturing has a long history of evolution; the sole alone has undergone numerous stages of development. Before the 1950s, shoes were typically made with leather, a material that was growing increasingly difficult to obtain. That is why many manufacturers turned to hand-cutting soles from rubber mats and adjusting them to the shank of the shoe; an elaborate process with 37 steps.  The advent of injection moulding machines, which cast several hundred parts per hour, are far faster, more precise, more reliable and less expensive than manufacturing by hand. These specialised machines are now being used by more and more established shoe manufacturers around the world.

DESMA’s injection moulding machines are reminiscent of a giant wheel lying on its side. They can accommodate moulds for 60 individual soles on their circumference. Next to the rotary table, there is a separate plant with a linear arm, on which a reaction-casting unit descends. The reaction-casting unit fills the moulds with liquid polyurethane – an elastic polymer that makes shoe soles comfortable and durable – in around six seconds. Once the moulds have been filled, two jaws close the form from right and left. A stamp comes from above to imprint the inscription of the respective sole into the liquid. While the liquid polyurethane hardens, as though it were in a giant waffle-iron, the wheel races around. Finally, the moulds open and the hardened shoe sole is revealed. The shoe sole is removed by hand and the mould is brushed with a release agent for the next round. 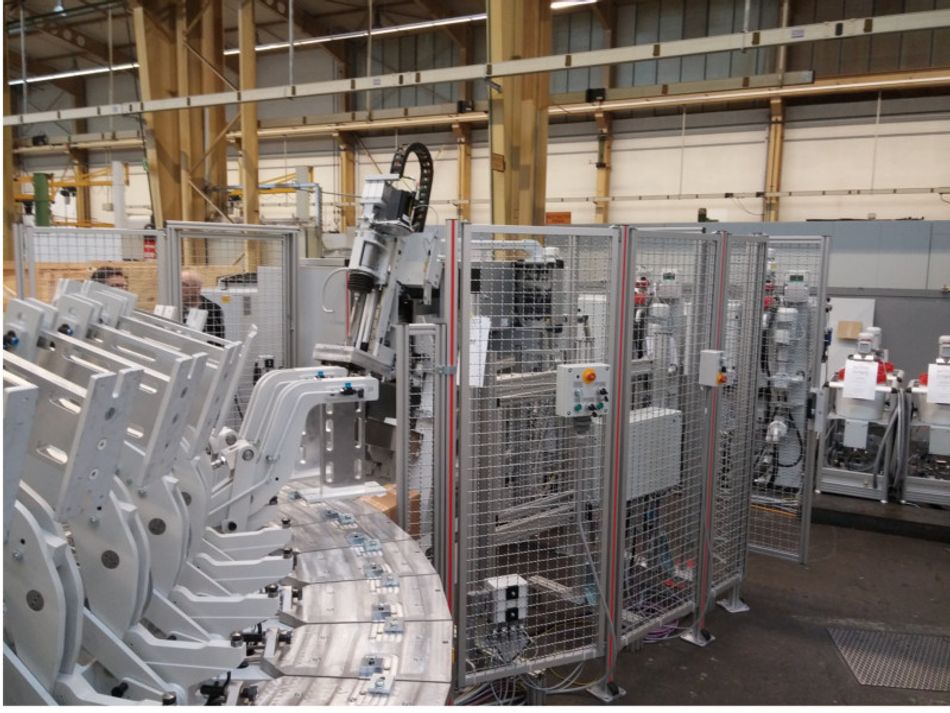 HepcoMotion’s guidance system moves the reaction casting unit, here without the protective cladding as in picture 3, precisely towards the round soling machine up to 10cm to allow filling of the moulds. The soling machine itself, of which a part can be seen on the picture, is circular and can have a diameter of up to six metres

The challenge: finding linear guides for a 270kg payload

DESMA Shoemakers are world-leaders in injection moulding machines. The company, founded in 1946 in Germany, has an export share of 95% and is valued by customers worldwide for their system reliability. Some plants in Asia have been running for over 40 years. The casting unit weighs up to 270kg and moves back and forth on linear rails – over weeks, months, years and decades. This requires a particularly robust, reliable and smooth linear guide.

HepcoMotion has specialised in the development of linear motion systems and automation components since 1969. Its portfolio includes the HDS2 heavy duty linear range – a guide designed to handle the heaviest loads. Within this range is the HB25 – a sturdy 130mm wide by 220mm high aluminium beam, 24kg per metre in weight. A 1300mm length of HB25 forms the arm of the casting unit, which drives over the turntable to fill moulds with liquid polyurethane.

On each corner of the HB25 beam a single-edge stainless-steel slide is mounted; the lower slides each have a rack cut into the face opposite the V in the slide.  The casting unit is mounted to two carriage plates, each with four V bearings which run on the slides. Hepco’s V guide technology is well suited to this application as the V bearings provide a unique self-cleaning action which keeps machines running.  Movement is provided by a pinion, also mounted to the carriage plate and driven by a motor, which drives the carriage along the rack. The carriage moves back and forth through 100mm with each full operation. The pinion is made of precision ground and hardened steel ensuring reliability.  An automatic lubrication system applies a uniform film of lubricant to the rack and pinion, facilitating low-friction movement, reducing wear and improving life. “This construction is quite unusual,” says Mark Völkers, Sales Engineer for HepcoMotion. “Normally slides are mounted to two beams that run parallel. By assembling the four slides on a single beam it is possible to save space, manage the high payload and guarantee safe and trouble-free operation over long periods of time.”

HepcoMotion’s linear motion technology keeps maintenance costs low; should play develop in the carriage, the eccentric V bearings can be adjusted to remove play within a matter of minutes – unlike traditional ball-bearing based systems where components often need be replaced. Nitrile seals in the bearings provide protection from dirt ingress and the bearings are lubricated for life internally, providing low friction movement. “These features of HepcoMotion’s components reduce downtime in harsh industrial environments and improve plant productivity,” says Mark.

HepcoMotion is a world-leading manufacturer of linear motion systems and automation components. HepcoMotion has been leading the development of V Guide technology since 1969, and continues to develop innovative linear products and track systems that offer new solutions to design engineers.