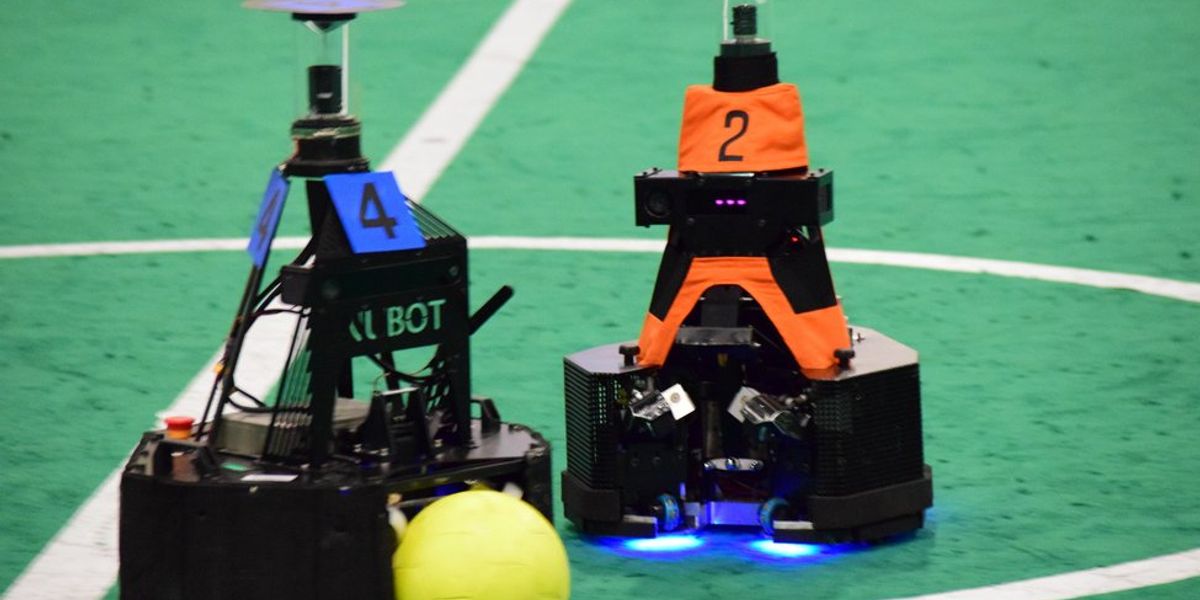 The Robocup will continue in slimmed-down form this year. Photo: Tech United

The soccer robots are challenged to think creatively, to play together and to anticipate quickly on what the opponent is doing.

For the first time, the Robocup is not about the number of goals scored. Due to limitations caused by the coronavirus, the organization decided to cancel the robot soccer World Cup matches. Participating teams can now join technical and scientific challenges via the internet. Student team Tech United  of Eindhoven University of Technology will be present on June 26 and 27. "We can't become world champions, but we can show what we have achieved in the past year," says Ainse Kokkelmans, master's student in Mechanical Engineering and team leader of Tech United.

It was a 'weird year' for the soccer arm of Tech United, agrees Kokkelmans. "When it was announced that many matches and meetings were cancelled due to corona, I found it quite difficult to keep the team motivated. Also testing the software of the robots became a lot more complicated. Team meetings have been online for a while, and they are going quite well. We hold them in a hybrid form; a number of team members are present on our test field, while the rest dial in via a video link. We were even able to recruit a record number of new students this year; there are now around twenty active members."

Of course, this year's World Cup robot soccer feels different for Kokkelmans, but Tech United still has the ambition to come first in both challenges and show other teams what the student team has been working hard on over the past year. That is why the members never doubted their participation in the slimmed down version of the Robocup. Kokkelmans: "The Robocup allowed us to come up with a concrete plan and it gave us a hard deadline. That way we could keep motivating each other." 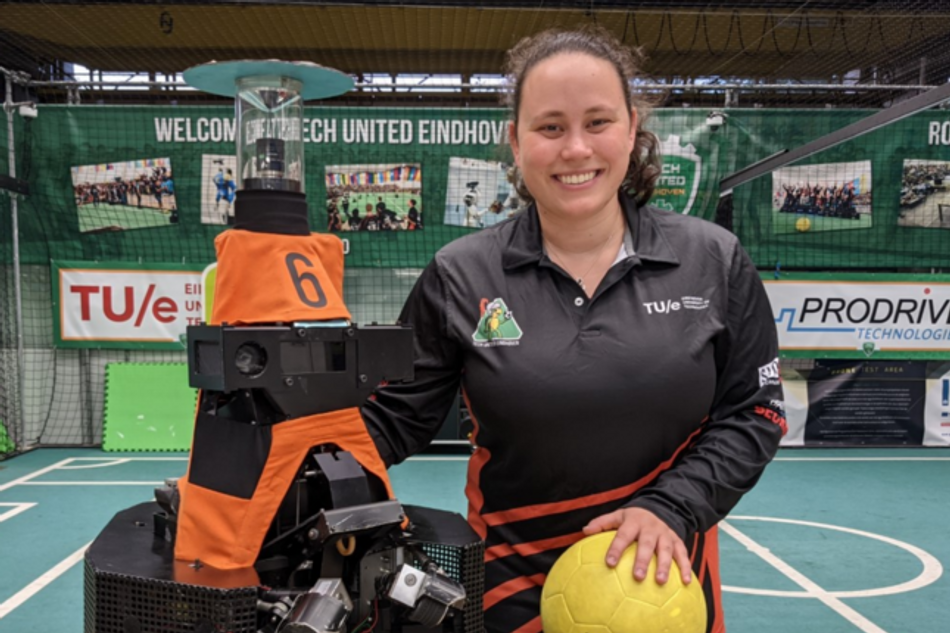 For the technical challenge the members of Tech United have been working on the so-called Open Pose for the past year. This is about recognizing the position and orientation of people, think for example of their limbs, face, hands and feet. Now robots see people in the same way they see other robots: as a kind of cylinder, where it is unclear in which direction the human is looking or where it might be moving.

Tech United is now coding robots so that they can "see" human opponents in a different way than their robotic counterparts. By recognizing the position of the human body, the robots can better respond to human behavior.  "If a person raises their hand because they want the ball, then a robot should be able to give the ball. Or if a person's legs are open, we want a robot to be able to play the ball through them", explains Kokkelmans.

Tech United's entry for the scientific challenge is a combination of different projects and research conducted by students. These include improving the shooting mechanism ('does the ball follow the path that the team had in mind?'), the catching mechanism ('now a goalie can stop the ball by standing in front of it, but catching it is not yet possible') and heading ('robots can't yet handle balls through the air properly').

Tech United is happy that the challenges can continue, because ultimately robot soccer is about one important aspect: helping technology to move forward. Kokkelmans: "Various elements in robot soccer are elements that robots are generally not very good at, such as creative thinking, playing together and quickly anticipating what the opponent is doing. We want to advance these fundamental challenges for robots through play, which is why we are pleased that a virtual Robocup is taking place this year." 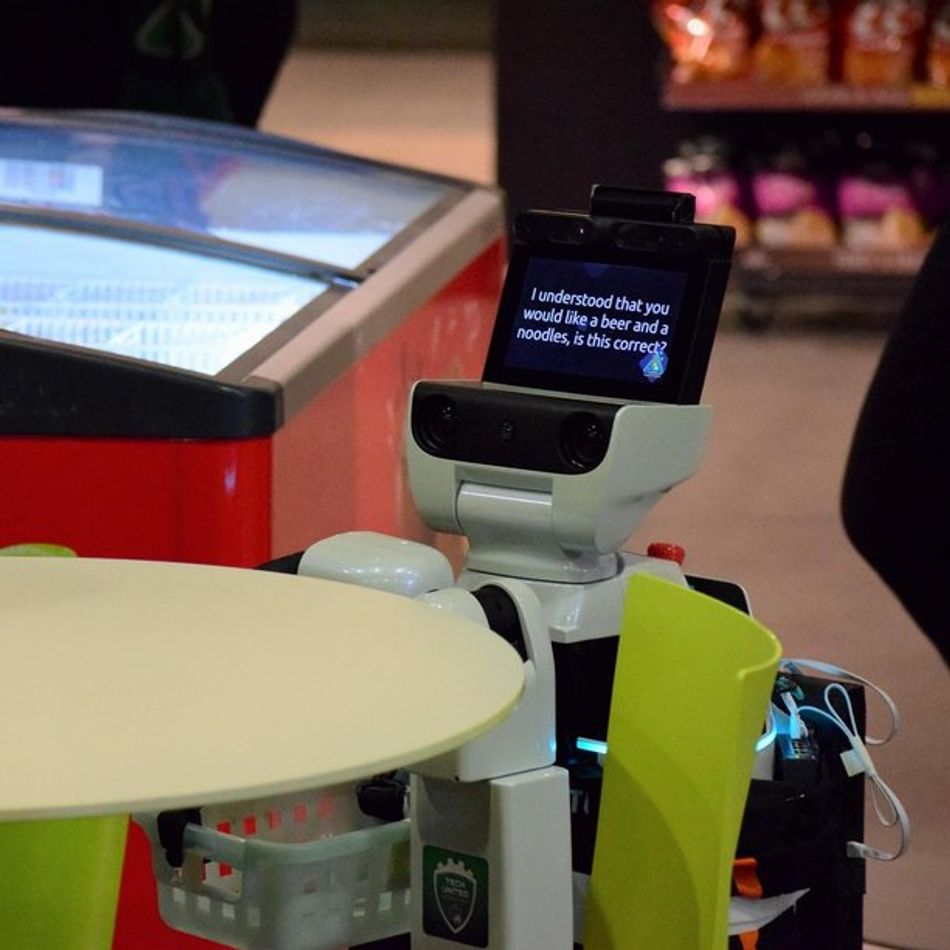 The Robocup is the annual global tournament for autonomous (self-directed) robots that has been taking place since 1997. Various robot matches are played between teams around the world during the Robocup. In addition to the World Cup of robot soccer, student team Tech United normally competes in the healthcare robot competition as well, although the healthcare robots will not compete this year. 2019 was a gold-round year for Tech United: that's the year that soccer robots and the healthcare robot HERO (pictured on the left) became world champions in Sydney.

Students reveal smart sleeve that lets you feel and understand any foreign ...

We are looking for innovators developing recycling technology or circular products from engineering plastics.

The student winners of the High-Temperature Carbon-Fiber 3D printing challenge have ambitions to build better rovers.

Based on the 'Crover Effect' for locomotion in granular media, the CROVER robot is able to move through bulk solids and powders. The team wins $25,000 of manufacturing support from Mitsubishi Chemical Advanced Materials to take their design to the next level.