The sight of a RoboBee careening towards a wall or crashing into a glass box may have once triggered panic in the researchers in the Harvard Microrobotics Laboratory at the Harvard John A. Paulson School of Engineering and Applied Science (SEAS), but no more.

Researchers at SEAS and the Wyss Institute for Biologically Inspired Engineering have developed a resilient RoboBee powered by soft artificial muscles that can crash into walls, fall onto the floor, and collide with other RoboBees without being damaged. It is the first microrobot powered by soft actuators to achieve controlled flight.

“There has been a big push in the field of microrobotics to make mobile robots out of soft actuators because they are so resilient,” said Yufeng Chen, a former graduate student and postdoctoral fellow at SEAS and first author of the paper. “However, many people in the field have been skeptical that they could be used for flying robots because the power density of those actuators simply hasn’t been high enough and they are notoriously difficult to control. Our actuator has high enough power density and controllability to achieve hovering flight.”

To solve the problem of power density, the researchers built upon the electrically-driven soft actuators developed in the lab of David Clarke, the Extended Tarr Family Professor of Materials. These soft actuators are made using dielectric elastomers, soft materials with good insulating properties, that deform when an electric field is applied.

By improving the electrode conductivity, the researchers were able to operate the actuator at 500 Hertz, on par with the rigid actuators used previously in similar robots.

Another challenge when dealing with soft actuators is that the system tends to buckle and become unstable. To solve this challenge, the researchers built a lightweight airframe with a piece of vertical constraining thread to prevent the actuator from buckling.

The soft actuators can be easily assembled and replaced in these small scale robots. To demonstrate various flight capabilities, the researchers built several different models of the soft-powered RoboBee. A two-wing model could takeoff from the ground but had no additional control. A four-wing, two actuator model could fly in a cluttered environment, overcoming multiple collisions in a single flight.

“One advantage of small-scale, low-mass robots is their resilience to external impacts,” said Elizabeth Farrell Helbling, a former graduate student at SEAS and a coauthor on the paper. “The soft actuator provides an additional benefit because it can absorb impact better than traditional actuation strategies. This would come in handy in potential applications such as flying through rubble for search and rescue missions. ” 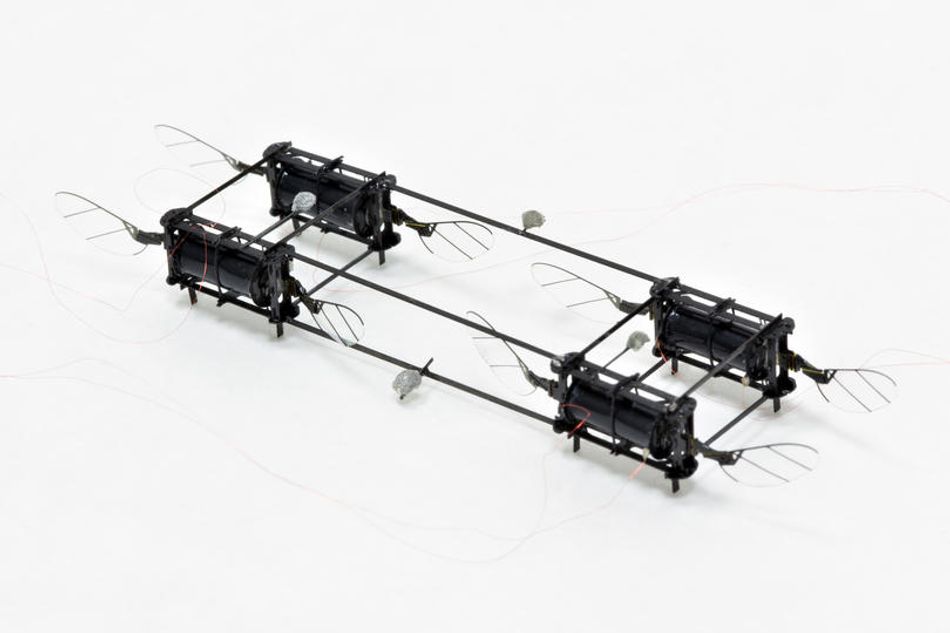 Next, the researchers aim to increase the efficiency of the soft-powered robot, which still lags far behind more traditional flying robots.

“Soft actuators with muscle-like properties and electrical activation represent a grand challenge in robotics,” says Robert Wood, Charles River Professor of Engineering and Applied Sciences in SEAS, core faculty member of the Wyss Institute for Biologically Inspired Engineering and senior author of the paper. “If we could engineer high performance artificial muscles, the sky is the limit for what robots we could build.”

Plastic mini-robot ‘walks’ under the influence of light