The Tyre as a Vehicle Component

Probably, when it comes to cars, the first thing you think about is the engine. Or maybe design. However, a few people know that tyres play a crucial role in determining vehicles performance in terms of noise, comfort, vibration, and handling behavior (NVH). Indeed, tyres are the only components capable of actively exchanging traction forces with the environment: when pressing the accelerator pedal, the driver substantially determines an instantaneous speed difference between the centre of the wheel and the periphery of the tyre, causing it to deform. Due to the deformation, shear stresses arise in the contact patch, and the vehicle is gradually sped up. The same occurs while braking, with the difference that the car is forced to decelerate.

With this in mind, it is easy to understand how the maximum forces exerted by the road on the tyre strictly depend on their characteristics. These may vary due to different factors, including primarily tread temperature and wear. Roughly speaking, to maximise the performance of a car, it is fundamental to correctly manage the available grip at the tyre-road interface, optimising the operating conditions and monitoring all the useful parameters in real time. In the last two decades, a great research effort has therefore been devoted to developing methodologies and techniques that would allow to quickly acquire information about all the physical quantities in interest: stress, strain, deformations, local temperature, etc. We are mainly referring to Smart or Intelligent Tyres.

Smart and Intelligent Tyres were mentioned by Pacejka in the First IAVSD Tyre Colloquium in Delft in the early 1990s. Nowadays, they are able to provide useful information about traction, tread wear, temperature and load through small sensors installed on their inner liner. Data from these sensors can be used to help optimise performance, reduce fuel consumption and CO2 emissions and predict any safety risks in advance, making the vehicle safer and more reliable on the road.

Another demanding topic for the intelligent tyre concepts is force and friction estimation, since the electronic control unit (ECU) of vehicle dynamic control system regulates its control strategy depending on the measured force and moment generated at the tyre-road interface. These forces can be deduced from other types of information. More specifically, two different and most widespread used approaches have been proposed in literature: acceleration-based and strain-based.

In the first case, the tyre features are foreseen through simple correlations based on signal processing techniques. This kind of approach enables to identify more useful characteristics, such as the length and the hydroplaning portion of the contact patch, the slip angle and the friction coefficient. In contrast, strain sensors have been chosen especially for the purpose of wheel force estimations. Strains in both the radial and the circumferential directions can be measured directly at the point on the inner liner of the tread and can be related to the forces exchanged with the road by employing specially developed algorithms. The major problem, however, is the need for a pre-calibration for each tyre to determine the deformation and the contact force characteristics. While carring out a large set of experimental tests could be prohibitive, some simpler methods exploiting well-known tyre models for parameter estimation are less expensive in terms of both time and cost. Hence, in the first part of my master thesis, together with other internationally renowned researchers, I investigated the correlation between the forces applied to the tyre and the circumferential strain of the tread, by using an advanced version of the so-called Flexible Ring Tyre Model.

The Flexible Ring Tyre Models were born in the early 60s, and fall into the category of the so-called circular beam models, which represent the treadband through one or more curved elastic beams. The first studies were substantially aimed at investigating the dynamic behaviour of the tyre on uneven roads, especially in relation to the vibrational phenomena connected with its in-plane dynamics. These older version were also based on some simplifying assumptions providing relatively satisfactory results within precise frequency ranges.

Currently, the most famous variation is the one developed by Gong at University of Delft. In particular, Gong’s FRTM represents the tyre tread by means of a homogeneous, circular thin elastic ring, restrained both in radial and tangential directions to the rigid rim by a foundation. This is modelled by spring and damper elements which take into account the properties of the sidewall. The ring it is also prestressed by the action of the centrifugal force and the inflation pressure. 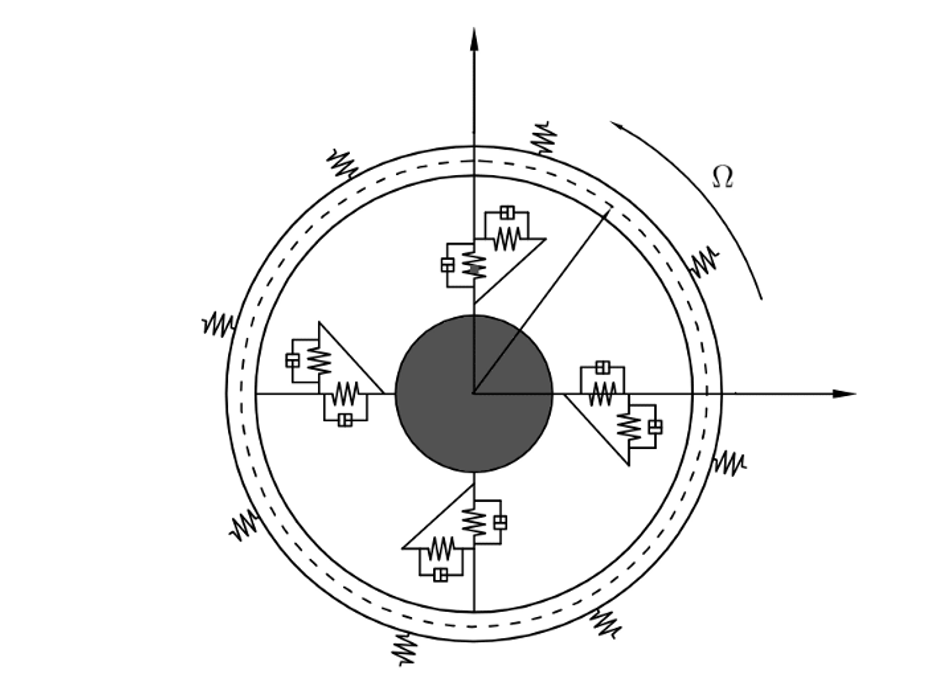 In my thesis work, I used Gong’s FRTM to capture the tread deformation due to the application of different forces acting on the tyre, including accelerating and braking ones. Without going into detail, the governing equations of the system can be derived via Hamilton’s variational principle, and constitute a set of 4 coupled PDEs (Partial Differential Equations). This system can be solved using the Modal Expansion Method (MEM) technique, by expanding the tread displacements into complex Fourier series of the angular coordinate. In this way, the PDEs can be converted into simpler ODEs (Ordinary Differential Equations). The whole procedure is quite cumbersome, but if you are keen on Maths, you can give a look at Gong’s PhD Thesis here: http://resolver.tudelft.nl/uuid:b564a05b-e580-4171-92f3-d79fdc6bdafc.

After deriving an enhanced version of Gong’s equation by removing the inextensiblity assumption, I implemented a quite simple code in MATLAB-Simulink environment and then started studying the response of the system to different vertical and tangential loads applied on the tyre. At first, I was mainly interested in extrapolating possible values for the model parameters, such as stiffnesses, dampings, elastic and shear moduli, etc. This kind of problem is usually addressed by measuring the natural frequencies of the tyre. However, I preferred another approach: I used some data available for the normal interaction to parametrise the model. Indeed, apart for dampings, it is possible to seek the other parameters values by merely investigating the system response to applied loads in steady-state conditions.

So, the first step was to analyse the tyre properties by carring out several simulations dealing only with the normal interaction problem. In this way, I was able to identify the desired parameters through an optimisation algorithm aimed at minimising the difference between the measured strain and the ones predicted by the FRTM. In the following figure you can see a plot of the tyre displacements and strain for different vertical forces and different inflation pressure levels. Of course, the higher the load, the higher the displacements; vice versa occurs for the inflation pressure. 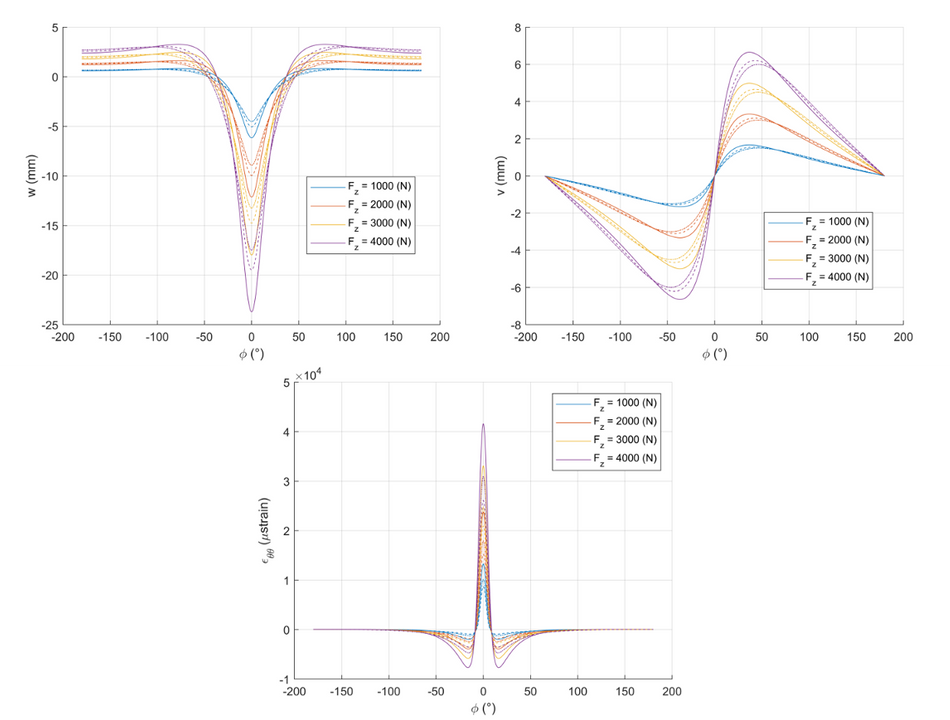 After parametrising the model, I also studied how both the forces and the tyre parameters affect some quantities in interest. Primarly: contact length, lowering and normal pressure distribution. Indeed, a reliable knowledge of these features is fundamental to forsee the tyre behaviour during accelerating and braking manoeuvres, since the shear stress trend strictly depends on them. In particular, results provided by the FRTM highlight quite different pressure distributions from the ones normally computed by employing the standard tyre models, giving a more physical representation of the normal forces distribution in the contact patch.

Finally, the last objective was to investigate the correlation between the tangential forces and the circumferential strain. More specifically, in order to compare the simulation outputs to the real deformations, I used some experimental data provided by Ari Tuononen and Yi Xiong, two very talented researchers who measured the radial displacements of the tyre tread by means of a specially designed laser sensor. Generally speaking, I was able to find a good agreement between the experimental data and the deformation predicted by the FRTM practically at any values of the slip parameter, as shown in the following plots.

A comprehensive understanding of the dynamic behaviour of the tyre is indispensable to optimise the performance of ground vehicles and make them safer. Although the most interesting physical quantities are the grip and the forces exchanged with the soil, it is extremely difficult to measure them directly. Hence, in my thesis work, I focused on an analytical study that could investigate the correlation between the circumferential strain of the tread — easily measurable through small sensors installed at the tyre inner liner — and the forces exerted by the road on the wheel. Simulation outputs are generally coherent with experimental data and can be effectively used to estimate the shear stresses arising in the contact patch, allowing to predict tyre performance in real-time.

I studied Mechanical Engineering at University of Naples "Federico II", where I graduated valedictorian with focus on vehicle dynamics and tyre modelling. After my master, I moved to Chalmers University of Technology, Gothenburg, Sweden, where I am pursuing my PhD in the COVER project, which is join... learn more