Columbia Engineering researchers have created the first flat lens capable of correctly focusing a large range of colors of any polarization to the same focal spot without the need for any additional elements. Only a micron thick, their revolutionary "flat" lens is much thinner than a sheet of paper and offers performance comparable to top-of-the-line compound lens systems. The findings of the team, led by Nanfang Yu, associate professor of applied physics, are outlined in a new study, published today by Light: Science & Applications.

Broadband imaging in the near-infrared using a single meta-lens, showing the ability of the lens in correcting chromatic aberrations, and manufacturing of meta-lenses using planar fabrication techniques similar to those used in the integrated circuits industry. Video Credit: Jane Nisselson/Columbia Engineering

A conventional lens works by routing all the light falling upon it through different paths so that the whole light wave arrives at the focal point at the same time. It is manufactured to do so by adding an increasing amount of delay to the light as it goes from the edge to the center of the lens. This is why a conventional lens is thicker at its center than at its edge.

With the goal of inventing a thinner, lighter, and cheaper lens, Yu’s team took a different approach. Using their expertise in optical “metasurfaces”—engineered two-dimensional structures—to control light propagation in free space, the researchers built flat lenses made of pixels, or “meta-atoms.” Each meta-atom has a size that is just a fraction of the wavelength of light and delays the light passing through it by a different amount. By patterning a very thin flat layer of nanostructures on a substrate as thin as a human hair, the researchers were able to achieve the same function as a much thicker and heavier conventional lens system. Looking to the future, they anticipate that the meta-lenses could replace bulky lens systems, comparable to the way flat-screen TVs have replaced cathode-ray-tube TVs.

“The beauty of our flat lens is that by using meta-atoms of complex shapes, it not only provides the correct distribution of delay for a single color of light but also for a continuous spectrum of light,” Yu says. “And because they are so thin, they have the potential to drastically reduce the size and weight of any optical instrument or device used for imaging, such as cameras, microscopes, telescopes, and even our eyeglasses. Think of a pair of eyeglasses with a thickness thinner than a sheet of paper, smartphone cameras that do not bulge out, thin patches of imaging and sensing systems for driverless cars and drones, and miniaturized tools for medical imaging applications.” 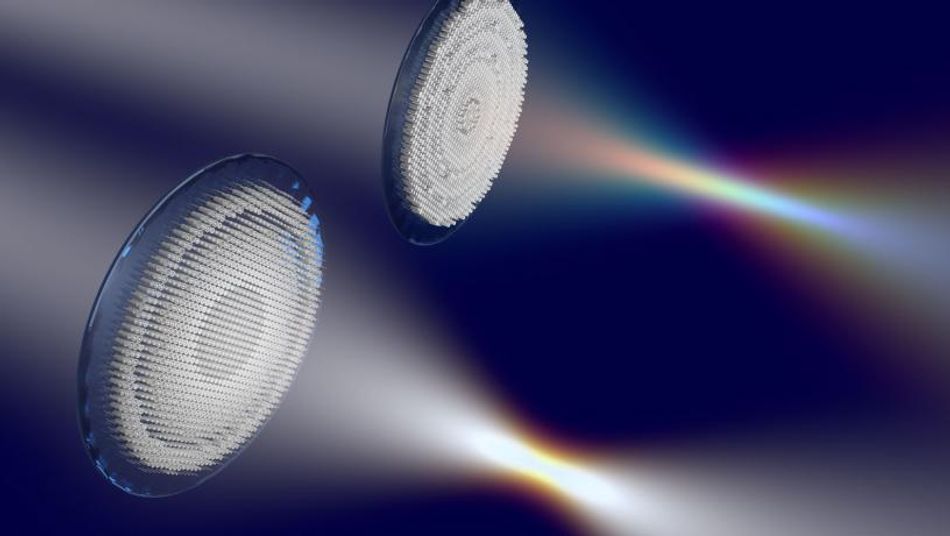 Illustration showing a comparison between two types of flat lenses. In the foreground, a new type of flat lens focuses all colors of light to the same spot. As a comparison, the flat lens in the background is not color-corrected.

Yu’s team fabricated the meta-lenses using standard 2D planar fabrication techniques similar to those used for fabricating computer chips. They say the process of mass manufacturing meta-lenses should be a good deal simpler than producing computer chips, as they need to define just one layer of nanostructures—in comparison, modern computer chips need numerous layers, some as many as 100. The advantage of the flat meta-lenses is that, unlike conventional lenses, they do not need to go through the costly and time-consuming grinding and polishing processes.

“The production of our flat lenses can be massively parallelized, yielding large quantities of high performance and cheap lenses,” notes Sajan Shrestha, a doctoral student in Yu’s group who was co-lead author of the study. “We can therefore send our lens designs to semiconductor foundries for mass production and benefit from economies of scale inherent in the industry.”

Because the flat lens can focus light with wavelengths ranging from 1.2 to 1.7 microns in the near-infrared to the same focal spot, it can form “colorful” images in the near-infrared band because all of the colors are in focus at the same time—essential for color photography. The lens can focus light of any arbitrary polarization state, so that it works not only in a lab setting, where the polarization can be well controlled, but also in real world applications, where ambient light has random polarization. It also works for transmitted light, convenient for integration into an optical system.

“Our design algorithm exhausts all degrees of freedom in sculpting an interface into a binary pattern, and, as a result, our flat lenses are able to reach performance approaching the theoretic limit that a single nanostructured interface can possibly achieve,” Adam Overvig, the study’s other co-lead author and also a doctoral student with Yu, says. “In fact, we’ve demonstrated a few flat lenses with the best theoretically possible combined traits: for a given meta-lens diameter, we have achieved the tightest focal spot over the largest wavelength range.”

Adds University of Pennsylvania H. Nedwill Ramsey Professor Nader Engheta, an expert in nanophotonics and metamaterials who was not involved with this study: "This is an elegant work from Professor Nanfang Yu’s group and it is an exciting development in the field of flat optics. This achromatic meta-lens, which is the state-of-the-art in engineering of metasurfaces, can open doors to new innovations in a diverse set of applications involving imaging, sensing, and compact camera technology.”

Now that the meta-lenses built by Yu and his colleagues are approaching the performance of high-quality imaging lens sets, with much smaller weight and size, the team has another challenge: improving the lenses’ efficiency. The flat lenses currently are not optimal because a small fraction of the incident optical power is either reflected by the flat lens, or scattered into unwanted directions. The team is optimistic that the issue of efficiency is not fundamental, and they are busy inventing new design strategies to address the efficiency problem. They are also in talks with industry on further developing and licensing the technology.