A research team from ITMO University has come up with a new technology for creating diffraction and microoptical elements on glass for use in photonics, laser systems and microfluidics. With its help, various diffraction elements for laser beam profile transformation and splitting can be produced fast and without much expense. ITMO.NEWS met with  the researchers to find out what gives their idea an advantage compared to the traditional methods of transparent materials processing.

Laser technologies gained importance a long time ago: with their help the quality of a detail’s surface can be evaluated, the surface can be processed and pictures etched on it. In order to do it well, it’s often necessary to change the laser beam’s profile. It can be done by certain optical elements: diffraction gratings, phase converters and various micro-optical elements that are produced on glass.

“Nowadays, it’s not hard to create high-power laser radiation sources,” says Maksim Sergeev, a researcher at ITMO University. “However, such lasers usually have low beam quality. For materials processing, laser beams with complex phase orientation and polarization are used more and more often. This requires high quality radiation output. Improvement of the quality, as well as the creation of vortex and vector laser beams, is achieved with the help of phase converters, for instance, those in the form of diffraction optics elements.”

The researcher adds that such elements are able to change the direction of polarization and the wave front phase in the beam cross section by twisting it in circle, spiral or some more complex trajectory. Phase converters also allow us to split one laser beam into several .

“Such tasks are relevant in multipath laser processing and multipath interference scheme technologies, as well as for creating holograms. Just imagine, by splitting one laser beam into 10-50 separate beams with equal intensity, you perform the processing 50 times faster,” he says.

However, the creation of such microoptical elements is a difficult and expensive process. For example, to create the most simple diffraction grating, you would need to change the surface relief of the glass at the micro and nanoscale level. Elements that are etched that way can be barely seen. 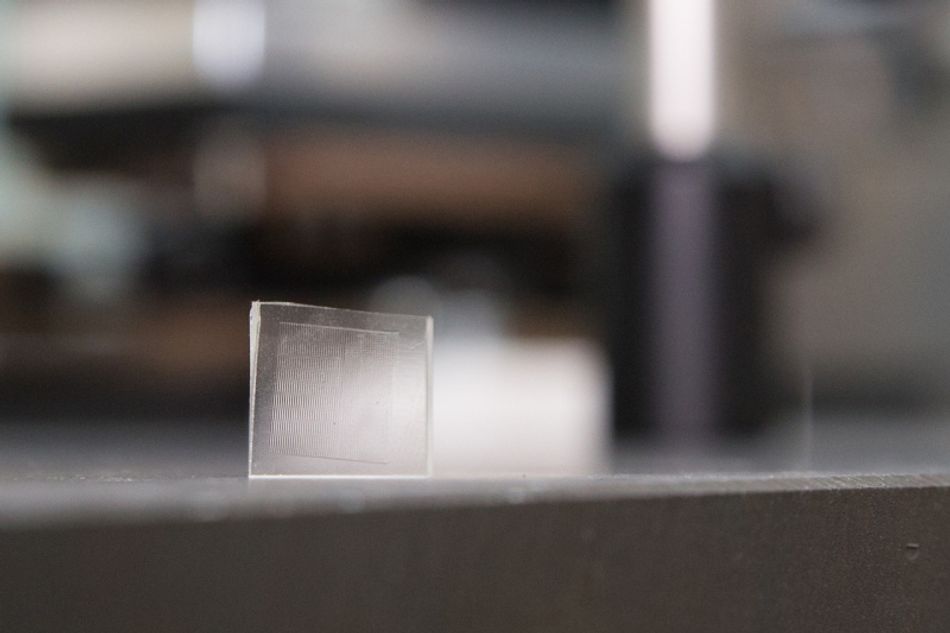 “Glass is a quite hard yet fragile material,” he explains. “That’s why its mechanical processing is rather difficult: there’s a high possibility of destruction due to microfractures, chips, and inner tension. If we’re talking about glass processing technologies, then its typical radiation sources are either quite peculiar (excimer lasers), expensive (pico- and femtosecond lasers), complex to operate, or don’t provide proper processing quality for phase converters (CO2 lasers).”

Scientists have proposed an alternative method for which the most common fiber laser with a near infrared wavelength can be used. This method is based on the fact that if radiation is applied to a target under the glass, a high-temperature plasma torch plasma occurs on its edges, creating intense pressure on the glass.

The research team started to work on problems of that kind long ago. One of the very first laser material processing examples was presented in the end of the ‘60s under professor Vadim Veiko’s guidance. Over the past seven years of research it has been proven that it’s possible to create microlens arrays, phase diffraction gratings, random and spiral phase plates, homogenizers and diffusers.

“A proposal was made to use laser-initiated microplasma for glass processing,” says Maksim Sergeev. “Plasma is a partially or entirely ionized substance with high temperature and tension. It’s possible to initiate plasma by rapidly heating the material, while laser nanosecond impulses are focused on the surface of the target, which will intensively absorb radiation. In the laser processing area a small bright spot or a torch can be visually observed. If you put a transparent material, for example, quartz glass, on the surface of such a target, the laser radiation passing through it will form a plasma torch, which will process the glass by creating a micro- and nanorelief on its surface.”

The researchers have used custom high-carbon targets for plasma formation. Carbon is a cheap, optically close to the black body material, and therefore it absorbs laser radiation efficiently. According to preliminary evaluation and experimental data, around 90% of laser radiation energy is being transformed into microplasma and is spent on the glass processing, which is commensurate with the glass processing performed by ф CO2 laser, in which case around 85% are spent.

“We have studied the way the speed of glass relief creation depends on the amount, energy, length of the laser impulses,” says research team member, ITMO University’s PhD student Vladimir Rymkevich. “We had placed a glass on a graphite plate and performed laser radiation processing on the edge between the glass and the graphite. We had to develop software that allowed us to systematize experimental data and put it into one database with modes and results of the glass processing.”

During the experiment, it was discovered that, as long as the frequency is not very high, there’s a linear dependence between the amount of impulses and the speed of relief formation in the glass.

“Easily put, the more laser impulses there are, the quicker the hole gets bigger,” he explains. “However, after a limit of a bit more than 700 impulses is reached, the speed stabilizes. If there’s more than 1,000 impulses, the process turns unstable. That way, we’ve determined operating modes of the relief etching from 50 to 1,000 nm with intervals of 50 nm.”

The entire experiment took a little bit over an hour: a 30-second pause between each impulse was necessary for the glass to cool down so that its temperature wouldn’t interfere with the experiment. However, researchers note that in the industrial environment diffraction grating or some other microoptical element can be created in several minutes.

For instance, creating a laser radiation homogenizer with an area of 5mm² can take as little as ten minutes. Etching more complex phase converters, for example, for steel plates that are created on icelandic spar, which is more fragile crystal material, can take around 40 minutes.

“Creation of a slot with a depth of one micron and a length of up to 50mm takes no more than 30 seconds,” says Vladimir Rymkevich. “Optical elements, such as phase plates for correcting a laser beam, can be produced in about five to ten minutes. For comparison, the photolithography process, which is another option for such cases, includes many steps that take significantly more time.” 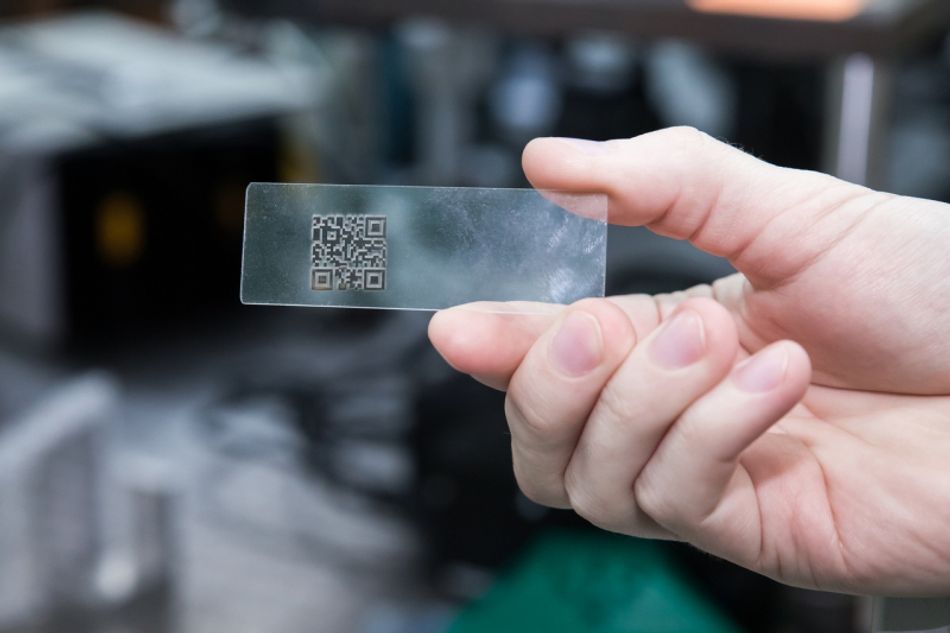 Other ways to use it

With the help of the proposed technology, thin layers of glass from 50 nm to 10 μm can be removed. This can be useful not only in microoptics. For instance, some biological and chemical reactions require miniature transparent microchips that consist of microscopic channels and microcavities: containers or microchemical reactors. Inside them, chemical and biological reactions can be conducted with minimum reagent and analyte waste, and it’s also possible to see the result of mixing.

“If you create a 10 µm deep and 20 µm wide slot in the glass, and then cover it with another glass plate, you’ll get a new microchannel,” says ITMO University researcher Roman Zakoldaev. “Through this channel you can transmit various fluids, move it to a microcavity, compile two channels with each other to mix the fluids and so on. Such microchips or “chip laboratories” are in demand in microbiology, chemistry and medicine. When we’re trying to create a medicine but the ingredients are so expensive that we have less than one gram, or the compounds are rather dangerous, we need to measure it with extreme precision and follow the process the whole time. In such cases microsystems of that kind are irreplaceable.”

With the help of the researchers’ technology it’s possible to process not only glass plates, but also quartz fibre. It was proven recently, in the course of creating interferometric sensors, that these sensors are able to change the optical properties of fluids and external environment temperature.

“By replacing the glass plate with quartz fibre and with the help of laser-induced microplasma, you can create microsized holes in the fibre. Holes of certain depth, form and position can be used as interferometers. When their depth reaches the core of the fibre, light seeps through the edge between the core and the shell and passes through the fibre environment. After that, the light connects with the initial light in the fibre. As a result, interference occurs. If you register and analyze it, it will lead you to conclusions about the environment inside the hole,” Maksim Sergeev explains.

The researchers are currently working on their technology: they are expanding its capabilities and looking for new ways to use it. They aim to publish several papers on laser-induced microplasma and material processing in the near future.

Researchers have demonstrated an integrated technique for monitoring specific biomolecules – such as growth factors – that could indicate the health of living cell cultures produced for the burgeoning field of cell-based therapeutics.