In a hypothetical two-dimensional world, however, there would be an infinite number of additional options, referred to as anyons. These theorized particles are characterized by how moving them around one another manipulates quantum information. With access to the right system of anyons, ultrafast error-free quantum computing would be possible.

Recent work by Erich Mueller, professor in the Department of Physics, and doctoral student Shovan Dutta, takes an important step toward this goal by proposing a new way to produce a specific quantum state, whose excitations act as anyons.

Their paper, “Coherent Generation of Photonic Fractional Quantum Hall States in a Cavity and the Search for Anyonic Quasiparticles,” was published March 15 in Physical Review A, a publication of the American Physical Society.

The technique involves an “optical cavity” formed by ultra-high reflective mirrors that confine light to a plane. They describe illuminating the cavity with lasers in such a way that the particles of light (photons) act as if they’re particles of matter, living in a two-dimensional world. It’s a manifestation of the wave-particle duality, a key principle of quantum mechanics.

Dutta said their work builds on 15 years of previous theory and experimentation, some of it in the Mueller group.

“People have been producing the different ingredients that you need to get to this stage,” he said. “They’ve been going step-by-step; what we tried to do was to get some of those ideas, and put in some new ideas of our own, and go all the way to the creation of anyons and how you measure their properties, giving a complete picture.” 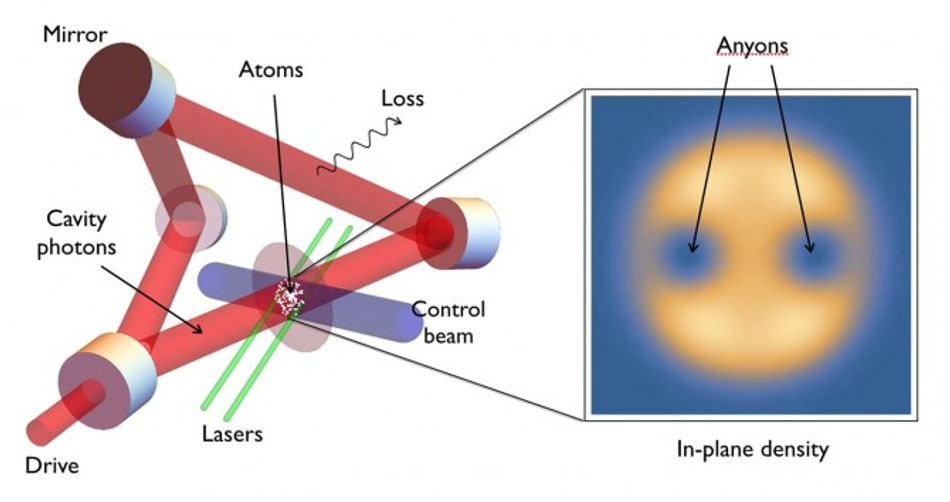 A schematic illustration of the proposed experiment: Anyons are formed in the waist of an optical cavity by carefully positioning a set of high-quality mirrors. Injecting photons into the cavity builds up a quantum state containing anyonic excitations.

Mueller said their protocol represents a “dramatic increase in the plausibility of the approach” to creating the quantum state necessary for anyons. While previous ideas have been mainly theoretical, this work proposes actual steps that scientists “can go and do in the lab in a year or two,” he said.

As a key part of their approach, Dutta and Mueller came up with a unique way of shining lasers on the cavity to sequentially inject photons, building up a particular quantum “fluid” with unusual excitations.

“You see these ripples, these waves and vortices on a film of photons,” Dutta said. “It looks just like a fluid.”

The vortex-like excitations are the desired anyons: They act like particles, but due to their collective nature, they behave like no known elementary particle. The study showed how one can produce these anyons using focused laser beams, and measure what happens when two of them are exchanged – a process known as “braiding.”

The experiment uses existing technology and can be considered the simplest braiding protocol – which forms the basis of topological quantum computing schemes.

Mueller said their work provides a sort of blueprint for future work involving other types of anyons and more complicated quantum states, which are necessary to realize fault-tolerant quantum computation. But the quasi-particle braiding “would look very similar to what we’ve done,” he said.

Dutta said they’ve solved some of the major technical issues that limited the applicability of the existing theoretical proposals.

“The advance in our case is twofold,” Dutta said. “Our protocol allows you to produce the state with very high fidelity, and the required experimental parameters are much less stringent than previous proposals.”

Circuit design offers a path to “spintronic” devices that use little electricity and generate practically no heat.