A monolayer of chromium iodide irradiated with circularly polarized light changes the direction of its magnetization. Illustration from the article in Physical Review B

Scientists Andrew Kudlis, Ivan Shelykh, and Ivan Iorsh from ITMO’s School of Physics and Engineering have proposed an innovative method for ultrafast magnetization switching in layered magnetic structures. The developed technique makes it possible to efficiently control memory cells and break the ground for fully optical methods of recording information in 2D materials. The article detailing the results of the study is published in Physical Review B, a peer-reviewed journal of the American Physical Society.

The electron is an elementary particle that has multiple properties, including an electric charge. How can they store information? It’s a well-known fact that capacitors are one type of device that can store electric energy. While charged capacitors represent a one or a zero depending on the arrangement, discharged ones are the exact opposite.

“An entire array of such capacitors gives us a chain of zeros and ones that we can use to encode some information. The same method lies at the core of the so-called dynamic random-access memory or DRAM,” explains Andrew Kudlis, a co-author of the article and a junior researcher at ITMO’s School of Physics and Engineering. 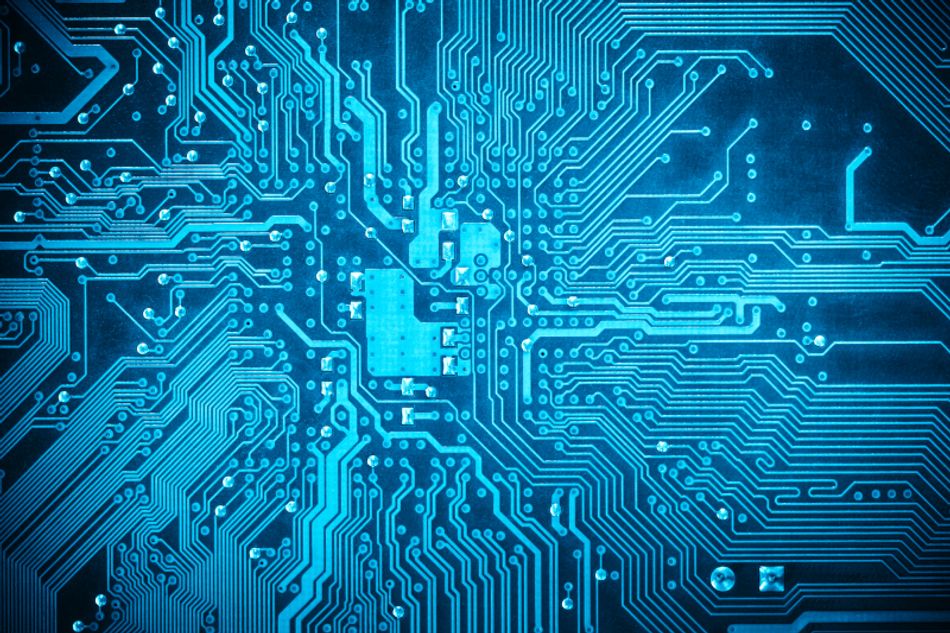 The sticks of RAM are always volatile. Over time, the capacitor charge begins to drain away due to various physical reasons. To that end, scientists have to constantly check whether it is within an optimal value or not. And, as we already explained, the recording is largely tied to the charge and discharge cycles and thus takes much time and energy.

The researchers turned to other properties of electrons to find a solution for these problems and proposed electron spins. Discovered early in the past century, spins are typical not only for electrons but for other particles, too. This purely quantum mechanical phenomenon is closely related to the magnetic moment. On top of that, spins are quantized. It means that they can only take on discrete values that can be conditionally called “up” or “down” or interpreted as ones and zeros. This particular feature is crucial for data storage.

However, it’s extremely difficult to deal with one spin. Scientists had to create special conditions (eg. ultra-low temperatures) in order to maintain the quantum mechanical state.

What is magnetization? And how can it be switched?

One of the solutions can be found at the macroscopic scale. Imagine some kind of a macroscopic object that possesses a sufficiently large number of particles endowed with a magnetic moment. Such systems will be marked by a certain macroparameter called magnetization – the density of magnetic moments in a substance.

“There are such materials as ferromagnets. These materials are known to have spontaneous magnetization. This phenomenon is caused not by the presence of an external magnetic field but the interaction of spins within a system. With these materials, scientists can create certain memory components, for instance, magnetoresistive RAM. Its structure resembles a multi-layer pie: two ferromagnetic layers and a dielectric one or any other combinations. Yet the magnetization direction of ferromagnets determines the electrical resistance of the middle layer. It can have either a high or low resistivity,” says Andrew Kudlis.

Non-volatility is the key strength of such a memory as there is no need to constantly supply energy to maintain a certain magnetization.

Unlike flash systems, ferromagnetic memory provides for an unlimited number of data recordings. With flash memory, each rewriting slightly damages a corresponding structural unit of the media (a floating gate transistor), which results in the eventual failure of solid-state drives. Ferromagnets do not have such a problem.

To put it simply, the lower layer can have a permanent magnetization, while the magnetization of the upper one can be changed. But how? One of the ways to do so is to transfer a current of polarized electrons to the upper layer of ferromagnets.

“The current can switch the magnetization of a layer given that it is fairly small. Its electrons acquire not only a charge but also polarization, for example, and as a result, its magnetization will be changed, too. The same can be done with the help of optical methods – polarized light emitted by a laser. The desired effect can be achieved under certain conditions. Thus, you can optically change the intensity of memory cells' resistance,” continues Andrew Kudlis.

How to switch magnetization optically?

What was meant by “certain conditions”? The irradiated sample should have both ferromagnetic and optical properties. One of the great examples is chromium(III) iodide (CrI3). This material is, on the one hand, a direct-gap semiconductor with large binding energy and giant oscillator strength and, on the other, a two-dimensional Ising ferromagnet. 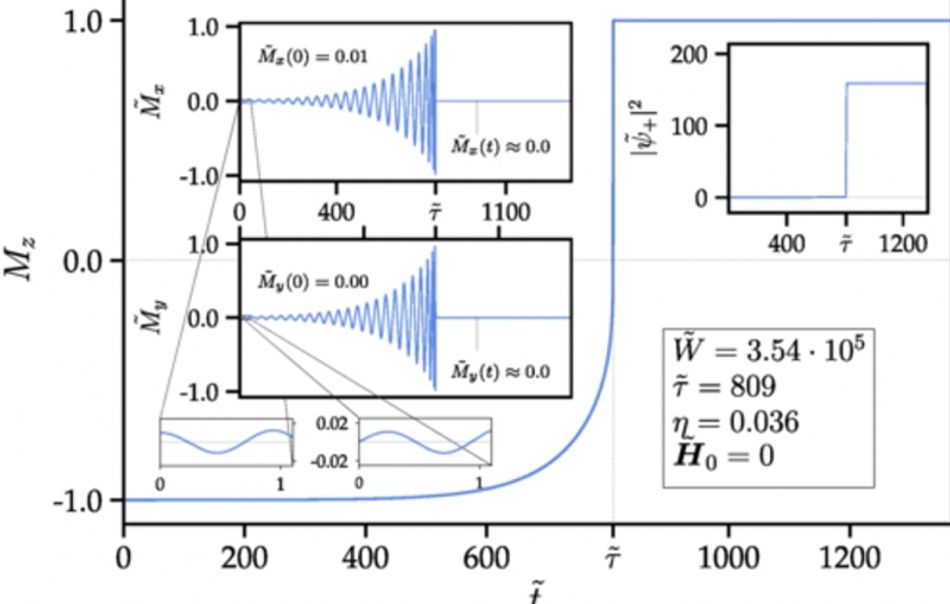 Behavior of various projections of magnetization, as well as the density of excitons with spin up over time. The initial state corresponds to the absence of excitons (electron-hole pairs) in the system, and the magnetization is directed downward. Within transition time, the direction of magnetization changes, and the concentration of excitons increases abruptly. Illustration from the article in Physical Review B

“These optical properties help to resolve specific peaks in optical spectra and make the method more user-friendly. This combination of characteristics allows scientists to optically change the orientation of the magnetization. In this process, we expose the material to laser radiation with certain polarization and at some point, we will observe how its magnetization switches. The transformation speed, of course, depends on the pumping intensity. Let’s dive a bit into the theory of it all. Through nonresonant optical pumping, the direct-gap semiconductor acquires some excitons, bound electron-hole pairs. They, in turn, have a certain spin, too. So, there are spins of electrons and excitons that need to be investigated separately,” says Andrew Kudlis.

According to Andrew Kudlis, the magnetization of 2D materials is typically directed downward. The light of right-hand circular polarization excites electrons from the valence to conduction band and thus produces excitons.

“This results in a new magnetic moment that can change the magnetization of electronic subsystems. And this is the technique that our article focuses on,” notes Andrew Kudlis.

Renewable energies: On the way to large-scale thermal storage

Together with partners, KIT is researching cost-effective and highly efficient heat storage systems of the next generation

Scientists overcome a hurdle on the path to renewable-energy storage

EPFL scientists have observed how catalysts behave at the particle level during water electrolysis. Catalysts play a crucial role in this reaction, in which water splits into hydrogen and oxygen.