Image by seagul from Pixabay

Extremely slippery surface coatings such as diamond-like carbon (DLC), hold great potential for extremely low-friction surfaces that are more efficient and durable in automotive systems, medical devices, advanced sensors and computer components, according to a team of researchers

Extremely slippery surface coatings such as diamond-like carbon (DLC), hold great potential for extremely low-friction surfaces that are more efficient and durable in automotive systems, medical devices, advanced sensors and computer components, according to a team of researchers from Penn State and University of California Merced. While attaining extremely low friction is possible in inert environmental conditions, this superlubricity is not observed in the presence of atmospheric moisture, which limits the effectiveness of DLC coatings.

“Friction is the root cause for parasitic energy loss of all engineering systems where two solid surfaces are sliding, rubbing or shearing each other,” Seong said. “Reducing friction can also alleviate wear of such systems too, improving the durability and reliability of engineering materials.”

Because the chemical bonding nature in DLC is complicated, Seong’s team turned to a much simpler and well-controlled system — a single-crystalline graphite surface where layers of graphene can be easily found — to study the origin of friction. Graphene is a 0.34 nm thick sheet of two-dimensionally bonded carbon atoms with the hexagonal symmetry. While it is known for the super-lubricity on the basal plane of graphite, friction at the location where the graphene sheet ends — called the step edge — is poorly understood.

Seong’s team studied friction of a graphene step edge using atomic force microscopy — scanning a sharp tip over a surface as it makes high-resolution measurements of local properties such as height and friction. They conducted the scans of the graphene step edge in dry and humid air conditions. 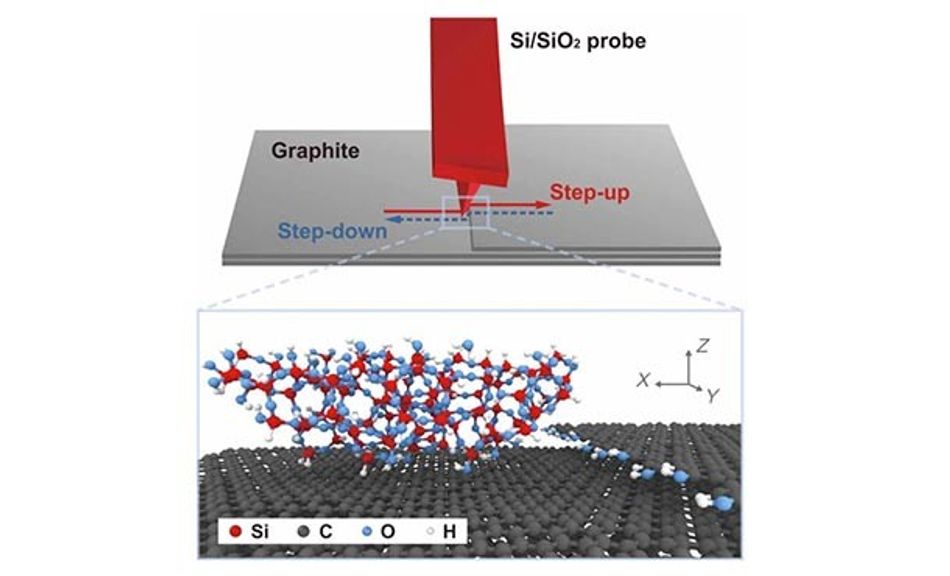 ﻿Schematic illustration and atomic-scale rendering of a silica AFM tip sliding up and down a single-layer graphene step edge on an atomically flat graphite surface. Image: Seong Kim

On a graphene step edge, the magnitude of friction depends on whether the step edge is exposed to air or buried under other graphene layers. The friction response of a buried step edge can be fully explained by the topographic effect of the 0.34 nm tall physical step.

“Topographic effect is similar to when you are pushing a heavy box downhill, you need less force because gravity helps you, but when pushing uphill, gravity causes you to use more force,”  Seong said. “Friction is measured when two surfaces move in the opposite direction. When a friction-probing surface is going uphill or up to the next layer from the step edge, friction goes up, and when it goes downhill or down to the next layer, friction goes down.”

Seong and his coworkers found that the graphene step edge exposed to air contains hydroxyl groups and their chemical interactions with the counter-surface can greatly enhance friction during the uphill motion even though the topographic height change is the same. It also creates resistive force even during the downhill motion. This discovery explains why friction is high on surfaces with defects, step edges or contaminants that can have chemical interactions with the counter-surface. In contrast, the researchers found when there are no chemical interactions between two surfaces, small topographic corrugations do not increase friction substantially.

“This implies that it is more important to make a chemical-interaction-free surface than a topographically smooth surface in order to achieve ultra-low friction,” Seong said.

Seong added that the atomic and molecular insights obtained from the research would help materials scientists and engineers to design graphene and other surfaces with lower friction. This in turn could lead to development of engineering materials that are more energy efficient and durable due to their super-low levels of friction.

“Automotive systems, aeronautics, medical devices, advanced sensors and computer components are just some of the sectors that would definitely benefit from development of any material that minimizes the wear and friction of surfaces,” Seong said.

A new twist on 2D materials may lead to improved electronic, optical device...