Close-​up of the new dual-​mode chip. The measurement area in the centre of the image (green) is 2 x 4 millimetres. (Photograph: ETH Zurich / Xinyue Yuan)

For over 15 years, ETH Professor Andreas Hierlemann and his group have been developing microelectrode-array chips that can be used to precisely excite nerve cells in cell cultures and to measure electrical cell activity. These developments make it possible to grow nerve cells in cell-culture dishes and use chips located at the bottom of the dish to examine each individual cell in a connected nerve tissue in detail. Alternative methods for conducting such measurements have some clear limitations. They are either very time-consuming - because contact to each cell has to be individually established - or they require the use of fluorescent dyes, which influence the behaviour of the cells and hence the outcome of the experiments.

Now, researchers from Hierlemann’s group at the Department of Biosystems Science and Engineering of ETH Zurich in Basel, together with Urs Frey and his colleagues from the ETH spin-off MaxWell Biosystems, developed a new generation of microelectrode-array chips. These chips enable detailed recordings of considerably more electrodes than previous systems, which opens up new applications.

As with previous chip generations, the new chips have around 20,000 microelectrodes in an area measuring 2 by 4 millimetres. To ensure that these electrodes pick up the relatively weak nerve impulses, the signals need to be amplified. Examples of weak signals that the scientists want to detect include those of nerve cells, derived from human pluripotent stem cells (iPS cells). These are currently used in many cell-culture disease models. Another reason to significantly amplify the signals is if the researchers want to track nerve impulses in axons (fine, very thin fibrous extensions of a nerve cell).

However, high-performance amplification electronics take up space, which is why the previous chip was able to simultaneously amplify and read out signals from only 1,000 of the 20,000 electrodes. Although the 1,000 electrodes could be arbitrarily selected, they had to be determined prior to every measurement. This meant that it was possible to make detailed recordings over only a fraction of the chip area during a measurement. 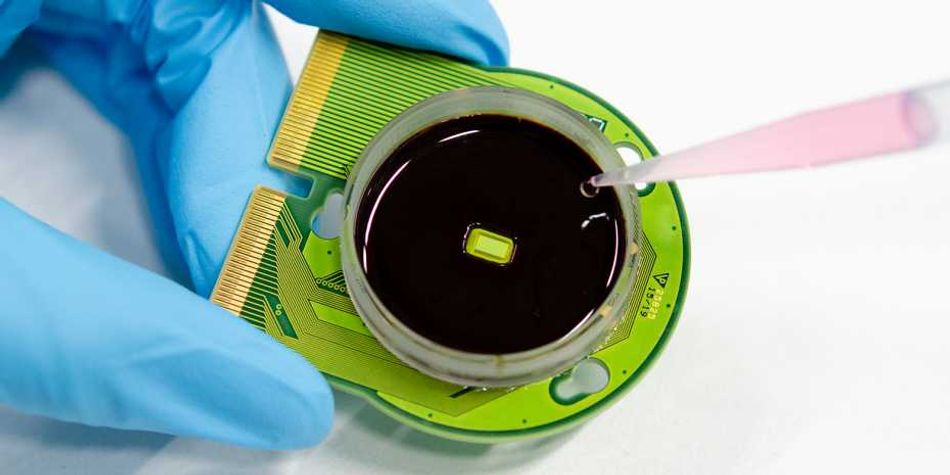 Measuring chip at the base of a cell-culture dish. (Photograph: ETH Zurich / Xinyue Yuan)

In the new chip, the amplifiers are smaller, permitting the signals of all 20,000 electrodes to be amplified and measured at the same time. However, the smaller amplifiers have higher noise levels. So, to make sure they capture even the weakest nerve impulses, the researchers included some of the larger and more powerful amplifiers into the new chips and employ a nifty trick: they use these powerful amplifiers to identify the time points, at which nerve impulses occur in the cell culture dish. At these time points, they then can search for signals on the other electrodes, and by taking the average of several successive signals, they can reduce the background noise. This procedure yields a clear image of the signal activity over the entire area being measured.

In first experiments, which the researchers published in the journal Nature Communications, they demonstrated their method on human iPS-derived neuronal cells as well as on brain sections, retina pieces, cardiac cells and neuronal spheroids.

With the new chip, the scientists can produce electrical images of not only the cells but also the extension of their axons, and they can determine how fast a nerve impulse is transmitted to the farthest reaches of the axons. “The previous generations of microelectrode array chips let us measure up to 50 nerve cells. With the new chip, we can perform detailed measurements of more than 1,000 cells in a culture all at once,” Hierlemann says.

Such comprehensive measurements are suitable for testing the effects of drugs, meaning that scientists can now conduct research and experiments with human cell cultures instead of relying on lab animals. The technology thus also helps to reduce the number of animal experiments.

The ETH spin-off MaxWell Biosystems is already marketing the existing microelectrode technology, which is now in use around the world by over a hundred research groups at universities and in industry. At present, the company is looking into a potential commercialisation of the new chip.