Aircraft maintenance is a physically challenging job. The heavy workload, combined with inherent risks associated with working at height, are contributing to a lingering shortage of trained aircraft sustainment personnel. Throughout the past year, these issues were compounded even further by the social-distancing restrictions caused by COVID-19, as replacing certain aircraft components can require at least two maintainers working side-by-side while at height.

This labor shortage is not just affecting commercial airlines; it’s also affecting the U.S. military. With approximately 13,000 aircraft in service across all branches of the military, active-duty maintainers play a critical role in mission readiness. As with any industry, an ongoing shortage of experienced personnel who can inspect and repair aircraft—as well as train newer maintainers--makes it more difficult for the military to achieve its readiness goals.

While the military has been using robotic systems for aircraft sustainment for the past several years, those systems are limited in their applications because they have fixed locations and require significant amounts of floor space. They also typically have a single purpose, such as sanding or welding. These systems also require to be used indoors and in consistent lighting, which prevents them from being used outdoors. 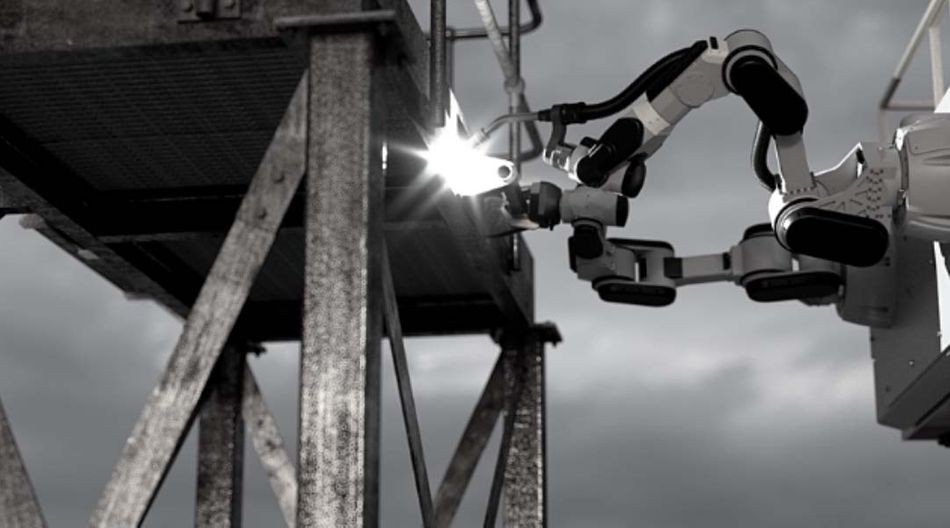 RE2 Sapien intelligent robotic arms can be used for a variety of complex indoor and outdoor applications, including working at height.

Unlike these traditional, fixed robots, RE2’s new brand of intelligent robotic arms, called RE2 Sapien™, acts as a force multiplier, increasing the productivity and safety of military personnel. With 6+ degrees of freedom and embedded intelligence, RE2 Sapien arms provide users with a second set of hands that is mobile, autonomous, and designed to be used with aviation maintenance tools. In addition, the system is environmentally hardened, so it can withstand extreme temperatures and varying environmental conditions. This enables the system to be used for a variety of complex indoor and outdoor aircraft maintenance applications, including refueling, making a variety of ground connections, replacing components, removing and reloading cargo, and working at height.

RE2 Sapien’s optimized strength-to-weight ratio can assist maintainers by holding aircraft components in place while personnel work on them—a capability that is particularly useful for heavy, bulky or generally difficult-to-maneuver components. By integrating with scissor lifts or other mobile elevated work platforms, the system can also reduce the number of maintainers who need to work at height, increasing overall safety of military personnel.

RE2 has a proven track record of partnering with the Air Force, Army, and Navy to develop state-of-the-art robotic arms that can perform dangerous tasks with dexterity and precision. Whether on land or underwater, our mission has remained the same: to develop robotic solutions that keep workers out of harm’s way.

Jonathan Brown, Business Development Manager, is responsible for managing RE2’s day-to-day business development activities focused on the Department of Defense (DoD). For more than 13 years, he has led proposal teams that have won multiple SBIR Phase I, II, and III contracts with multiple DoD agencies, including DARPA, Office of Naval Research, Army Telemedicine and Advanced Technical Research Center, and the Marine Corps Warfighting Lab. He received his M.B.A. from The University of Chicago Booth School of Business, and his B.A. from Connecticut College.

The Use of Robotics in the Non-Destructive Testing of Composites

The 5 Keys to Mobile Manipulation: The Ability to Interact

Mobile manipulators give users the ability to automate anywhere