Lithium metal batteries, capable of doubling the capacity of today’s standard lithium-ion cells, can be built utilizing much of the current battery manufacturing system, a finding from University of Michigan researchers that removes a major hurdle for automakers looking to embrace the next major evolution in energy storage technology for electric vehicles.

Lithium ion has long been the standard for powering all manner of consumer devices and, in recent years, it has been the go-to power source for electric vehicles. But the technology is nearing its peak in terms of the amount of energy it can store. It’s also known for causing onboard fires.

“Anode-less” lithium metal batteries may provide the next leap forward in battery technology for the electric vehicles that are increasingly replacing internal combustion cars and trucks on the road. And the new production technique, recently published in Nature Communications, represents a potential cost savings for automakers.

A team of researchers led by Jeff Sakamoto, a U-M associate professor of mechanical engineering, have previously demonstrated that batteries made with lithium metal anodes can safely double the output of similarly-sized lithium ion cells, which use graphite anodes. To do that, the team utilized a solid-state electrolyte known as LLZO, which takes the place of the liquid electrolytes found in commercial batteries. 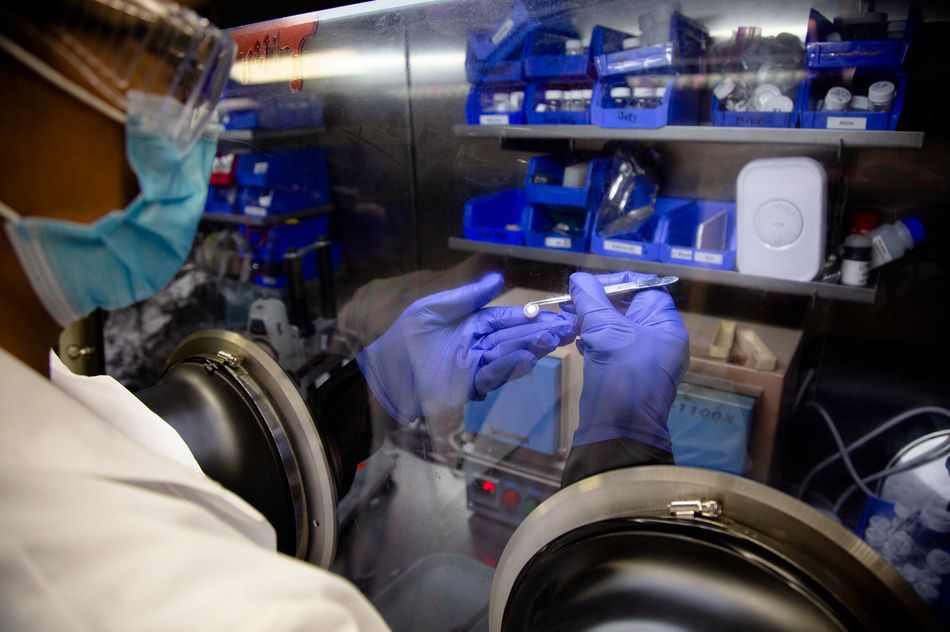 Michael Wang, materials science and engineering Ph.D. candidate, uses a glove box to inspect a lithium metal battery cell in a lab in the Michigan Memorial Phoenix Project building at the University of Michigan in Ann Arbor, Mich. on October 19, 2020.

But lithium metal is reactive and weak, making it extremely difficult to handle and integrate into batteries, especially using state-of-the-art manufacturing equipment.  U-M’s team has found a workaround that essentially allows the battery to build itself. Their approach harnesses the lithium already contained within common cathode materials. When the battery is charged for the first time, the lithium ions on the cathode side of the cell are extracted and moved to the anode side of the cell—effectively synthesizing a lithium metal anode.

“Because we can use electrochemistry to make the battery “build” its own lithium metal anode, we can completely eliminate that step of the manufacturing process. Thus we can manufacture batteries that are initially “anode-free,’” Sakamoto said.

In the 1980s, rechargeable lithium metal batteries that used liquid electrolytes were considered the next big thing, penetrating the market in early portable phones. But their propensity to combust when charged led engineers in different directions. The lithium atoms that shuttle between the electrodes tended to build tree-like filaments called dendrites on the electrode surfaces, eventually shorting the battery and igniting the flammable electrolyte.

By removing one key ingredient from the lithium ion’s three-component formula, the anode, U-M’s production method offers a potential reduction in manufacturing cost. And the fact the process can be completed using current lithium ion battery manufacturing means electric vehicle makers could adapt U-M’s technology without having to completely retool their facilities.

“There is already a lot of capital investment that has gone into lithium ion batteries,” Sakamoto said. “So if one were to think about replacing a current lithium ion battery with a new kind of battery, that requires a completely different approach to manufacturing, and a whole lot more investment has to go into that.

“Attempts to supplant incumbent battery technology requires dramatic improvements in performance, safety, and cost; a trifecta. In this study, we focused on reducing the cost by simplifying the manufacturing process of batteries using the holy grail anode—lithium metal. We hope the outcome of this work can enable substantial reductions in battery cost to achieve EV cost parity with internal combustion engine powered vehicles.   When this happens, the widespread adoption of EVs will, hopefully, be imminent.”

The potential cost savings generated by U-M’s technology could extend to consumers and governments as well. One of the major hurdles to more widespread adoption of electric vehicles is the current inadequate number of charging stations across the U.S. Areas without high volumes of car traffic are unlikely to offer as many options for charging, making them less welcoming for electric vehicles and causing what the industry refers to as “range anxiety.”

By doubling the range an electric vehicle can travel on a single charge, U-M’s battery technology could alleviate the anxiety by reducing the number of charging stations needed.

No battery, no wire, no problem