A group of researchers at ETH Zurich and Empa have now found a way to process cellulose using 3D printing so as to create objects of almost unlimited complexity that contain high levels of cellulose particles.

To do this, the researchers combined printing via direct ink writing (DIW) method with a subsequent densification process to increase the cellulose content of the printed object to a volume fraction of 27 percent. Their work was recently published in the Advanced Functional Materials journal.

The ETH and Empa researchers are admittedly not the first to process cellulose with the 3D printer. However, previous approaches, which also used cellulose-containing ink, have not been able to produce solid objects with such a high cellulose content and complexity.

The composition of the printing ink is extremely simple. It consists only of water in which cellulose particles and fibres measuring a few hundred nanometres have been dispersed. The cellulose content is in between six and 14 percent of the ink volume.

The ETH researchers used the following trick to densify the printed cellulose products: After printing a cellulose-based water ink, they put the objects in a bath containing organic solvents. As cellulose does not like organic solvents, the particles tend to aggregate. This process results into shrinkage of the printed part and consequently to a significant increase in the relative amount of cellulose particles within the material.

In a further step, the scientists soaked the objects in a solution containing a photosensitive plastic precursor. By removing the solvent by evaporation, the plastic precursors infiltrate the cellulose-based scaffold. Next, to convert the plastic precursors into a solid plastic, they exposed the objects to UV light. This produced a composite material with a cellulose content of the aforementioned 27 volume percent. “The densification process allowed us to start out with a 6 to 14 percent in volume of water-cellulose mixture and finish with a composite object that exhibits up to 27 volume percent of cellulose nanocrystals,” says Hausmann.

Elasticity can be predetermined

As if that were not enough, depending on the type of plastic precursor used, the researchers can adjust the mechanical properties of the printed objects, such as their elasticity or strength. This allows them to create hard or soft parts, depending on the application.

Using this method, the researchers were able to manufacture various composite objects, including some of a delicate nature, such as a type of flame sculpture that is only 1 millimetre thick. However, densification of printed parts with wall thickness higher than five milimeters lead to distortion of the structure because the surface of the densifying object contracts faster than its core. 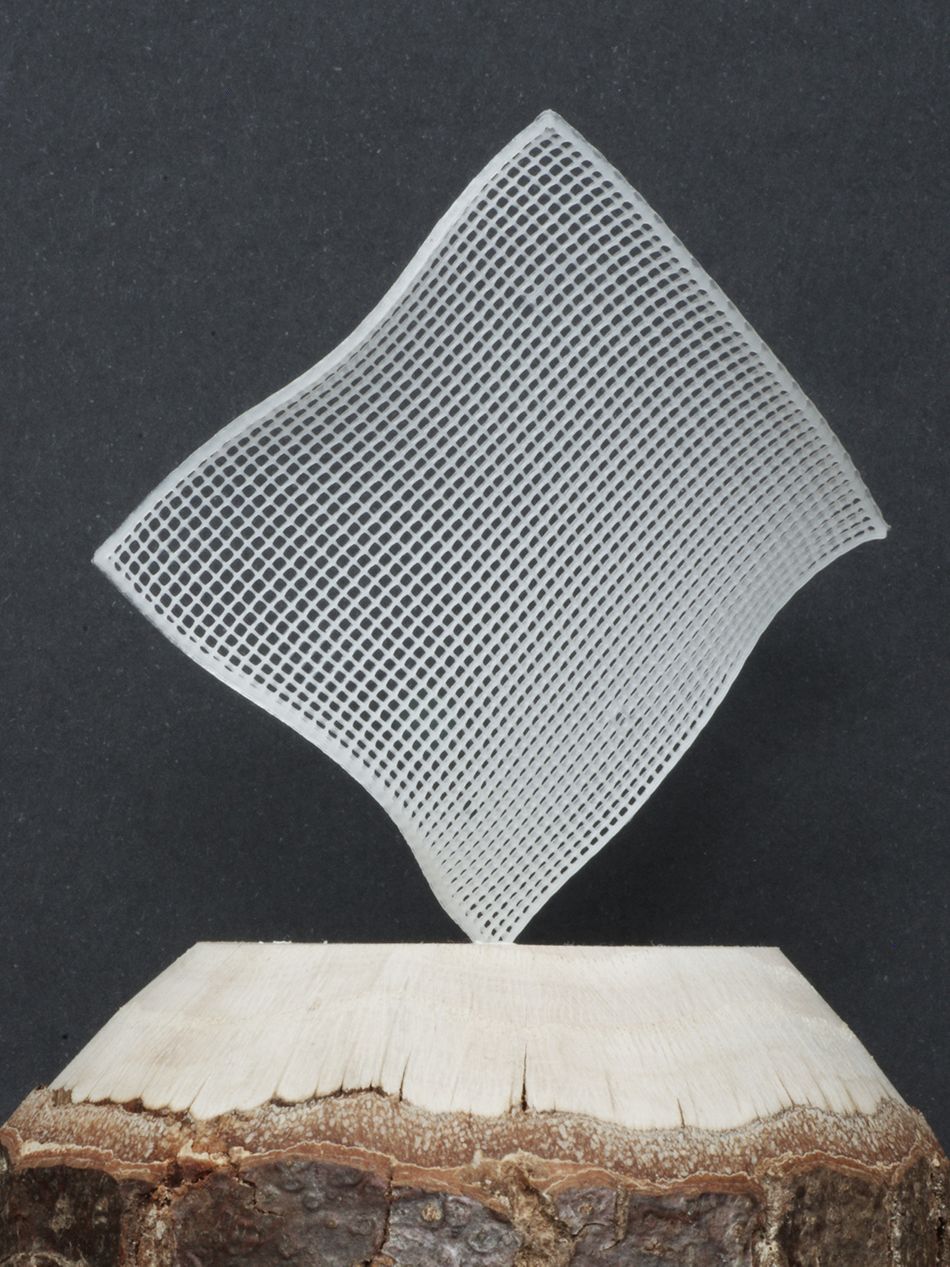 A filigree mesh. (all photos: M.Hausmann/ETH/Empa 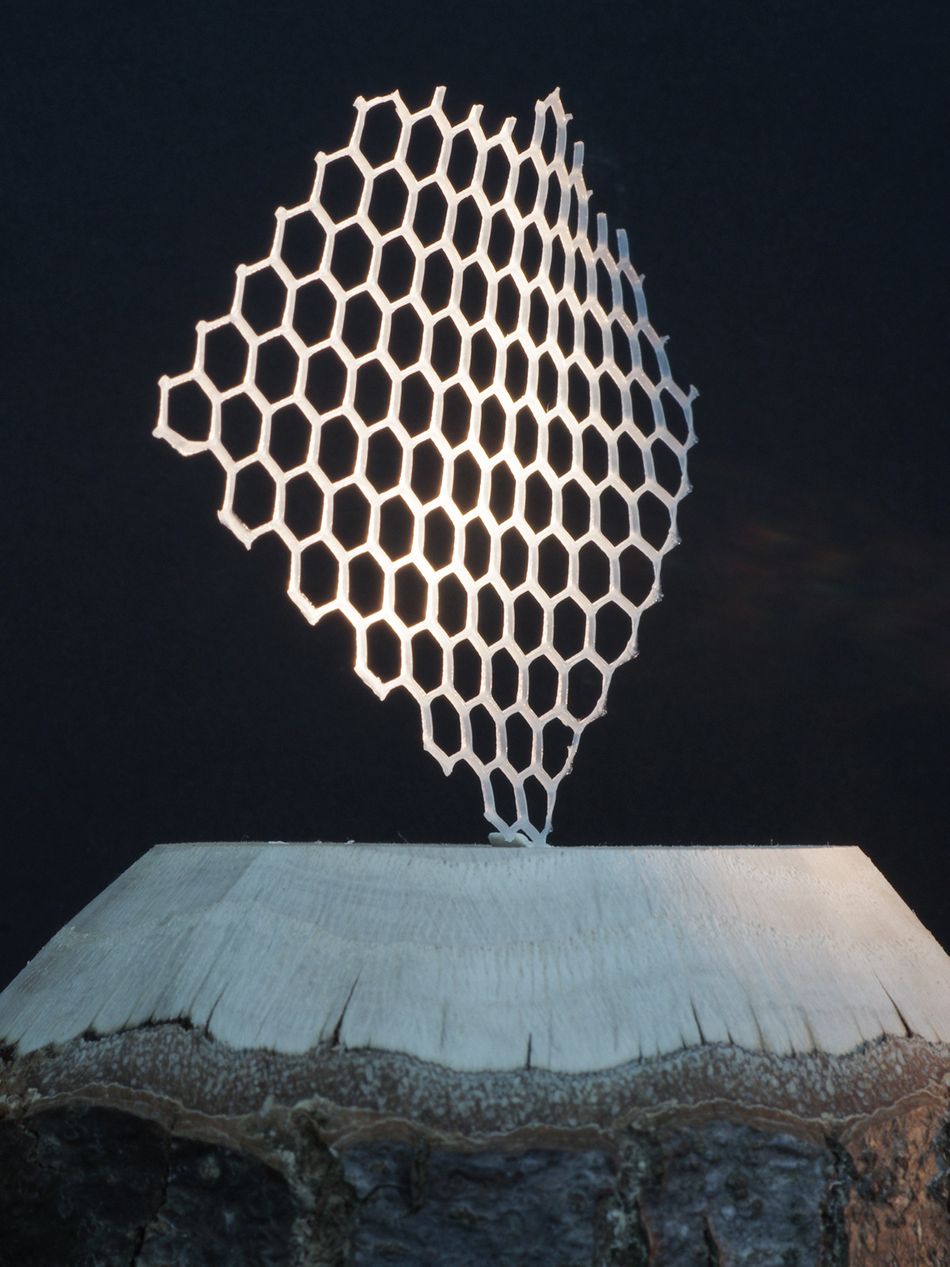 The researchers investigated their objects using X-ray analyses and mechanical tests. Their findings showed that the cellulose nanocrystals are aligned similarly to those present in natural materials. “This means that we can control the cellulose microstructure of our printed objects to manufacture materials whose microstructure resembles those of biological systems, such as wood,” says Rafael Libanori, senior assistant in ETH Professor André Studart’s research group.

The printed parts are still small – laboratory scale you could say. But there are many potential applications, from customised packaging to cartilage-replacement implants for ears. The researchers have also printed an ear based on a human model. Until such a product could be used in clinical practice, however, more research and, above all, clinical trials are needed.

This kind of cellulose technology could also be of interest to the automotive industry. Japanese carmakers have already built a prototype of a sports car for which the body parts are made almost entirely of cellulose-based materials.

UV resistance refers to a substance’s ability to resist ultraviolet (UV) light, including sunlight. UV light can cause discoloration or degradation in a final part.