Kent orchards can be surveyed before harvest for accurate yield estimates

Outfield has enormous aerial view images of orchards that are millions and millions of pixels and it wants to detect each blossom flower or each piece of fruit to calculate how many of them there are.

Outfield Technologies' founders Jim McDougall and Oli Hilbourne have been working with PhD student Tom Roddick from the Department’s Machine Intelligence Laboratory to develop their technology capabilities to be able to count the blossoms and apples on a tree via drones surveying enormous apple orchards.

"An accurate assessment of the blossom or estimation of the harvest allows growers to be more productive, sustainable and environmentally friendly", explains Outfield’s commercial director Jim McDougall.

"Our aerial imagery analysis focuses on yield estimation and is really sought after internationally. One of the biggest problems we’re facing in the fruit sector is accurate yield forecasting. This system has been developed with growers to plan labour, logistics and storage. It’s needed throughout the industry, to plan marketing and distribution, and to ensure that there are always apples on the shelves. Estimates are currently made by growers, and they do an amazing job, but orchards are incredibly variable and estimates are often wrong by up to 20%. This results in lost income, inefficient operations and can result in substantial amount of wastage in unsold crop." 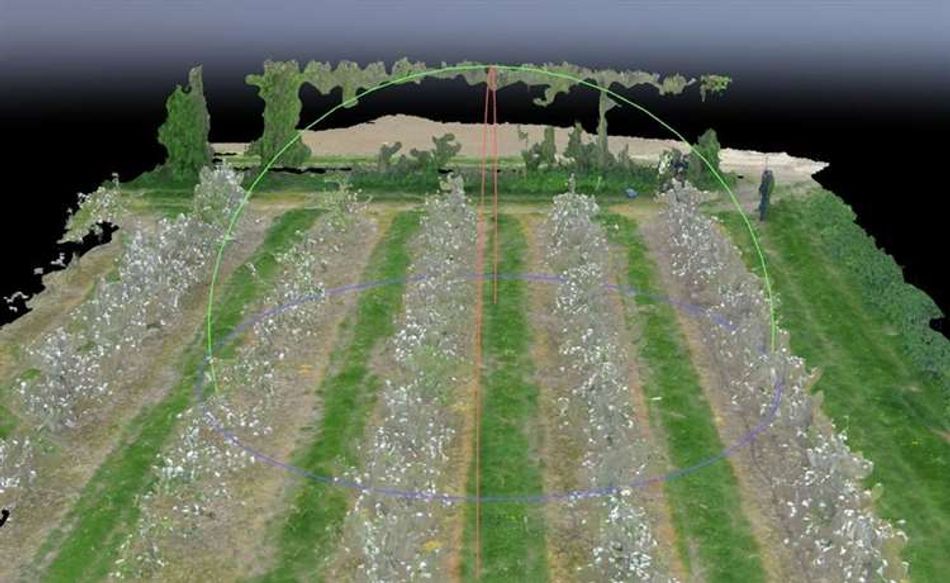 3D computer reconstruction of a UK orchard flowering in April 2019

Outfield’s identification methods are an excellent application of the research that PhD student Tom Roddick, supervised by Professor Roberto Cipolla, is working on. Tom is part of the Computer Vision and Robotics Group which focuses on solving computer vision problems by recovering 3D geometry, modelling uncertainty and exploiting machine learning. Much of the recent research within the group concentrates on the development and use of modern deep learning methods and, in particular, convolutional neural networks (CNNs).

CNNs are computational algorithms designed to recognise visual patterns in data. They consist of millions of artificial 'neurons' which process visual data in a manner very loosely inspired by real neurons in the brain. The patterns they recognise are numerical, into which all real-world data, be it images, sound, text or time series, is translated.

Such systems 'learn' to perform tasks by being shown huge numbers of labelled examples, rather than being programmed with task-specific rules. For example, the CNN might learn to identify images that contain apples by recognising features in images that have been manually labelled as either 'apple' or 'no apple', and then using these results to identify apples in other images. They do this without any prior knowledge of apples, for example, apple colours or shapes. Instead, they automatically generate identifying characteristics from the examples that they process.

CNNs learn to classify objects by first detecting simple patterns in the data, such as edges or shapes, and then gradually building a hierarchy of visual structures until complex objects like faces or trees emerge. CNNs have been used to help solve a variety of problems, including computer vision, speech recognition, machine translation, playing board and video games and medical diagnosis.

During his PhD, Tom has been working on autonomous driving, looking at street scenes captured on camera, annotating and labelling each element. He pinpoints where the cars are, the pedestrians, the kerb etc. To do this he uses a deep learning technique called semantic segmentation, based on the pioneering SegNet algorithm developed in the group, to label each individual pixel to give a high level understanding of what is going on in the scene. Outfield need to identify apples and blossom in their orchard photographs and one way to do that is to use this semantic segmentation method.

Another aspect of Outfield’s data collection method is to pinpoint where their drones are at all times and there is another strand of computer vision that concentrates on localisation, working out where you are in the world and what you are looking at. Alumnus Kesar Breen, independent machine learning and computer vision consultant, has taken time out of his busy schedule to advise Jim and Oli. Kesar has helped them with an overview of the technologies that they could be using for the orchard modelling and analysis to find out where the crops are, and drafted a potential algorithm to do this, with time frames and requirements. Kesar says, "Outfield is doing some very cool stuff working with some interesting but proven technologies, on an important business problem. I think it is very likely to be commercially viable."

Talking about his work with Outfield, Tom says, "Outfield’s semantic segmentation needs have some very specific subtleties that are very interesting from a research point of view for example. I am used to looking at images to identify large objects such as cars, which are easy to spot, but what Outfield has are these huge aerial view images of orchards that are millions and millions of pixels and it wants to detect each blossom flower or each piece of fruit to calculate how many of them there are.  I have been looking at how to do that efficiently and robustly to be able to distinguish between things like; is this an apple on a tree? Or is this an apple on the ground?"

"We have a robust plan for the next two to three years, and we are opening an investment round in October 2019 to close in Q1 2020. This will allow us to bring onboard more of the team full time and test the products out at scale in New Zealand and the UK over the next year."

Scholars propose a way to help mobile robots choose when to communicate with the cloud without latency or lost data issues.